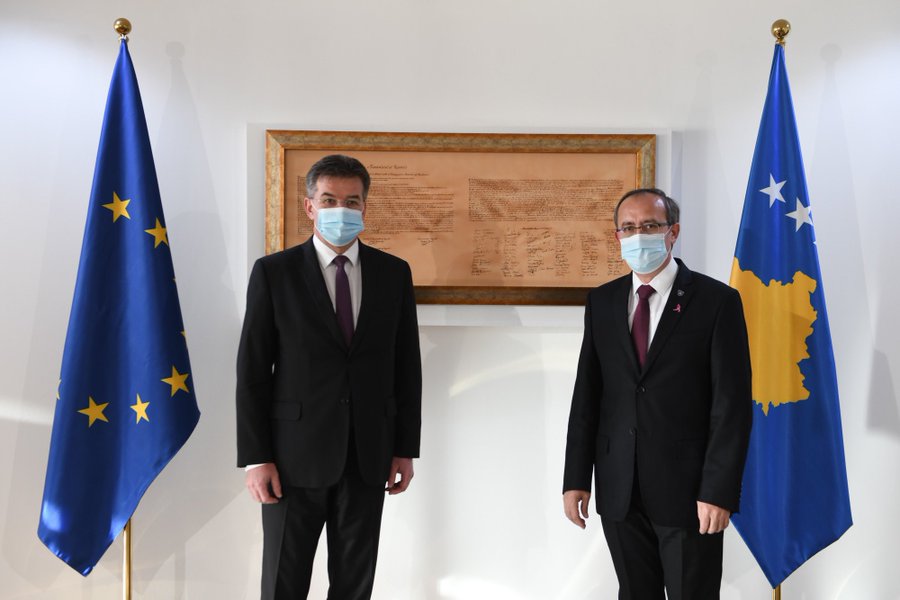 PRISTINA –  EU Special Representative for Belgrade-Pristina Dialogue Miroslav Lajčák wrote on his Twitter account that the second day of his visit to Kosovo began with a working breakfast with representatives of international organizations, which are “eyes and ears” in Kosovo, FoNet reports.

“I briefed them on where we stand in the EU-facilitated dialogue and listened to their views and assessments as the eyes and ears in Kosovo,” wrote Lajčák.

Kicked off day 2️⃣ with a breakfast with the international organizations in Kosovo. I briefed them on where we stand in the 🇪🇺-facilitated Dialogue and listened to their views and assessments as the eyes and ears in Kosovo. pic.twitter.com/8vcWfV8D4E

Previous day, Lajčák met with the Prime Minister of Kosovo Avdullah Hoti and the Speaker of the Parliament Vjosa Osmani. Today he will also meet with the President of Kosovo Hashim Thaçi and the leaders of political parties.

Hoti: There will be no CMS with executive powers

Hoti said at a press conference on Tuesday evening, after the meeting with Lajčák, that the Community of Serb Municipalities (CMS) will be as defined by the Constitutional Court of Kosovo and that there will be no CMS with executive powers.

According to Hoti, the Community of Serb Municipalities is a closed the topic with the Agreement from 2013, which was ratified in the Assembly of Kosovo, and the Agreement on Principles from 2015, and the opinion of the Constitutional Court of Kosovo.

“We have guarantees that the Community has no executive competence. We have removed the idea of ​​exchanging territories from the table, no one is talking about this topic. The unitary character of the state is not being discussed,” Hoti said.

We are discussing final agreements, for mutual recognition, said the Prime Minister of Kosovo.

“The principle agreed with our partners and facilitators in the dialogue is being applied, we do not agree on anything until we agree on everything. Nothing shall be applied until a final agreement on mutual recognition has been concluded and ratified by the Assembly. That is when the implementation will begin,” the Kosovo Prime Minister pointed out.

At the press conference, Hoti said that Kosovo does not block the dialogue in any way.

“Lajčák‘s visit comes at the right time to assess the dialogue process and plans for future meetings. There are difficult topics such as the Community, which we will approach in accordance with the obligations we have undertaken before the Assembly and before the citizens,” said Hoti.

The Prime Minister of Kosovo stated that he agreed with the international partners that Kosovo should sit at the negotiating table only for the sake of a final agreement on mutual recognition.

Stano: Respecting the Brussels Agreement is an obligation that must be fulfilled

However, EU officials told Kosovo that respecting the Brussels Agreement is an obligation that must be fulfilled, and that the issue of forming the Community of Serb Municipalities must be included in the framework of the comprehensive agreement being negotiated in Brussels, Koha reports.

EU Spokesperson for Foreign Affairs and Security Policy Peter Stano said that it is up to Kosovo to propose modalities, citing the obligations that Kosovo has undertaken since 2013, reports Kosovo Online.

“In 2013, Kosovo concluded an agreement on the establishment of the CMS. This agreement has been concluded in good faith by all parties involved. It was never canceled and withdrawn. In fact, the Assembly of Kosovo ratified the 2013 Agreement by a two-thirds majority. Thus, Kosovo has undertaken an international obligation to implement this agreement,” Stano said.

Earlier, it was stated from the Prime Minister Hoti’s office that the CMS would not be the topic of talks in Brussels, and confirmed that the obligation to establish the CMS would be fulfilled by respecting the constitution and the ruling of the Constitutional Court, which found violations in seven chapters of the August 2015 agreement.

Stano said that the decision of the Constitutional Court regarding the CMS is usually misinterpreted.

“The Court has never said that the Community cannot be established. We therefore expect Kosovo to honor the commitments it has made in the dialogue. The Community should be resolved as part of a comprehensive agreement, as agreed at the first meetings of leaders in July 2020, and then reaffirmed in the last round on September 7,” Stano emphasized.

Lajčák: EU has to lead the Dialogue

The process in the Belgrade-Pristina relations must be led by the EU, because the Union is the final destination for the parties involved, Lajčák said in an interview published today by the Slovak newspaper Pravda.

“I appreciate the goodwill of all our American friends and their efforts to help. At the same time, it is important to understand that the process in Kosovo-Serbia relations must be led by the European Union. Because the Union is the final destination for the parties involved “, stated Lajčák.

He added that it is clear that the activities of the USA are also a reflection of the election calendar, but that the EU welcomes any help.

Asked whether economic relations could create a platform for future dialogue between Pristina and Belgrade, Lajčák said it was important to see what would happen to infrastructure projects, such as roads and railways, listed in the economic normalization agreements Serbia and Kosovo signed in the presence of US President Donald Trump in Washington in September.

“All these projects already exist in the Union’s plans and have been financed,” Lajčák said.

He added that he is very cautious when it comes to the ideal scenario of the Belgrade-Pristina dialogue process, and that the EU can move as fast as its partners can.

“The EU is not interested in slowing down the process, but it is not possible to speed it up either. However, I believe we are talking about months, not years. The EU does not impose any text of the agreement. It is important for us that the agreements between Belgrade and Pristina lead to rapprochement with the EU, so that they are based on European standards. At the same time, and this is part of my mandate, the final document is intended to stabilize the situation in the region,”EU Special Representative emphasized.

He added that the normalization of relations between Kosovo and Serbia would be a great relief for the Western Balkans.