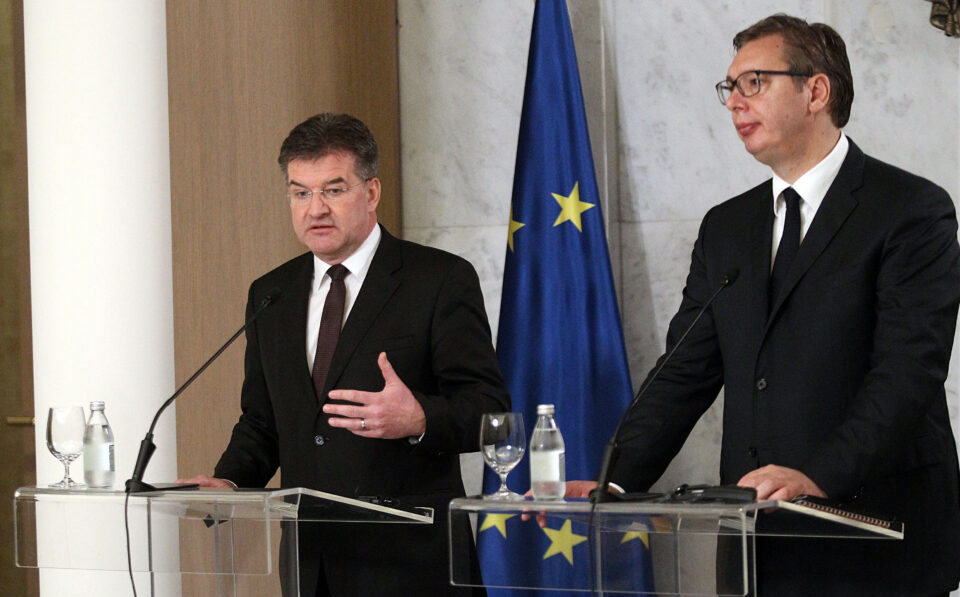 BELGRADE – EU Special Representative for the Belgrade-Pristina Dialogue Miroslav Lajčák, stated yesterday in Belgrade that the two sides in the negotiations should agree on what it means to normalize relations, FoNet reports.

After the meeting with the President of Serbia Aleksandar Vučić, Lajčák told journalists that the goal of the dialogue is the normalization of relations between Belgrade and Pristina, but that the EU cannot decide what normalization is.

He pointed out that the goal of the dialogue is to bring Serbia and Kosovo closer to EU membership.

Lajčák emphasized that Belgrade and Pristina are dealing with sensitive issues, financial claims, property problems and the Association of Serb Municipalities (ASM) in the dialogue.

“It is crucial that in the end there should not be any open unresolved issues,” said Lajčák, adding that they are now dealing with problems that were not part of the negotiations, but also with the agreed but unfulfilled elements.

He stated that everything that was agreed between Serbia and Kosovo must be implemented.

“What was agreed on the formation of the ASM should be realized. During my stay in Pristina, none of the interlocutors said that the obligations would not be fulfilled,” said Lajčák, adding that it is logical that the Kosovo Constitution will have to be changed.

No one in Pristina said that was not possible, Lajčák said.

“I am against setting artificial deadlines for ending the dialogue. It makes no sense to artificially speed up the process, it all depends on the two sides in the dialogue. I am convinced that the success of the dialogue will mean a lot for Serbia’s European path,” Lajčák concluded.

Vučič: We are ready to continue the dialogue

The President of Serbia Aleksandar Vučić stated that at the meeting with the EU Special Representative, it was agreed that Serbia would be fully committed to continuing the dialogue and seeking a compromise solution.

“We are ready to continue the dialogue, whenever Lajčák schedules it,” Vučić said.

Vučić assessed that Serbia’s position in the world will be stronger the closer it gets to the EU, and that this path is determined by the progress in relations with Pristina.

“We want a compromise solution to be reached, in order to normalize relations between Belgrade and Pristina. Whatever difficult talks we have, it is better to have a dialogue than not to talk, because in that situation, people’s lives, peace and stability may be endangered,” Vučić said.

He stated that Serbia insists on the full implementation of the Brussels Agreement and assessed that this is a condition without which there is no successful continuation of the dialogue.

“The essence of the Brussels Agreement is the formation of the Association of Serb Municipalities in Kosovo,” Vučić said, noting that Serbia had fulfilled all elements, while Pristina had done nothing in seven and a half years, claiming that it must respect the Kosovo Constitution.

“We want to build a common future with these people, and not to think about how someone will deceive someone,” said Vučić.

Petković: The ability of the EU as a facilitator in the dialogue to guarantee the implementation of the agreement is being tested

Lajčák also talked with the acting director of the Office for Kosovo and Metohija of the Government of the Republic of Serbia Petar Petković, about the continuation of the dialogue with Pristina and ways to solve the problem of Kosovo’s refusal to enable the formation of the ASM, it was stated from the Office.

Petković told Lajčák that the ASM must be formed immediately and with the competencies that belong to it according to the Brussels agreements, so now not only Pristina’s will to solve problems through dialogue is on the test, but also the EU’s ability as a facilitator in dialogue to guarantee implementation.

Petković pointed out that Belgrade, in the interest of the entire region, wants to continue the dialogue.

Thaçi: It is time to put mutual recognition on the table

The President of Kosovo Hashim Thaçi said yesterday that the Association of Serb Municipalities, which Serbia is trying to return to the negotiating table, is not a technical issue and that the Constitutional Court of Kosovo gave an opinion on that, reports Gazeta Express.

It is time to put mutual recognition on the table, Thaçi said, adding that Kosovo’s obligation is, in accordance with the opinion of the Constitutional Court, to implement the agreement on the establishment of the ASM.

He added that Kosovo Prime Minister Avdullah Hoti has reservations on the issue, but stressed that Kosovo must meet its obligations.

Speaking about recent visits to Brussels and Washington, Thaçi said that he discussed current events, and in Brussels he asked for visa liberalization. He stressed that the United States and the EU must harmonize in order for Serbia and Kosovo to reach a final agreement.

“It is important that an agreement is reached in the economic field, because the greater the economic development, the better life and peace we will have. The achievement in the White House is historic. The role of the United States in the political sphere is irreplaceable, but the United States and the EU must be coordinated,” Thaçi said.

He added that he clearly said in both centers of power that technical issues should not be discussed anymore, because they are “tedious and boring”, reports Kosovo online.

Hoti: Agreement in the spring

Kosovo Prime Minister Avdullah Hoti said that he expects the Belgrade-Pristina dialogue to end with mutual recognition in a few months, and the goal is for that to happen in the spring, reports Kosovo Online.

Hoti said that he would insist on receiving recognition from Serbia, because, as he stated, otherwise there would be no agreement.

“Either the dialogue will lead to an agreement with reciprocal recognition, or there will be nothing. During visits to the European capitals, I stated our principles and I am entering this process with them,” Hoti said.

He pointed out that this process ends with reciprocal recognition.

“In a few months, we will reach that point and conclude the process. The goal is spring, i.e. the first months of next year, and we will not continue in the second part of the year,” Hoti added.

He also pointed out that he would discuss the position of the President of Kosovo, in February or earlier, with the representatives of the opposition.