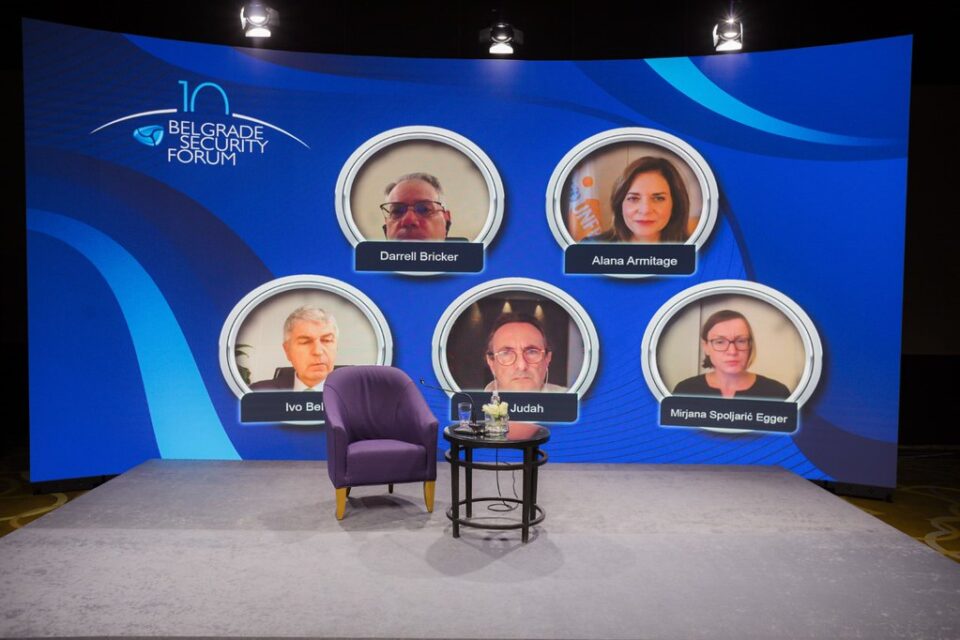 BELGRADE – The solution to the problem of depopulation does not lie in reversing the facts, but in building countries that people want to live in, in investments into human capital, women’s economic empowerment and “greening” the economies of the region, it was concluded on the panel entitled “The depopulation challenge: Shaping the future social, political and economic landscape” organised in partnership with UNDP and UNFPA  during the fourth day of the 2020 Belgrade Security Forum (BSF).

Darell Bricker, CEO of the Ipsos’ Public Affairs, said that the trends in population decline are undeniable and that Serbia is at the front end of that, adding that processes of urbanisation and education, especially education of women, can reverse this trend.

“Global fertility is collapsing. Our population is ageing, and our ability to reverse this trend is becoming less possible”, said Bricker.

Alanna Armitage, director of the UNFPA’s Regional Office for Eastern Europe and Central Asia, said that governments need to move beyond narrow and quick-fix approaches focused on population numbers towards comprehensive population and social policies focused on unleashing the potential of human capital.

“Comprehensive policy mix with a strong foundation in gender equality is most likely to ensure that people are able to have the number of children that they would like to have. UNFPA’s support to governments in the region is focused on ensuring access to sexual and reproductive health and rights, promoting gender equality and social inclusion of marginalised groups, developing gender responsive family policies and enabling young people to succeed”, she emphasised.

Ivo Belet, deputy Head of Cabinet to Vice President of the European Commission in charge of Democracy and Demography, added that the best solution to give to those people who are emigrating from the Western Balkans is to invest in the region, and to offer good proposals for investments in the area of infrastructure, connectivity and environment.

According to Armitage, Serbia is one of the countries that has recognised that demographic change has to be approached from a holistic matter, and that the answer to this problem is to make the countries in the region places that people want to live in.

“We need to create an environment where many more people are integrated and can flourish. Creating opportunities for young people is crucial – economic opportunities, but also opportunities to create a family. Studies show the economic effect of integrating women into labour market, but that requires affordable childcare”, Armitage added.

The panelists concluded that women’s economic empowerment and “greening” the economy are seen as factors that could accelerate the growth of the countries in the Western Balkans.

Is there a problem in communication between Serbia and the EU regarding the new methodology?