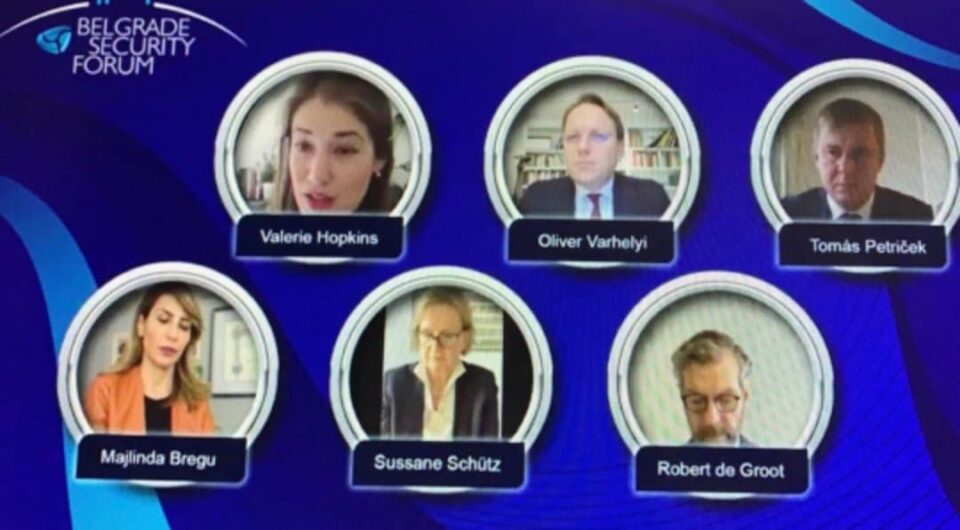 BELGRADE – Stability, security and prosperity of the Western Balkans is closely linked to the EU, therefore, we have worked on a renewed partnership with the region from the first day of this Commission, said EU Enlargement Commissioner Olivér Várhelyi during the Belgrade Security Forum 2020.

He reiterated that the Western Balkans has been a priority for this European Commission since the beginning of its mandate.

“First, we have adopted a new enlargement methodology based on the principles of increased credibility, transparency, predictability and political steer. Second, on the basis of the new methodology we proposed the opening of accession negotiations with Albania and North Macedonia, that was endorsed by European Council in March. Third, on 6 October we have adopted a major Economic and Investment Plan for the whole region, together with the annual reports on enlargement”, Várhelyi told.

According to him, the COVID-19 pandemic did not deter the EU from keeping the Western Balkans as a key priority for the European Union.

“The future of the whole region lies in the European Union and it is in our strategic interest to bring them closer to the EU, as it is in theirs to deliver on the reforms necessary to join us”, EU Enlargement Commissioner said.

Várhelyi emphasized that boosting investment and economic growth in the Western Balkans will only be possible if governments firmly commit to and implement fundamental reforms based on European values.

“Structural economic reforms, strengthening the rule of law and democratic principles, tackling corruption, improving public administration – reforms which are essential to ensuring long-term security and stability in the region”, he said.

“In times of crisis, to fight unemployment in the Western Balkans as a region, we first need mobility. If all WB6 would agree, mobility of professionals would be easier, someone from Pristina could work in Sarajevo or Belgrade”, she said.

She explained what will the common market, based on EU rules bring.

“Follow more closely the four freedoms which go hand in hand with the ‘mini-Schengen’ proposal. The business will better integrate into EU value chains, and boost GDP growth by 2,5% at least – if there is full convergence, 7%”, she told.

Bregu announced that RCC is active in discussion over the demographic situation, recognized it as a key challenge a long time ago, engaging stakeholders, advising on how to improve the economic situation because they see that as one way forward.

“By Sofia Summit on November, 10 we will have a very good action plan on the Common Regional Market. The region will still have those neuralgic problems even after the pandemic. On the other side, there is the necessity to stay together and firm in helping WB to come out and recover from a pandemic. EU offered 3,3 bn euro and governments acted”, Bregu assessed.

Robert de Groot, Permanent Representative of the Netherlands to the European Union in Brussels, told that the EU and the Netherlands are strict, fair and engaged in enlargement process of the Western Balkans.

“The revised methodology is meant to speed up the process, this is a sincere way of making things faster. Cutting corners at this stage of a long process would not do anyone any good”, he said.

According to Groot, it is always clear in the Western Balkans that the EU and the member states are the biggest investors, the biggest trading partner and the biggest donor, but EU should do better in communications.

“We promised integration to Euro-Atlantic structures. This promise stands and we will stick to it”, he concluded.

Tomáš Petříček, Minister of Foreign Affairs of the Czech Republic stressed that the EU needs to start a discussion with Western Balkans countries on alignment with the EU’s foreign policy and its positions.

“We see that external actors are increasingly active in the Western Balkans region. At the same time, I believe that the EU is in a good position and should use the momentum in March and October to reopen some discussions with the governments in the region. I don’t see the situation as dramatic, yes we see foreign actors, but we as the EU are in a position to increase momentum”, he said.

He pointed out the importance of the process of the normalization of relations between Serbia and Kosovo.

“Difficulties in bilateral relations need to be overcome for the benefit of generations to come. I often mention the example of Czechs and Germans, who were able to do that not by one memorandum, but by continuous engagement and collaboration”, Petříček said.

Susanne Schütz, Director for South-East Europe, Turkey and EFTA States of the German Federal Foreign Office underlined the importance of the Berlin process.

“We still believe that the Berlin Process has a very important role to play alongside EU accession process”, she said.

She said that the EU expects from new Serbian government to take decisive action, aware of the latest Progress Report, paying special attention to chapters 23, 24, 31 and 35.

Schütz emphasized that Germany hopes to finalize and open the negotiations with North Macedonia and Albania.

“Our main concern for the moment is the negotiating framework with North Macedonia, we hope to finalize it so we can open the negotiations. As for Albania, there are still some conditions and we are hopeful these will be met by the end of our Presidency”, she concluded.

Hoti: If there is no agreement, we will restore full reciprocity towards Serbia