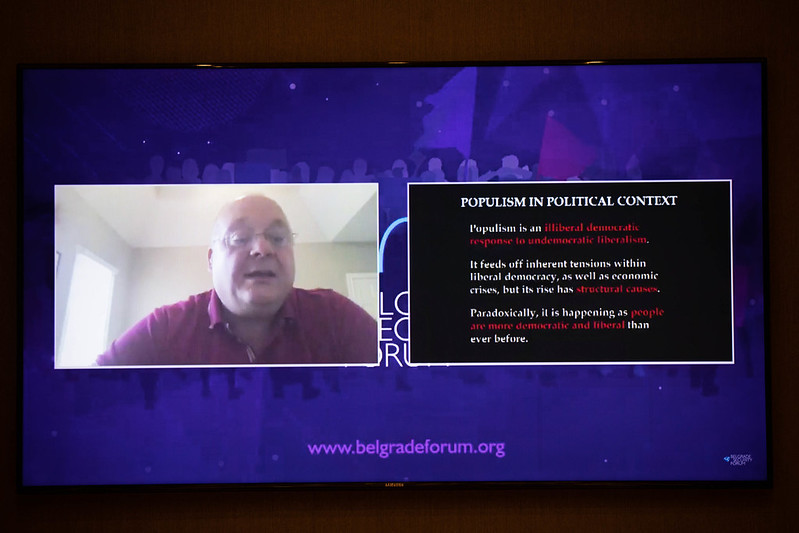 BELGRADE – Populism did not start with Trump, and it will not die with Trump either, said Cas Mudde, Stanley Wade Shelton UGAF Professor (School of Public and International Affairs SPIA at the University of Georgia, USA), at the beginning of his presentation entitled “Populism in the 2020s: Beyond the populist Zeitgeist”, during the fifth day of the 2020 Belgrade Security Forum (BSF).

Populism, as Mudde defines it, is a thin-centred ideology that considers society to be ultimately separated into two homogeneous and antagonistic groups, ‘the pure people’ and ‘the corrupt elite’.

“Populist actors can be left or right, depending on their ‘host ideology”, Mudde said, explaining that, for instance, Syriza in Greece is a left populist party, which combines its populism with the host ideology of socialism.

Mudde argued in 2004 that the Western Europe lived in a “populist Zeitgeist”, meaning that populism had become normalised.

“Central aspects of populism, for example the idea that elites are corrupt, have become mainstream by politicians and media”, he added.

Analysing the state of contemporary politics and ruling parties around the world, Mudde said that in Europe today we can find primarily right-wing populism, and particularly radical right populism.

“Populism feeds off inherent tensions within liberal democracy, as well as economic crisis, but its rise has structural causes”, Mudde said.

According to Mudde, the upcoming US elections are not important just for the United States, but also for global politics. He said that the American electorate has a choice between a clear right-wing populist, and someone who stands for the old liberal democratic consensus.

“If Trump wins, what we will continue to have is a tacit support for populists around the world, and normalisation of the far-right. If Biden comes to power, because of the struggle in the US between liberal democracy versus right-wing populism, he will take that struggle abroad, and stand up to Orban in Hungary, to PiS in Poland, and to Bolsonaro”, he claims.

Answering the question of how to defeat populism, Mudde said that populism is not the main problem, but that it is the main symptom of liberal democracies.

“Where liberal democracy functions well, populism overall will not be that successful. The real question is how can we strengthen liberal democracy”, he said, adding that it is important to encourage inter-ideological debates and conversations on various important topics, such as healthcare and education, in order to prevent further political polarisation of societies.