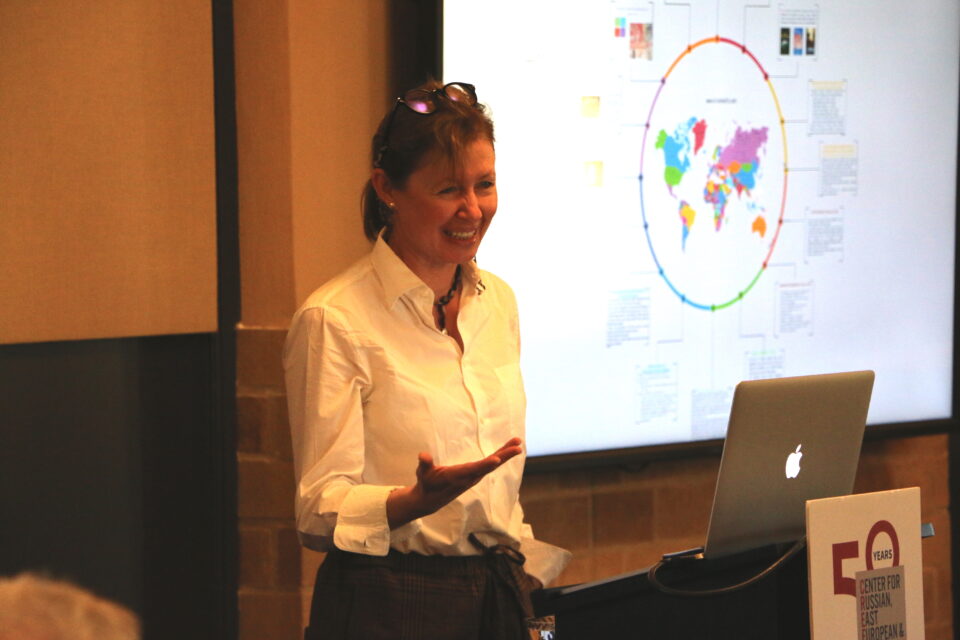 Informal practices which play significant roles in governance all around the globe are unwritten rules that people use to “get things done” and acquire goods and services more efficiently by circumventing written rules. These practices underpin corruption in the societies with weak rule of law systems, but they exist in prosperous countries as well. What is the correlation between informal practices and corruption, how to recognize informalization of governance and create policies to address these issues are some of the topics we have discussed with Alena Ledeneva, Professor of Politics and Society at the School of Slavonic and East European Studies of University College London in the United Kingdom.

Professor Ledeneva is known for the first Global Encyclopaedia of Informality (UCL Press, 2018) and is currently leading the Global Informality Project, she is also a founder and editor of FRINDGE Centre. She was also the keynote speaker on the Belgrade Security Forum which took place in October 2020.

European Western Balkans: The informal practices, such as “veza”, “kumstvo”, “švercovanje”, “јак играч”, „štela“, „rad na crno“ are part of everyday life in the societies of the Western Balkans. What are the main drivers of these practices and are they culturally or institutionally conditioned?

Alena Ledeneva: I would say it is both. In best academic literature that we have, we understand that the institutions have been shaped by formal constraints which are codified sets of rules and informal constraints which are shaped by tradition, customs, habitual behaviour. We are squeezed in the circle by both types of constraints. In societies where formal rules are legitimate it is much less needed to rely on informal ways of getting things done, because things could get done effectively and presumably cheaply through formal channels.

However, if formal institutions fail to serve, people very often rely on informal channels or networks. There is a very interesting phenomenon that if we get used to relying on our friends, relations and personal network, the emergence of the habit happens, which is very difficult to transform. This happens because the habit becomes part of our culture, so triggers (or “nudge pulses” how they are called in the West) have to be created in order to change the behaviour, meaning that the people have to be nudged to try formal channels.

EWB: In Western Balkans societies there is common thinking that corruption is “part of our DNA” and that we cannot get rid of it. What is your opinion on that?

AL: The same thing was told about Georgia and then they became the champions of anti-corruption and actually managed to get rid of petty corruption and administrative corruption very effectively just with the means of the personal will of the President and sudden transformation of key institutions such police and judiciary.

Basically, what Mikhail Saakashvili has done in terms of reforms is that he has sacked everyone who were carriers of the “old culture” and hired new people who were given enough state support to operate on the basis of formal reward systems rather than informal loyalties and conformity. He launched the “cultural campaign” of what means to be “modern Georgian” with the main message that “old culture” is against modernity.

This was an interesting combination of change of both formal and informal constraints. He changed formal rules but also the informal constraints and replaced them with being “modern Georgian” as fashionable which worked. In this case of petty and administrative mid-level corruption has gone but what remained is Georgian hospitality which was worrying because those kinds of settings are social glue where informal obligations and agreements take place.

Arguably, this has nothing to do with the Balkans but with the nature of political power where absolute power corrupts absolutely, and the inner corruption of the political machine is known world-wide. Informal governance operates more efficiently in Russia and Serbia because we have limits in the checks and balances against those political machines. Our media does not work as a watchdog, our civil society seems to be co-opted so the informal governance is being very effective.

EWB: Informality of governance that you have mentioned is very much represented in the Western Balkans. You have developed the concept of “3C” which explains this phenomenon quite successfully. Can you tell us more about it?

AL: The “3C” formula is the easiest way to explain informal governance. The “3C” stands for co-optation + control + camouflage, which are all elements that take place informally and invisibly. Co-optation means to co-opt opposition and members of power elite in order to support the ruler. This is done by various methods and tricks, including by creation of information leverage by using of the comprising files. The security services are used to create those files, so once you have information leverage people could be co-opted and work with you. The people could be also rewarded by giving them industries to run, business to benefit from and there are a lot of other examples researched in the Global Informality Project.

To control the situation means to monitor key people in your economy, for example in 2012 in Russia special security forces department was created to monitor political funding or any affiliation with politics by top 100 earners in Russia. The funny thing is that even security services might not be necessary, because if you divide your elites, you could rule by them exercising mutual vigilance. This is the so-called “neighbourhood watch” where people would actually denounce and report on each other to keep the ruler informed.

AL: In the literature, informality is very often stigmatized. It is associated with underdevelopment, corruption and pre-modern ways of running economies and politics, basically with the global south. In the Global Informality Project what I saw as a fascinating question to tackle is whether the premise “Let’s get rid of informality and we are going to have good governance” actually makes sense.

What we have discovered is that the better societies in terms of governance, like Scandinavian societies, who are on the top level of happiness and business environment, seems to have very important informal constraints than underpins those governance models. This was counter-intuitive because you would think, why do they need informality when their formal institutions work? That is how we discovered the practice of Janteloven, meaning that the people are supposed to be equal within their own community and everyone should be like everyone else.

A good anecdotal example of this is when they sat up the Rolls-Royce garage sales in Denmark in a year shop had to close, because no one dares to engage in conspicuous consumption, as this was not part of the informal workings of this society.

AL: Within the big anti-corruption projects ANTICORP and INFORM funded by the European Commission which aimed to close the gap between formal and informal institutions within the Western Balkans, we have discovered that majority of policies only consider formal means of change, such as harmonization of legislation with the European Union.

What was left beyond the consideration are informal constraints or policies that could actually help to transform informal constraints. The example of “being modern Georgian” is one of those things, so someone needs to decide what it means to be, for example, the “modern Serb” and promote that Agenda very powerfully.

This is the top-down effort that tries to transform the bottom-up pressure on people to engage in informal networks that are considered to be corrupt, unfair and on the expense of public good. Also, two more approaches could be used such as the creation of alternative channels for things which are done informally, for example, employment by the open and transparent system (like a points system in China) and the context-sensitive politics which means using the data on informality when designing the formal changes.