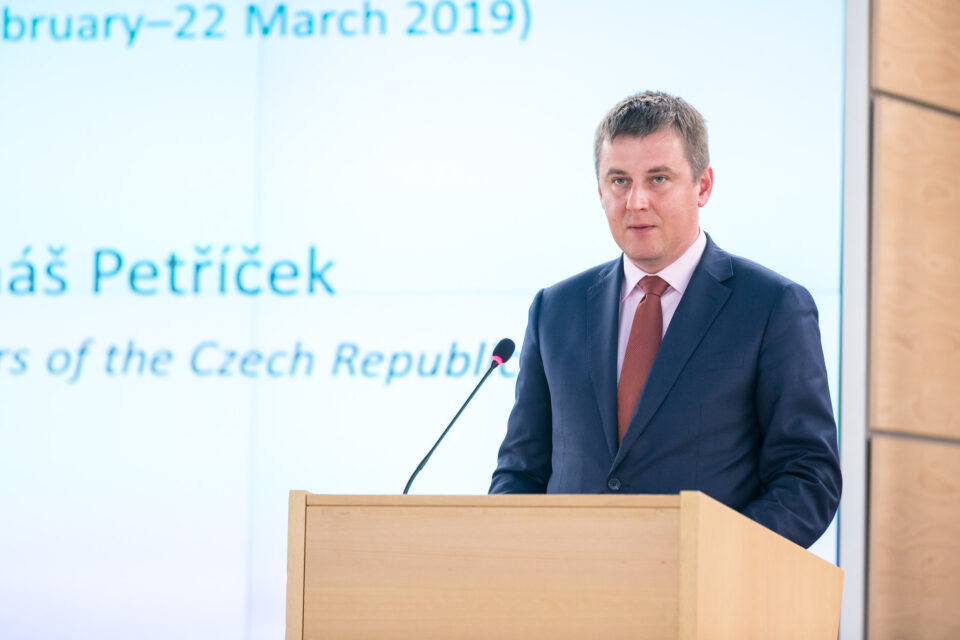 Will enlargement be one of the priorities of the Czech Presidency over the Council of the EU, what could be the lessons from the Visegrad Group for the Western Balkans and is there currently political will among EU member states for enlargement?

These were some of the questions EWB has asked Tomáš Petříček, Czech Minister of Foreign Affairs. Petriček was a speaker on the 10th Belgrade Security Forum “No Trust, No Peace” which took place during October.

European Western Balkans: Czechia is considered to be one of the strongest supporters of enlargement in the EU. What do you see as the main reasons why the EU should include new members from the Western Balkans? Is this an important issue for Czechia?

Tomáš Petříček: EU enlargement is a long-term priority of Czech foreign policy. Following the tragic wars in the 1990s, we are deeply aware of the importance of the Western Balkans for the overall stability and security of Europe. We should not forget that the EU is essentially a peace project. The integration with other European nations is the best way to achieve lasting peace and stability in this part of the world.

EU enlargement is a long-term priority of Czech foreign policy

The Western Balkans is a region geographically very close to us and we have traditionally excellent bilateral relations and extensive cooperation with individual countries. Therefore, we feel very strongly about the need to bring all the Western Balkan countries into the EU family.

EWB: There was a lot of discussion about the lack of political will for enlargement in the EU, especially last October when Albania and North Macedonia did not get the green light for opening accession negotiations. Do you believe there is now a consensus among member states regarding enlargement?

TP: I agree that EU enlargement received less attention in 2018 and 2019 due to numerous factors that are not always related to the region itself. Nevertheless, the EU member states understand the value of the EU enlargement process and the need to ensure its credibility. This understanding led to a positive decision on the start of accession talks with North Macedonia and Albania in March 2020.

The newly created momentum was confirmed at the virtual EU-Western Balkans summit organized by the Croatian EU Presidency and through the release of the 2020 enlargement package and the comprehensive Economic and Investment Plan for the Western Balkans on October 6. Currently, we all look forward to holding the first intergovernmental conferences with North Macedonia and Albania that are the factual start of EU membership negotiations.

EWB: Do you believe that the new enlargement methodology, adopted this March, could improve the process of accession negotiations and the Western Balkans’ EU perspective? Or it was simply a matter of appeasing France and other countries which objected to moving forward with enlargement?

TP: The methodology used for Serbia and Montenegro to conduct their negotiations had already had many of the elements of the enhanced methodology as proposed by the Commission at the beginning of 2020. The main ones focus on the fundamental issues of the rule of law and on EU values in general.

The enhanced methodology articulates the link between the pace of accession and the rule of law reforms more clearly and at the same time adds some welcome elements of predictability and dynamism, such as regular intergovernmental conferences that will add political steer, clusters of chapters to be opened in bulk, timeframes for next steps, etc.

The final detailed shape of the methodology is planned to be approved by the Council in November. We support this intention as it will lay down the foundation for holding the first intergovernmental conferences with North Macedonia and Albania by the end of the German EU Presidency.

EWB: Czechia will hold presidency over the European Council in the second half of 2022. What do you expect to be the Czech priorities during the presidency, and do you believe EU enlargement in the Western Balkans will be one of them?

TP: The priorities of the Czech Presidency of the EU Council are now in the stage of preparation. In general, we will focus our efforts to promote a prosperous, modern, clean and safe EU that uses fully the potential of its internal market; an EU that is coherent, sustainable, innovative, and plays its role in the world with an emphasis on its neighborhood. We will certainly have to reflect on the current COVID-19 crisis and the continuing post-pandemic renewal in the EU.

As for EU enlargement, it will definitely be one of the priorities of the Czech EU Presidency. If the conditions are right, we intend to organize an EU-Western Balkans summit that will underscore the attention we all give to the process of integrating the Western Balkan countries into the EU as well as to mutual cooperation.

EWB: Do you believe that the Visegrad Group format of cooperation could be a role model for the Western Balkans, perhaps through the announced mini-Schengen initiative?

TP: I am pleased to say that the Visegrad Group cooperation has been recognized by leaders in the Western Balkans as a very suitable model of regional cooperation that facilitates reconciliation, the establishment of good neighborly relations, and integration into the EU.

Another example of cooperation between the two regions are the traditional annual meetings of the ministers of foreign affairs of the V4 and the WB6 that focus on EU enlargement and regional cooperation. It was my pleasure to host the last meeting in Prague in February.

EWB: It is often pointed out that the Visegrad format allows smaller member states to have a stronger voice and more impact within the EU. Having in mind the position on enlargement of the four countries, do you see the Visegrad group playing a role of advocates for enlargement in the Western Balkans?

TP: It is clear that regional cooperation helps the countries involved better integrate into the EU. It is also true that once inside the EU, the smaller-sized countries do benefit from having established strong cooperation. In our case, the V4 has helped us promote our interests more effectively while at the same time it continued to remind us of the importance and value of regional cooperation even after becoming EU members.

The V4 countries have traditionally been very vocal supporters of EU enlargement and I can assure you that my V4 colleagues and I will continue explaining to our partners the benefits of bringing the Western Balkan countries into the EU.

EWB: What is the status of the Conference on the Future of Europe? It seems that the COVID-19 pandemic has completely side-lined this topic. Do you believe there will be a way to include Western Balkan countries in this process?

TP: The launch of the Conference on the Future of Europe had to be postponed due to the COVID-19 pandemic. However, this does not mean at all that the Conference will not take place, as a broad and inclusive discussion about our common future is indispensable, all the more in the wake of the pandemic.

In fact, the interinstitutional negotiations between the Council, the European Parliament and the European Commission take place these days with the aim to agree on the scope and organizational aspects of the exercise. When all these aspects are clarified and as soon as the pandemic situation allows, the Conference on the Future of Europe can start.

In line with the Czech foreign policy priorities, the Western Balkans countries constitute an essential part of Europe and I am therefore convinced they should be included in the discussions about its future. Once the agreement between the institutions is reached, the way of their potential involvement will become clear.