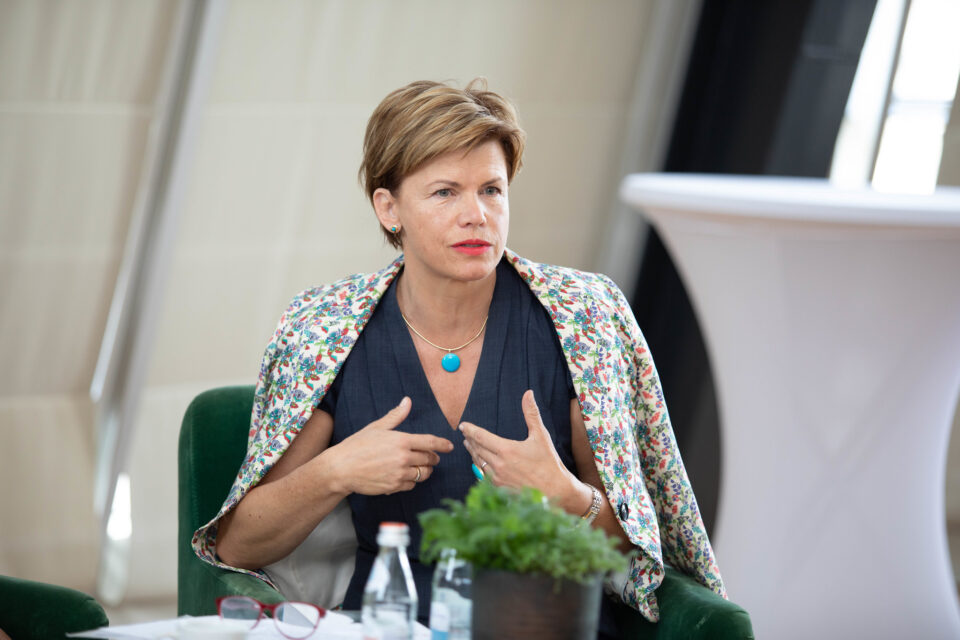 We interviewed Baiba Braže, NATO Assistant Secretary General for Public Diplomacy, about the challenges that the COVID-19 pandemic poses to the Alliance, fake news and disinformation, cooperation with Serbia, Bosnia and Herzegovina and Kosovo, as well as the security of the Western Balkans.

European Western Balkans: The COVID-19 pandemic is undoubtedly the biggest challenge the world faces today. What do you see as the main security implications of the pandemic and what does NATO do to address them?

Baiba Braže: NATO’s core task is to continue delivering credible and effective deterrence and defence to our countries and populations. We have taken all the necessary measures to ensure that NATO remains ready, vigilant and prepared to respond to any threat because it is essential that this health crisis does not become a security crisis.

The COVID-19 pandemic is an unprecedented challenge to our nations and continues to have a profound impact on our people and our economies. We stand in full solidarity with all those affected by the crisis, and we are deeply grateful to all those on the front line.

NATO and Allied militaries continue playing a key role in supporting the civilian response to COVID-19, strengthening our societies’ capacity to be resilient. Solidarity and resilience are the principles of NATO’s response in fighting the pandemic.

Albania, Montenegro and North Macedonia received dozens of ventilators and around 1,5 million EUR in medical supplies

Allies with more than 350 flights delivered hundreds of tons of critical supplies to other Allies and partners around the world. Across the Alliance, almost half a million troops supported the civilian response, constructing almost 100 field hospitals, securing borders and helping with testing. In June, we agreed on a new operations plan – Operation Allied Hand – to ensure we remain ready to help both Allies and partners. We established a trust fund for the purchase of urgently needed items and we are establishing a stockpile of medical supplies. This will help ensure that critical assistance gets to the right place at the right time. We have received offers of medical equipment and funding. This includes ventilators from the United States and Hungary, protective equipment from Germany as well as financial support in the millions of Euros from several NATO Allies.

Between the end of October and the beginning of November, our Allies Albania, Montenegro and North Macedonia received dozens of ventilators and around 1,5 million EUR in medical supplies from the stockpile. Some financial support is earmarked to provide relief to our hardest-hit partners, including the Republic of Moldova and Tunisia. Further assistance is being considered for Bosnia and Herzegovina, Iraq and Ukraine.

EWB: In recent months, due to the COVID-19 crisis, there has been a real explosion of false news or misinformation throughout Europe, which can have very negative implications for stability and security. Has NATO undertaken any actions to address this problem?

BB: Countering disinformation and propaganda is nothing new for NATO and also currently is high on the Alliance’s agenda. It is important that we work together with Allies, partners, civil society, academia, media to counter disinformation from state and non-state actors, who are trying to sow divisions and undermine our democracies.

Russia’s Foreign Ministry has suggested that the US is working with Georgia to create “dangerous diseases, including for military purposes”. Russian state-backed media have also claimed COVID-19 is bio-warfare, and that there is “no solidarity” between Allies. China’s Foreign Ministry suggested that US troops brought coronavirus to Wuhan, and state-backed media have promoted claims that COVID-19 originated in Italy. China’s embassy to France also posted an article claiming that local nursing home staff had abandoned their posts, leaving residents “to die of hunger and disease”. Iran’s Supreme Leader has even claimed the coronavirus was “specifically built for Iran”.

We are also seeing disinformation aimed at eroding trust in NATO troops. For example, in April a fake letter was sent in the Secretary General’s name claiming that NATO would withdraw its troops from Lithuania. We have also seen false stories about COVID-19 in NATO’s battlegroup in Latvia, and about US forces in Poland. This shows the importance of continued vigilance.

Of course, none of this is true. To all this, NATO has responded with facts, transparency and with an unprecedented display of Allied solidarity. That, I think, is one of the best antidotes to disinformation.

EWB: North Macedonia joined NATO in March 2020 and became its 30th member state. How do you think this contributed to the security of the Western Balkans and NATO’s strategic goals?

BB: North Macedonia’s accession to NATO this year is the result of many years of solid and mutually beneficial cooperation – coupled with determination and commitment to reform by North Macedonia’s authorities – which helped to strengthen the country’s security. The newly re-elected Prime Minister Zaev was recently at NATO Headquarters. This was an important opportunity to mark North Macedonia’s historical achievement. North Macedonia has joined as a sovereign country in a strong Alliance, with a seat at our table and an equal voice in shaping and making our decisions.

North Macedonia continues, as a full member, to be a valuable contributor to our cooperative security effort, in many different theatres. It has troops serving in Afghanistan under the NATO-led Resolute Support Mission to train, advise, and assist the Afghan security forces. It also participates in the collective efforts to support their financial sustainment by contributing to the NATO-run Afghan National Army Trust Fund. Furthermore, it has recently joined our peacekeeping mission in Kosovo.

Not long after its full accession, North Macedonia could experience what it means to be part of NATO by becoming one of the Allies needy of assistance as COVID-19 hit the country. The global pandemic clearly demonstrates that at times like these, friends and Allies are more important than ever. North Macedonia has not stood alone during the coronavirus crisis.

NATO’s Disaster Response Coordination Centre provided timely and coordinated assistance wherever effectively needed, therefore avoiding unnecessary duplications through the delivery of medical supplies and financial aid to ease the burden on the national healthcare system and to save lives. To this effect, at the end of October North Macedonia has received a COVID-19 assistance package from NATO’s new medical stockpile, which included 60 ventilators and other urgently needed equipment worth approximately 1.4 million euros. And this comes of course in addition to the aid and support Allies have already delivered to North Macedonia. As NATO Secretary-General, Jens Stoltenberg, eloquently put it: “This is NATO solidarity in action.”

EWB: Serbia adopted the second Individual Partnership Action Plan (IPAP) for the 2019-2021 period. How do you assess the implementation of this plan so far and did the COVID-19 pandemic had any negative effect?

BB: Serbia is a valued, respected and important partner. Our cooperation is reliable. It is mutually beneficial and articulated in a number of domains; and there are regular contacts at the highest level. In Belgrade, we have had a Military Liaison Office in place since 2006, with the aim of facilitating the NATO-Serbia partnership, and contributing to Serbia’s security needs.

Concretely, and at Serbia’s request, we undertake a range of activities designed to strengthen Serbia’s defence and security forces, structures and institutions, within the framework of the Partnership for Peace with NATO, signed by Serbia in 2006.

Overall, NATO and Serbia work together to be better prepared for civil emergencies such as floods and forest fires. We are also helping Serbia reform its security forces and institutions. NATO trains Serbian soldiers for international peace-keeping missions; and in the past 20 years, we have invested millions of euros to help Serbia to destroy over 230 tons of obsolete ammunition. NATO–Serbia established a mutually beneficial partnership.

Some examples: they work together to assist other countries, for example by training Iraqi military medics. Furthermore, since 2006, Serbia has contributed to more than 30 activities under NATO’s Science for Peace and Security Programme. These have included energy and environmental security, defence against chemical/biological/radiological/nuclear agents, counter-terrorism, cyber-defence, and human security. Also, several NATO Allies and partners – including for instance, Austria, the Czech Republic and Turkey – have provided critical medical aid to Serbia, in response to the COVID-19 pandemic.

EWB: Serbia recently canceled all military exercises it had with other countries. What kind of effect will this have on the Serbia-NATO partnership?

BB: NATO has a long-standing partnership with Serbia, which we value. We have no specific events planned with Serbia for the coming months, but we remain committed to the partnership in the interest of stability and security in the region.

EWB: Exactly two years ago, the Kosovo Assembly approved to transform the Kosovo Security Force into the Kosovo Armed Forces within ten years. This move was endorsed by Alliance members such as Germany, United Kingdom, France and the United States, while Secretary-General Jens Stoltenberg said that he regrets the decision. He later said that the Alliance will consider the level of cooperation with KSF. What is the stance of NATO on the KSF issue?

BB: The NATO Secretary-General has made clear since December 2018 that this move was ill-timed and that the decision was made against his advice. NATO continues to support the development of the Kosovo Security Force under its current mandate. With the change of mandate, the North Atlantic Council is re-examining the level of NATO’s engagement with the Kosovo Security Force. Discussions amongst Allies to this effect are ongoing.

We remain fully committed to security in Kosovo through the daily activities of our KFOR mission – which is mandated under the provisions of United Nations Security Council Resolution 1244 of 1999 to provide a safe and secure environment and freedom of movement for all communities in Kosovo.

NATO also supports the EU-facilitated dialogue between Belgrade and Pristina. As pointed out on several occasions by Secretary General Stoltenberg, both Belgrade and Pristina should ensure that no tensions arise in the region, that they should refrain from statements or actions, which may lead to escalation, and that they should remain focused on progress with reforms and on political dialogue, which remains the only viable way to a long-lasting solution.

EWB: Last year, Bosnia and Herzegovina presented the so-called “Reform program” which does not prejudice NATO membership. In the interview for our portal Admiral James Foggo, commander of Allied Joint Force Command in Naples called this a “progress” and “small victory”, considering the negative stance of Serbs. How do you view Bosnia and Herzegovina’s NATO perspective?

BB: NATO’s cooperation with Bosnia and Herzegovina is extensive. The Alliance maintains a presence in Bosnia and Herzegovina through the NATO Headquarters Sarajevo, which performs a range of tasks, including support to reforms and capacity building within the BiH defence and security forces, structures and institutions, under the umbrella of NATO’s Partnership for Peace.

We remain in regular contact with the BiH authorities. We look forward to our continued cooperation on the reform of the BiH security forces and structures and BiH contributions to our Euro-Atlantic security, including within the framework of the NATO-led Resolute Support Mission in Afghanistan.

Which events and developments are expected in 2019?