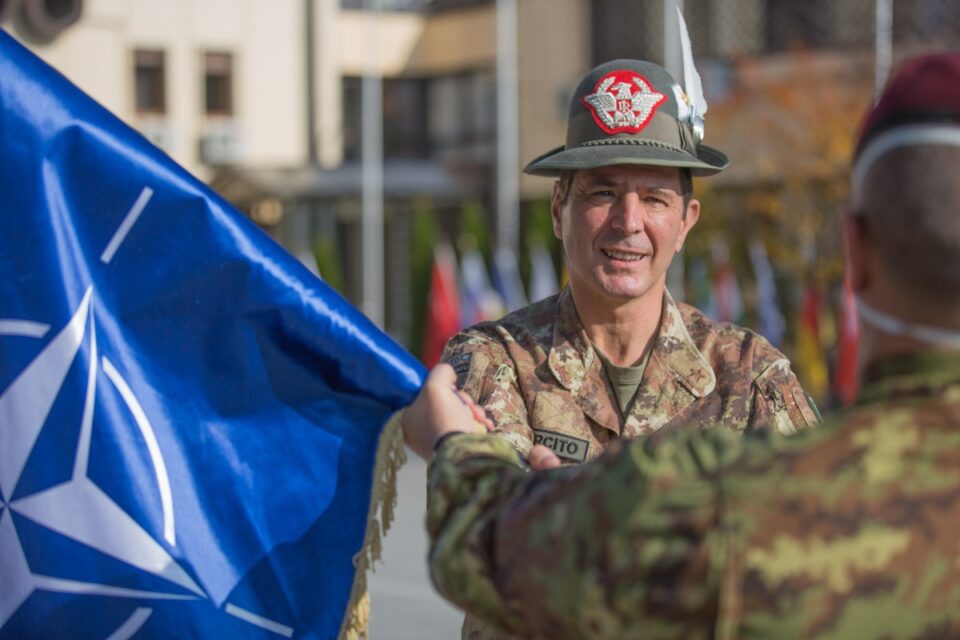 General Risi greeted his successor and thanked his 3,500 soldiers and all KFOR’s partners that contributed to the mission’s achievements.

“As I reflect on the last 12 months, I recall with clarity my words on 19 November 2019, when I accepted the honour, privilege, and responsibility as the XXIV Commander of the NATO-led KFOR mission. I chose our ‘Enduring Stability’ motto to exemplify our commitment to the mission and to continued security and stability in Kosovo and throughout the region, no matter which challenges would lay ahead“, said Risi.

Risi added that since the outbreak of the COVID-19 pandemic, KFOR regularly contributed with its units to a safe and secure environment and freedom of movement for all citizens in Kosovo, whilst adopting all preventive measures recommended by the World Health Organization, to protect its soldiers and the communities they serve.

KFOR also contributed to the local response to COVID-19 through the donation of personal protection equipment to the health institutions in Kosovo and by facilitating the delivery of aid by NATO members and partners, for the benefit of all communities in Kosovo and through a number of projects, including in the field of education.

During General Risi’s tenure, KFOR strengthened its cooperation with the Institutions in Kosovo, the International Community and all security organizations to fulfil the mandate established by United Nations Security Council Resolution 1244 of 1999. At the same time, the NATO-led mission contributed to foster inter-ethnic coexistence and to developing the security framework for dialogue, states KFOR.

In this regard, General Risi highlighted his supportive security role in the arrangement facilitated by the Ambassador of Italy to Kosovo Nicola Orlando, aimed at boosting inter-community relations through the protection of religious cultural heritage and bolstering the economic development within the municipality of Dečane and the region.

“I couldn’t be more proud of the enduring work of KFOR. Today, Kosovo is safer and more stable than when our mission began. I want to thank each of you for that remarkable achievement. This is a team effort and your hard work is paying off”, stated Admiral Burke in his address, before wishing the new Commander all the best for his forthcoming tenure.

Major General Federici expressed his pride to serve as the 25th Commander of KFOR and delivered his first statement:

“I place a very high value on teamwork and cohesiveness and will emphasize that a common vision and unity of effort is essential to our mission success, not only within KFOR but also with other International Organizations and with the Institutions in Kosovo. This is the driving force behind our motto of the Kosovo Force XXV: ‘As One We Progress’. With a common vision, we will provide a synergistic effort for KFOR and the Institutions in Kosovo”, said Federici.

Macedonia: The protocol for NATO membership will be signed in January 2019