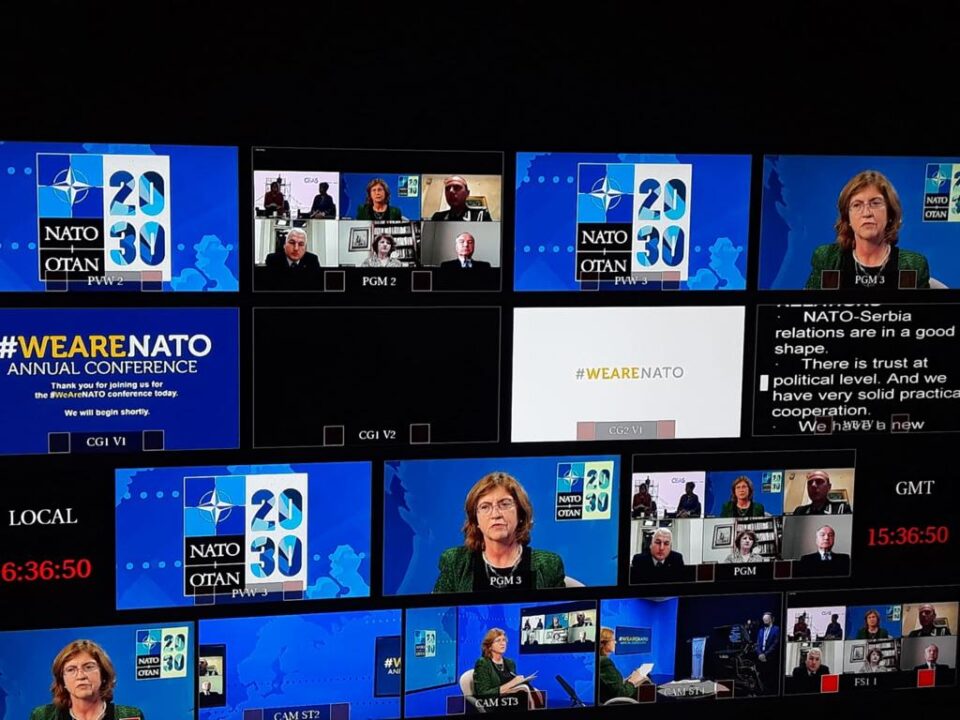 BELGRADE – Serbia should put aside its emotions and focus on the benefits that partnership with NATO offers, it was said during the panel “Serbia and NATO – New government(s), new trends?” organised as part of the 8th Belgrade NATO Week by the Centre for Euro-Atlantic Studies (CEAS).

NATO Deputy Assistant to the Secretary General for Public Diplomacy Carmen Romero said that NATO worked closely with Serbian institutions to ensure the dialogue with civil society organisations, in order to increase public knowledge on the role of NATO around the world.

“NATO has responded in two ways to COVID-19. First protecting our forces to remain ready to deal with any security threats, and by making sure that this health crisis does not become a security crisis. And second, by showing strong solidarity supporting civilian efforts. Individual NATO allies have provided critical medical assistance to Serbia and also to other countries in the Western Balkans” said Romero.

Saša Kostić, Minister-Adviser of the Department for NATO and Partnership for Peace at the Ministry of Foreign Affairs of Serbia, said that peace, stability and economic prosperity of the region are the primary interests of Serbia and that working on connecting the region is a priority because it will lead to strengthening the stability and growth of the region.

“Relations with NATO established through the Partnership for Peace program are an important area of foreign and security policy for Serbia. The continuous meetings between the President of Serbia, Aleksandar Vučić, and the Secretary General of NATO, Jens Stoltenberg, especially contribute to the improvement of the political dialogue between Serbia and NATO”, said Kostić.

He added that NATO is still perceived as the aggressor among Serbian citizens and that Serbia and NATO have to work on restoring the trust in one another.

“We have different views on the event that is commonly called “NATO aggression” that happened more than 20 years ago. However, both sides have the responsibility to do whatever it takes to restore the partnership and to provide permanent security of the region”, emphasized Kostić.

A similar opinion has the Deputy Chairman of the Committee on Foreign Affairs of the National Assembly of the Republic of Serbia Vesna Marković, who argued that, despite the many positive projects that Serbia and NATO have worked on in the past, most of Serbian citizens have extremely negative sentiments about NATO.

“We should leave aside our emotions and focus on the benefits that partnership with NATO offers. Apart from that, the Washington Agreement is an important new step in the relations between Serbia and USA. America has shown that it sees Serbia as a credible partner, but for us, the Agreement is important for developing the economic cooperation of the countries in the region”, said Marković.

Suzana Grubješić, Director of the Centre for Strategic Analysis and Prognosis, thinks that the politics of military neutrality can be an obstacle on Serbia’s EU accession path, but that it is not impossible that Serbia’s status as a militarily neutral country gets accepted by some EU members.

“Our military neutrality was declared in 2007, and in 2019 it was confirmed through two strategic documents – National Security Strategy and the Defence Strategy. One of the novelties that these documents brought is the defence of the interest of national security through the process of European integration. The European Union might influence the change of the doctrine of neutrality of its individual members, but does not change the whole concept of neutrality”, said Grubješić.

The 8th Belgrade NATO Week is organised by the Center for Euro-Atlantic Studies and supported by NATO Public Diplomacy Division, Balkan Trust for Democracy, Norwegian, US and Czech Embassies in Belgrade.