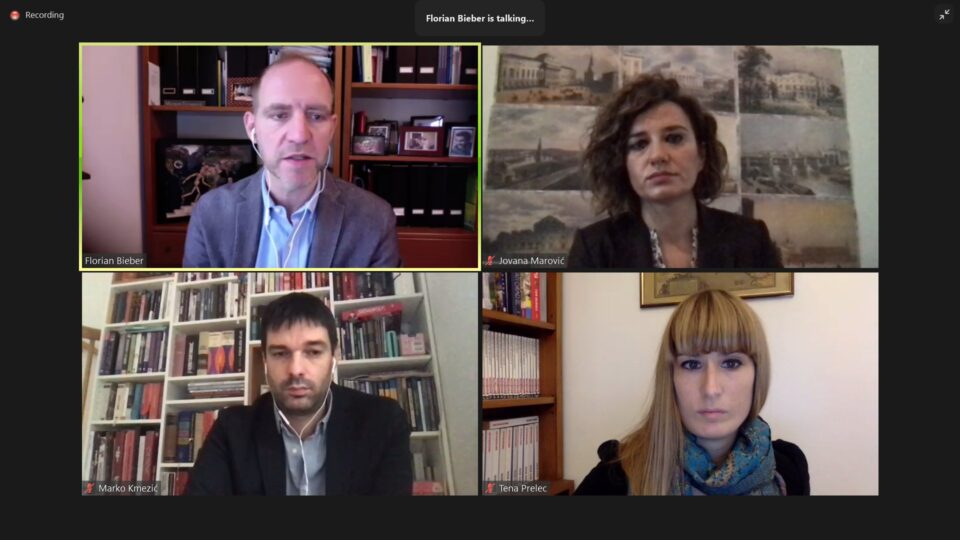 "The Western Balkans on their path to the EU" conference; Photo: Twitter / EFB

WESTERN BALKANS – The Western Balkans is the courtyard of the EU, it’s not about enlargement, but about completion, it was concluded during the conference “The Western Balkans on their path to the EU: Challenges and Opportunities for the European Integration of the Western Balkans”, organized by the Danish Foreign Policy Society, Balkans in Europe Policy Advisory Group (BiEPAG) and European Fund for the Balkans.

“Critics of enlargement play on the fear of enlargement, but the process can strengthen institutions and change society for the better,” said Aleksandra Tomanić, Executive Director of the European Fund for Balkans (EFB).

Tomanić added that if we do not see major changes in December, we can say that EU enlargement is dead.

Charlotte Flindt Pedersen, Director of The Danish Foreign Policy Society, said during her welcome remarks that it is time to talk about the Western Balkans and see how it will be engaged in the future regarding its EU perspective.

Even though there are many arguments for the Western Balkans’ accession to the EU, the fight for democracy and rule of law does not stop when the country joins the EU, said Nikola Dimitrov, Deputy Prime Minister for European Integration of North Macedonia.

“When you use the adjective European in the Western Balkans it means – normality, rules, free media, fight against corruption, clean air and waters, good economy”, Dimitrov told.

Speaking about the Bulgarian veto on opening accession talks with North Macedonia, Dimitrov said that the language cannot be an obstacle for joining the EU.

“It is difficult to explain why the Macedonian language is an obstacle to bringing North Macedonia closer to the Union because the EU respects cultural and linguistic diversity. History and language are not subject to debate between politicians. We will not give up, we are still talking, but language cannot be an obstacle if our partnership is honest. We are investing in our friendship with Bulgaria”, Dimitrov stated.

“Rule of law and captured states: Does the EU have what it takes?”

Rule of law is a question of democracy, not technicality, but there should be better tools to deal with it since the conditionality of the EU is not enough, it was concluded during the first panel entitled “Rule of law and captured states: Does the EU have what it takes?”.

Jovana Marović from Politikon Network and a BiEPAG member, emphasized that the rule of law is one of the main obstacles in establishing full democracy in the Western Balkans, adding that the conditionality of the EU in this field is not enough.

“As a result of all obstacles and challenges in the field of rule of law, there has been an erosion of trust in the institutions and the process of EU integration. The European Union should do more in that regard”, Marović said.

She explained that the Western Balkans countries need a specific approach and timelines, which means more commitment from the EU to not fitting all Western Balkan countries in the same framework.

Marko Kmezić from Centre for Southeast European Studies and BiEPAG member, said that the respect of the rule of law has been spelt as one of the main conditions of the Western Balkans EU enlargement process.

“The new approach to Chapters 23 and 24 relies on the benchmark system and the EU should develop concrete EU benchmark in the rule of law area”, Kmezić said.

He added that there should be a bottom-up approach and the civil society should be empowered to contribute more.

Tena Prelec from the University of Oxford and a BiEPAG member said that the latest surveys show that the trust of the citizens in election boycotts is extremely low in the Western Balkans, but the trust in change through elections is rising.

She assessed that this shows that people do believe in change, adding that Western Balkans leaders have learned how to keep political dominance.

There is energy among activists in the Western Balkans to make democratic changes, but the European Union should call out undemocratic practices and focus on concrete issues that impact the everyday lives of the citizens, it was concluded during the second panel entitled “Demand for democracy”.

Jelena Vasiljević from the Institute for Philosophy and Social Theory and a member of BiEPAG said that when we talk about demands for democracy coming from citizens and how they articulate this demand, we have a rather confusing situation in the region.

“There are many protests going on and people are clearly frustrated and dissatisfied with the situation with the state of their democracies. But we cannot really say that we are witnessing a major wave of citizens’ demands for democracy articulated in such a way”, said Vasiljević.

When it comes to Serbia, she pointed out that the citizens of Serbia feel disenchanted with politics and disappointed in politics and politicians.

“They feel betrayed by their institutions, but also by the EU and other international actors. They don’t feel ready to participate in the democratic process and protests”, says Vasiljević, adding that it would be more helpful if the EU stopped giving support to autocratic tendencies and became more straightforward in condemning what is happening in the region rather than supporting civil society.

Dobrica Veselinović from the Don’t Let Belgrade D(r)own initiative pointed out that the initiative has a bottom-up approach, to bring to citizens the politics that influence their everyday life and from there to build upwards.

“I see this huge potential in citizens. There are these blooming civil society movements in Serbia and the region that are connected and we are cooperating. On the other hand, there is a very harsh response from the governments to that”, said Veselinović.

However, he added that on their side, there is a huge amount of hope and energy to fix the broken system and democracy in Serbia.

“We are very keen to work with other actors in the region because it is a kind of domino effect. We saw the recent changes in Montenegro and Bosnia and Herzegovina. Political elites are communicating and learning from each other, so we also must learn more from each other in the future”, Veselinović pointed out.

Luka Rakčević from the United Reform Action (URA) said that the changes that happened in Montenegro are very important for the citizens because this is the first time that the government in Montenegro changed through elections.

“I think we now have some clear path to make corrections that we need. Citizens really felt the power of their vote and the voting process. I think that we started that wave and I am hoping that that wave can reach the shores of other Balkan countries. I really think that this will be a start of a greater change for the whole region”, stressed Rakčević.

However, he explained that it is hard for you to be the corrective mechanism if the government does not want to correct anything.

Arianit Xhaferi from the Eco guerrilla movement based in North Macedonia explained how his organisation had to fight huge corporations and criminals who have political ties in order to fight for clean air in Tetovo.

“We managed to pressure the government to close the factory that polluted the region. It was not easy, but we managed to do it”, said Xhaferi, adding that a lot of personal interests were being touched by their activities.

Therefore, he added that Brussels should come up with very strict demands and guidelines that candidate countries should fulfill in order to become members of the EU, because “it is exhausting, especially for people like us, for activists, because we fight very hard to see changes happen”.

Citizens of Denmark and the EU need to understand better and be informed about the Western Balkans and the meaning of its countries’ accession for the future of the EU, it was concluded during the third panel entitled “The Danish Perspective”.

Christian Axboe Nielsen, Associate Professor of History at Aarhus University, emphasized that the Western Balkans region is a part of Europe, adding that citizens of this region want a European way of life.

„It is important that we know here in Denmark how frustrating it is for the Western Balkans citizens that our leaders do not criticize nationalist and hateful rhetoric done by some governments in the region“, Christian Nielsen said.

Michael Aastrup Jensen, Member of the Danish Parliament for the Liberal Party, assessed that the EU should open its door to Western Balkans and start the accession talks.

„If the EU is not ready to at least slightly open its door and start accession talks, Russia will step in. In that regard, I am ashamed of the EU“, he said.

Jensen stressed that the European Union should use all tools to make the region European, adding that the Bulgarian veto is unacceptable.

Morten Messerschmidt, Member of the Danish People’s Party, said that he is sceptical about enlargement in the Western Balkans.

“There is not necessarily a positive development economically and democratically by accepting new EU members”, he said.

According to Messerschmidt, many of Western Balkans countries, such as Albania, Serbia and North Macedonia, would be much more satisfied if the EU would be realistic and say “that’s not going to happen”.

Katarina Ammitzboell, Member of the Danish Parliament from the Conservative People’s Party, said that the EU needs to deliver what it has promised because opening the accession talks is a start of the process, not full membership in the EU.

„The rule of law is, fortunately, getting more attention from the Commission, but corruption has an enormous impact on the economic development of the region“, she said.

Ammitzboell mentioned that some EU countries have the same problems as the Western Balkans with the rule of law, adding that this is a very difficult time for the European Union.

She underlined that Denmark is a strong supporter of civil society and independent media in the Western Balkans.

„We look positively on the dialogue regarding the starting of the EU accession process with Albania and North Macedonia. Also, we need to support civil society in the Western Balkans, since it is clearly under pressure from the government in the region. We have CSO’s ambassadors who are in power to build strong and independent media and civil society representatives“, she concluded.

Florian Biber, from the University of Graz and BiEPAG coordinator, concluded the conference by stressing out that the rule of law is essential for the accession process.

He said that the Western Balkans is the courtyard of the EU, and it’s not about enlargement, but about completion.

According to Bieber, rule of law is a question of democracy, not technicality, but there should be better tools to deal with it since the conditionality of the EU is not enough.

“The rule of law is essential, accession means enshrining, institutionalizing and bringing enduring changes to the societies”, Bieber concluded.

#WesternBalkan countries have the lowest air quality ☁️ in #Europe, which is why the @Balkan_Fund is launching the… https://t.co/PwsfDDN7g6

Reply Retweet Favorite
[OPINION] #Montenegro wants 🇪🇺 values for its citizens, which we have demonstrated when in the aftermath of the par… https://t.co/1jExc4H0bh

Reply Retweet Favorite
As was the case with the information regarding the coronavirus itself, the beginning of vaccination in Serbia 🇷🇸 wa… https://t.co/88Q4n9Wlku

Reply Retweet Favorite
The current situation with migrants in #BiH 🇧🇦 is a consequence of the authorities’ intransigence but also of atroc… https://t.co/RpsjMymWg7