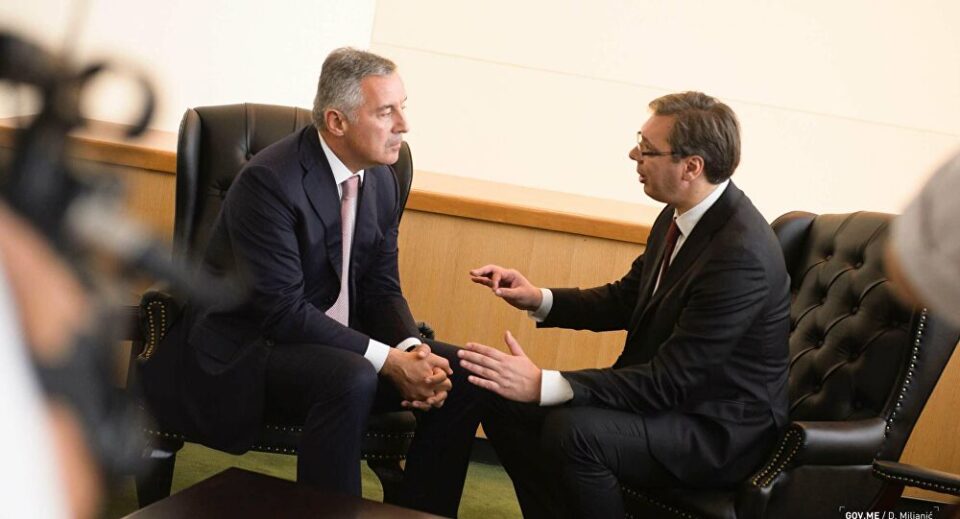 In autumn 2000, as a man on an excavator became the symbol of the revolt set to dig out the roots of Slobodan Milošević’s authoritarian regime, the ruling elite in Montenegro was just about to enter a new phase of consolidation. Then Montenegrin President Milo Đukanović had recently performed another of his multiple chameleon-like transformations. From Sloba’s ally and long-standing supporter of Yugoslav unity, Milo was about to set the course of a new era for his country: its independence. In doing so, he assumed the mantle of the champion of the Montenegrin nation, garnering support from both Western and Eastern allies.

Twenty years on, the chameleonic good fortune of Milo Đukanović seems to have run its course. An unlikely coalition of opponents, ranging from Serbian nationalists (backed by the powerful bishop Amfilohije, head of the Serbian Orthodox Church in Montenegro, who won this battle but later lost the one with COVID-19) to green civic parties, and passing through a range of in-between options, defeated Đukanović’s Democratic Party of Socialists (DPS) without resorting to blood-soaked revolutions. To the surprise of many (yours truly included), on 30 August 2020 democratic change in state-captured Montenegro took place through the ballot box. And a little more than three months later, on 4 December, the Montenegrin parliament approved its first-ever DPS-less government.

The change of a corrupt government is, of course, no guarantee that a new era of transparency and fuller democracy is to follow. The rise to power of Silvio Berlusconi in Italy (following the Tangentopoli scandal, which seemed to have wiped out the entrenched corruption of Italy’s ‘First Republic’) and that of Jair Bolsonaro in Brasil (after the Car Wash trials, hailed by some as a positive example of judicial activism) are but two recent examples. On the other hand, there are examples of countries where a ‘clean sheet’ did work out: Estonia is one of them.

This Baltic charm, alas, did not quite work in Serbia. The legacy of the two decades since 5 October 2000 is notoriously contested. During my PhD fieldwork, which sought to explain the morphing corruption practices in the energy sector in the post-Yugoslav space from the 1980s to the 2010s, I came across many examples of such disillusion with the new Serbian elite. I was particularly struck by the testimony of a former anti-Milošević activist, who said:

Turns out, manning an excavator in front of the parliament is not enough to uproot the dirt within it. The Serbia of 2000 and the Montenegro of 2020 differ in many respects, not only because of the time distance: while Milošević was soon handed over to the International Criminal Tribunal for the former Yugoslavia, Đukanović still wields considerable power as the President of Montenegro. However, parallels among the two ‘novel’ coalitions run aplenty. Similarly to the political forces about to take power in Montenegro, the Democratic Opposition of Serbia (DOS) was a broad church of progressive and conservative (some of them: nationalist) forces, united by the common aim to bring down a strongman. With time, their differences started to matter more, while corruption scandals engulfed the credibility of key members of the coalition.

If the 4 December experiment is to work, or for it to be a constructive interludium while conditions for fuller democratic pluralism are being built, it is essential that Montenegrins take note from their neighbours. There are several lessons that those interested in real change in Montenegro should heed – starting from the below.

A country whose state capture has been perfected over the course of three decades can’t be free of it immediately. Rather than overpromising and underdelivering, the new coalition would be better advised to underpromise and overdeliver. Easier said than done, for sure: but the message that a wholesome change in tack in a short time is an almost impossible feat needs to be articulated very clearly. Setting clear and achievable goals should be a priority.

2. …but practice what you preach.

But even more than on the form, it is imperative that the new coalition delivers on the substance: the promised change of tone needs to be underpinned by setting the right example. In this sense, an experience at the local level in the administration of the coastal city of Budva is a cautionary tale. Local elections in Budva in 2016 returned a result that allowed a change of power from the  DPS to a composite majority in the city council, similar in composition to the one now taking power at the national level. From a governance perspective, that experience developed in an alarming way: Democratic Front (DF) politician Marko Carević (who assumed the office of mayor of Budva in 2018) personally profited from public procurement to the tune of €1.9 million. Replicated at national level, this road would lead to secure ruin, as it would prove, in the eyes of the public, that ‘all politicians are the same’ – as summed up in the words of the Serbian activist quoted above.

A change of blood among the people running the State’s institutions will be crucial for reformatting the country. The new team of ministers was announced as an ‘expert government’: let that statement of purpose not be mere window-dressing, but truly set the tone. The guiding principles of the professionalisation of the institutions, the rationalisation of spending, and the drastic curbing of clientelism should be followed through. Promptly depoliticising key institutions such as the Anti-Corruption Agency would give a strong signal.

4. …but strive towards creating a ‘consensual elite’.

Perhaps counterintuitively, however, the new political leaders must not fall in the trap of purging the state apparatus of any sign of the previous guard: installing the same obedient type of civil servants will do Montenegrin democracy no good. In Serbia, the decision to substitute all the people in charge at state-owned companies created, in certain cases, a gaping hole and “catastrophic lack of professionalism”, as a Serbian energy expert characterised the change of the guard at the electricity utility, EPS, in the early 2000s, which exposed it to even greater rent-seeking practices. An important signal of the changing tide would be to keep in charge figures who stood out for their high-quality work, regardless of their political affiliation.

This course of action has good grounding in theory. Elite circulation (incorporating some elements of the old while allowing space for the new) is said to be characteristic of a consensual elite, which is present in a consolidated democracy. Elite reproduction, which stifles the emergence of new cadres, produces fragmented elites, and is usually present in unconsolidated democracies. The elite development model of replacement or quasi-replacement is, in fact, most characteristic of totalitarian or authoritarian regimes. It follows that the first road should be the one to strive for: a model in which “there is high certainty about the rules and about the practices that flow from them, but low certainty about the political outcomes, with today’s winners likely to become tomorrow’s losers” (Higley and Lengyel).

5. Embrace a global anti-corruption push and set an example for the region

Montenegro is infamous for being a captured state. From the cigarette smuggling with the Italian crime families Camorra and Santa Corona Unita in the 1990s (and later), to Daphne Caruana Galizia’s murder in recent years, the country’s involvement in global dynamics of organised crime and corruption has resonated far wider than its own borders – not unlike Serbia’s embargo-busting experience. There are concrete legislative steps the government can take that would place Montenegro at the forefront of global anti-corruption and anti-money laundering discussions.

From the setting up of a thorough register of beneficial owners, to setting stricter rules for its sprawling high-end real estate industry (a boon for money launderers), to implementing a Global Magnitsky-style law that would take into account grand corruption as well as human rights abuses, there are ways for the government to show that they are serious about tackling these grave problems head on and potentially turn Montenegro’s bad reputation on its head. While some of these discussions are contained in the EU negotiation talks, Montenegro going the extra mile in this field would be truly significant.

These are but a start…

…as there are, obviously, a great number of challenges that stand in front of the new government. Building a truly inclusive Montenegro – and thus rebuking the insistent criticism according to which Serbian nationalism and Russian influence are those that stand behind the overthrow of the supposedly ‘civically minded’ DPS – is an important one. There is a long way to go in this sense: the recent statements by DF MP Jovan Vučurović denying the Srebrenica genocide are absolutely unacceptable and should be condemned as such. Making good on the promise of keeping Montenegro firmly on a pro-EU and pro-NATO track is another crucial, and related, tenet. Implementing a strong economic programme that delivers growth while ensuring that it balances off inequalities, rather than deepening the divide, is of course key.

But if Montenegro’s new government manages to deliver on the all-important issue of the rule of law, the next one will be better placed to take on these, and other, topics. All the dirt will not be eradicated at once, but it is time for some serious elbow grease.

The Parliament of Montenegro elected a new Government

Reply Retweet Favorite
[EWB Interview] In a recent article, @edwardpjoseph proposed a way to restore the leverage of the European Union a… https://t.co/vBBRPDjpoR

Reply Retweet Favorite
The final conference within the project “Strengthening the Rule of Law in the WB: Old Tools for New Rules”, also fe… https://t.co/58z32R8BFI

Reply Retweet Favorite
Since the election of the new government in October 2020, which coincided with the annual EC report, #Serbia 🇷🇸 has… https://t.co/U13AoMHDHV

Reply Retweet Favorite
Agreeing on reality is the only way for all stakeholders to move forward on the European integration process 👇… https://t.co/c6ziJ4GBxq