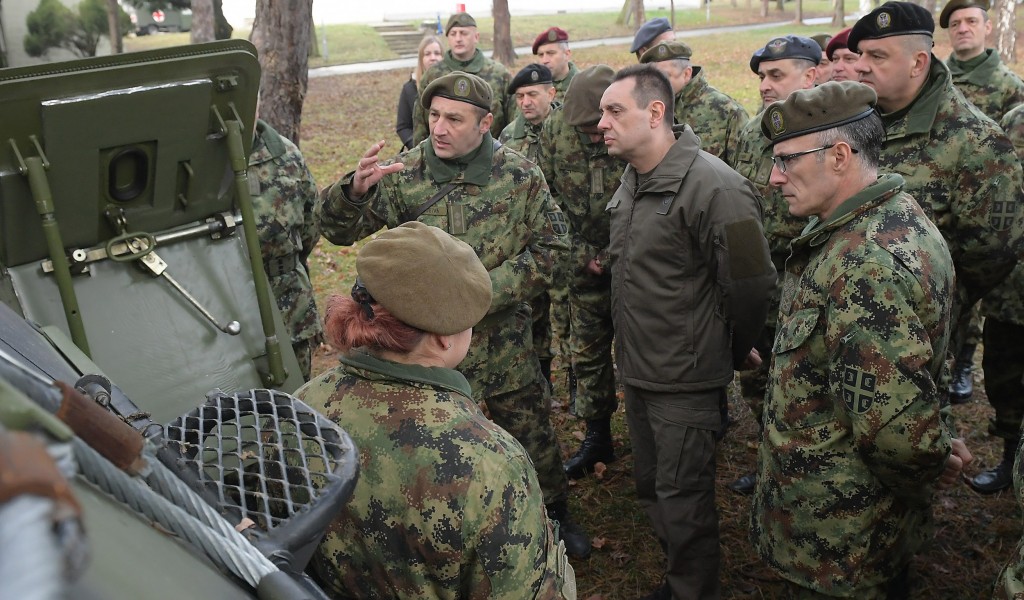 After explaining that Serbia is under terrible and undeserved pressure of the European Union, the former Minister of Defence announced in September that Serbia was introducing a moratorium, i.e. cessation of military exercises with all partners.

“In the coming period, we will not participate in any exercises or military activities, not with NATO, not with CSTO, not with Russia or the U.S., not with China, not with the European Union, neither with the East nor the West. Our participation in peacekeeping operations will be separately considered and, as needed, suspended”, the Minister said.

The decision on the suspension of international military cooperation was made immediately prior to the joint exercise of Russian, Belarusian and Serbian paratroopers.

The exercise was held in a specific context, in which Russia gave full support to the Belarusian president, Alexander Lukashenko after election, while Serbia joined the EU Declaration on the presidential election, which stated that the citizens of Belarus had expressed their desire for democratic changes during the election campaign, but the election had been neither free nor fair.

Military analyst Aleksandar Radić said for European Western Balkans that Russia had intended to provide veritable support to Lukashenko by these exercises, but in this way the nature of the exercises changed.

“Instead of an anti-terrorist exercise where our forces and special units would train for real situations, the essence of this exercise changed so drastically that the number of participants from Serbia was brought down to a minimum, and the exercise itself transformed into a demonstration of resolving a potential conflict between NATO and Belarus”, Radić explains.

The Serbian authorities explained their decision on the suspension of military cooperation with the position that this was the only way for Serbia to maintain its policy of military neutrality.

Our collocutor believes that the decision of introducing a moratorium was the result of avoiding facing the consequences of a confusing long-term foreign and defence policy.

“The decision on six-month suspension is unprecedented. The public is not aware of the gravity of such a decision. There are no regimes that cooperate in this way – by stopping cooperation. This is deeply humiliating to Serbia and its Armed Forces”, Radić believes.

According to him, this decision brings Serbia to a position where it cannot be trusted as a partner.

“The actual exercises were preceded by a series of planning meetings where the exercises were agreed on, and then the minister said that Serbia would not participate. We are sending a message that we are unstable and lack credibility”, our collocutor said.

According to him, the consequences of this decision are far-reaching and put into question the quality of future cooperation.

“The consequence of this unprecedented decision is a loss of trust in Serbia as a partner. It also puts into question the quality of future cooperation. The moratorium was introduced in a period that is key for the annual plan which defines the scope and manner of cooperation in 2021”, Aleksandar Radić explains for EWB.

The annual plan of cooperation of the Ministry of Defence and Serbian Armed Forces specifies bilateral cooperation with countries for the current year. This document, among other things, defines which military exercises and training will be held, along with all other forms of cooperation.

“Since the moratorium was introduced, this period was missed. The following year will be a series of improvisations, both in Serbia’s foreign and defence policies. Cooperation will be brought down to a minimum – it will be more about adhering to formalities than searching for an honest partnership”, Radić said.

The NATO Office in Belgrade sent a written response to EWB, saying that specific events have not been planned with Serbia in the following period.

“We have not planned any specific events with Serbia in the following months, but we remain committed to our partnership in the interest of stability and security in the region”, they said from NATO.

According to them, NATO helps Serbia implement reforms of security forces and institutions, in addition to which NATO trains Serbian soldiers for participation in international missions.

“Serbia and NATO worked together to train Iraqi military medics, thus supporting the Armed Forces of Iraq. Also, NATO and Serbia work together to be more prepared to face disasters such as floods and forest fires”, the written response states.

NATO: No events planned with Serbia

After the decision on introducing the moratorium was made, a written answer by an unspecified NATO official to Voice of America said that NATO had not planned any events with Serbia.

The answer stated that NATO wants to have long-term partnership with Serbia, which the Alliance values.

“Like all our partnerships, it is based on the needs of the partner country”, they said from NATO.

On the other hand, NATO officials said on many occasion that they respect the decision of Serbia to choose its security arrangements and whom it cooperates with.

According to Aleksandar Radić, the decision on moratorium is, among other things, the reason why Serbia did not use NATO capacities during the pandemic, to which it was entitled even though it is not a member.

“This is a club whose members are all around us. If you are not cooperating with this organization, you are excluded from some mechanisms of administrative nature. Serbia waived these on its own”, Radić believes.

Radić pointed out that the aim of the decision on the moratorium was to conceal from the local public that Serbia is distancing itself from Russia.

“This was done very clumsily. If you decided something, there was enough time to explain to partners that, given the new circumstances and political directions, Serbia had to withdraw. No one had to wait until the last moment”, Radić said.

As he explains, negative emotions in Serbia-Russia relations exploded after the signing of the agreement in Washington.

He concluded that this scenario was extremely negative for NATO, thus the consequence of this Government’s decision will in fact be exclusively future military cooperation between Serbia and Russia.

Though it was not considerably noticed by the public, the decision on introducing a six-month suspension of military activities between Serbia and all partners will undoubtedly impact the country’s activities in this field in 2021.