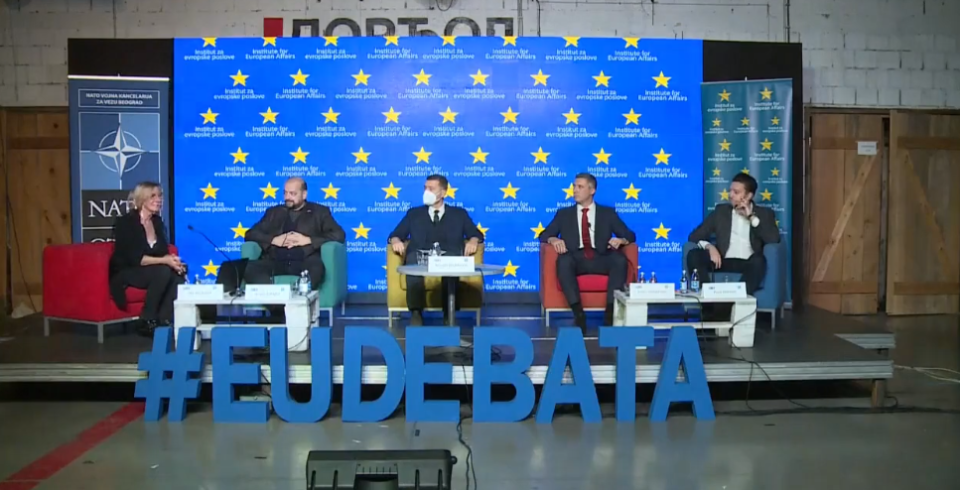 BELGRADE – In Serbia there should be a serious discussion about Serbia’s foreign policy, but also the benefits of cooperation with NATO, it was said at last night’s debate “Serbia and NATO more than two decades after the conflict – is it time for membership” organized by the Institute for European Affairs (IEA).

When asked whether Serbia should join NATO, Pavle Grbović, the president of the Free Citizens’ Movement (PSG), believes that this is an explicit question at the moment and that there are a number of reasons for that.

“First, because no one really called us there. There are statements by the Secretary General that the door is open to Serbia, which does not mean that at the moment Serbia declares its desire to join, it will become a member that right moment”, said Grbović.

As the third reason, he states the lack of support of the citizens for that topic, which is the result of the hypocritical attitude of the government towards it. According to Grbović, although Serbia has developed cooperation with NATO, the hypocrisy is reflected in the presentation of that cooperation.

Dragan Šormaz, MP from the Serbian Progressive Party (SNS) and head of the Delegation of the National Assembly of the Republic of Serbia to the NATO Parliamentary Assembly, agreed with Grbović that there are many unknowns of that cooperation, which is the fault of all politicians.

“Since 2000, no government has tried to explain the benefits of NATO membership, and we even keep silent about the benefits of joining the EU, which is unbelievable to me,” said Šormaz, adding that he himself was a target of criticism in the parliamentary circle because of his views.

Šormaz explained that Serbia cooperates with NATO through the Partnership for Peace (PfP) program and that Russia also has such agreement, but since 2015 it has been suspended due to the situation around Ukraine and Crimea.

“We have reached IPAP, the second in a row. That is the maximum level of cooperation, and after we can only apply, and we are not in favour of membership”, explained Šormaz and added that Serbia for the application needs only Membership Action Plan (MAP).

The only panellist who explicitly opposed NATO membership was Boško Obradović, the president of the Serbian movement Dveri, who also points out that membership can be a legitimate political stance, but that it should be discussed with arguments.

He pointed out that he has an emotional attitude towards this issue, because Serbia, together with Republika Srpska and Montenegro, was the only country in Europe that was bombed, also without United Nations mandate. In addition, he states that membership raises a number of questions – whether NATO membership is a condition for joining the EU, whether Serbia will participate in the “NATO wars”, whether it will participate in the encirclement of Russia and whether it will go beyond the resolution of the National Assembly from 2007.

He states that, in addition to that, every year Serbia is closer to NATO and there is only one step left, and that is applying for membership.

“As a new generation of politicians, we can talk about NATO. Of course, we can sit down with them to talk, but did we get an apology, did we get compensation. The matter is not simple and that is why we have to talk openly”, stated Obradović.

Nebojša Zelenović, the president of the Together for Serbia party, had a somewhat more restrained position, and did not explicitly state whether he would accept Serbia’s membership in NATO, but pointed out that the current policy pursued by Serbia is not on the right track.

“Our policy is a strategic partnership with the West because we think it leads Serbia to a better life,” Zelenović said, adding that he is ready to sit down and talk to anyone in favour of Serbia’s membership in the Alliance.

In order to determine ourselves towards NATO, Zelenović believes that it is necessary to explain what is good for Serbia, what is NATO, but also what is happening with Kosovo.

“The position is much more complex than two or three questions. We must first define what the West is. We have never had a strategic agreement with the West, and as the Anglo-Saxon proverb says, ‘When you get on the wrong train, all the stations are wrong’. We observe different phenomena from different trains”, explained Zelenović.

He states that the fact is that life has been bad in Serbia all these years, and that is why there must be one pillar of foreign policy. A strategic agreement with NATO would achieve “serious stability” that allows for “good investments”, more money in the budget and better salaries.

Benefits and interests of Serbia

On the other hand, when he thinks about this topic, Grbović points out that he first looks at the interest of Serbia, and the fact is that no country can enter NATO with the unresolved issue of its borders – which is the case with Serbia.

“NATO is not just a military-defence alliance, but a par excellence political organization. Important countries participate in that organization and we should not have bad relations with them”, states Grbović.

In addition, he states that within NATO there are numerous projects on which Serbia cooperates, which are not exclusively related to the military field, that the public in Serbia should be informed about in a proper and objective way.

Grbović also adds that the victims of the 1999 bombing should not be excluded, but we must also not forget that “new generations are maturing” who were not born and who have nothing to do with the events of 1999.

“I want space to be opened for arguments to be heard from one side, from the other and from the third side. When the interest of the Republic of Serbia is measured, then it should be the official course of Serbia. That is currently not the case”, Grbović points out.

“I don’t think there are any pillars of foreign policy. Our foreign policy is being created by the interest of those in power, and it can be agreed with one, with the other, with the fourth side. In essence, Serbia is an equally unreliable partner for everyone. Serbia is neither pro-European, nor pro-NATO, nor pro-Russian, nor pro-Chinese. Serbia is pro-nothing,” emphasized Grbović.

Šormaz, on the other hand, states that “NATO is just a word used against the West precisely because of that emotional approach.” He adds that he himself took part in the war in 1999 as a member of the air defense unit, but that he points out that it is necessary to “open up and think”. “We had victims and we had consequences, but 20 years have passed,” points out Šormaz.

He agrees with Zelenović that Serbia’s strategic partners should be primarily the United States and the EU, and that good relations should be maintained with all other countries.

He sees public diplomacy as the only problem, because when it comes to the first Individual Partnership Action Plan (IPAP) between Serbia and NATO, he states that “everything was done properly” and that the assessments from Brussels were perfect.

“Few people know that in Varvarin, where the bridge was bombed, the American army built a kindergarten. No one talked about that. To begin with, we need to talk about how much we cooperate with NATO and what those benefits are”, concludes Šormaz.

He explains that cooperation does not necessarily mean membership, because many European Union countries are not members of NATO. Once Serbia joins the EU, then it enters under the NATO umbrella, because the EU relies on NATO.

Grbović also thinks that European and Atlantic integrations are separated and that the EU is not a package arrangement after Serbia’s entry into NATO.

EU negotiates with the Western Balkans to enhance border management