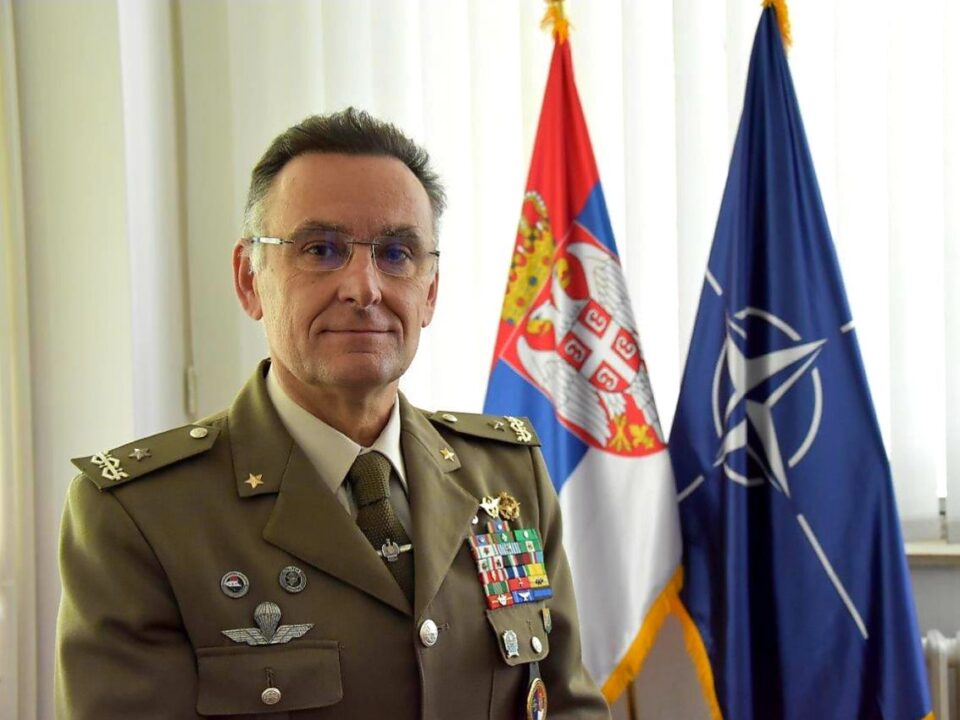 BELGRADE – The public does not see how much NATO and Serbia have been working together for almost 15 years since the signing of the Partnership for Peace (PfP), said Brigadier General Tommaso Vitale, head of the NATO Military Liaison Office in Belgrade, in an interview with the Council for Strategic Policy portal.

Assessing the relations between the Alliance and Serbia, Vitale pointed out that their partnership has been developing over the last 15 years on a political and practical level.

“We see Serbia as a valued, committed and respected partner in our efforts to consolidate security and stability in the Western Balkans. Albeit perhaps not at first glance, the NATO-Serbia partnership is indeed multifaceted if you take a deeper look”, Vitale stated for the portal

“NATO’s partnership with Serbia is based on a request from the Serbian authorities and is conducted in full respect of your country’s stated policy of military neutrality. In other words, we are here to assist and to support Serbia according to its own priorities. All our efforts are therefore tailor-made to Serbia’s needs”, Vitale said.

He stated that at the end of 2019, Serbia and NATO renewed the Individual Partnership Action Plan (IPAP), which, according to him, was a big step, because a platform for cooperation was provided during the next two years.

In addition, Vitale pointed out that Serbia has been part of the Planning and Review Process (PARP) for thirteen years, the basic mechanism of the Partnership for Peace, whose goal is to improve interoperability between the Allies and Serbia.

“Through PARP, Serbia has been strengthening the capacity and operational standards of its armed forces taking part in international missions led by the UN and the EU, for which Serbia is a well-known and respected contributor across the world”, Vitale stated.

“I would like to take this opportunity to also mention the Operational Capabilities Concept (OCC), a PfP mechanism through which Serbian units can be trained and evaluated according to NATO standards. Through the Operational Capabilities Concept partner countries, including Serbia, have access to well-tested NATO procedures and standards; and this helps to significantly improve their respective defence capacities”, Vitale stated for the portal and added that this is mutually beneficial for both NATO and Serbia because both sides are learning from each other.

Vitale stated that Serbia and NATO also cooperate in the field of the NATO Program for the Advancement of Defense Education (DEEP), where Serbia offers its valuable experience in the reform of educational institutions in the field of defence, which, as Vitale states, “a critical aspect in its own right for the security of many countries”.

When he was asked to comment on the recent announcement that a Russian military office would be opened in Belgrade, Vitale said that NATO fully respects Serbia’s policy of military neutrality and sovereignty over security arrangements and that it is best to ask those questions to Serbian and Russian authorities.

Vitale thinks that public diplomacy is the biggest challenge for NATO in Serbia because the public does not see how much NATO and Serbia work together and is still not sufficiently informed. He states that NATO is open and transparent and that it will do everything to make their “colleagues at NATO Headquarters in Brussels explain what NATO is, to communicate with Serbian media in order to present an accurate and factual of NATO and partnership with Serbia”.

“When we talk about NATO, not everyone in Serbia is aware that NATO is actually an alliance of 30 democracies. Some of those countries are among the biggest investors and economic partners of Serbia”, Vitale said.

Speaking about the KFOR mission in Kosovo, in which he was a part of for a year, Vitale stated that NATO remains committed to fulfilling its role throughout Kosovo, in order to preserve a safe and secure environment and freedom of movement for all communities in Kosovo, according to Security Council Resolution 1244.

“The NATO-led KFOR was my first operational mission. I learned a lot during my time in Kosovo: I witnessed the suffering and hardships of local people, but at the same time I was able to see the remarkable dignity of those citizens during such a difficult time for them”, Vitale explained.

He believes that the past should never be forgotten, but it must be overcome, and that is what NATO and Serbia are doing with this partnership.

Kordić and Popa: The Montenegrin government continues its pro-European course