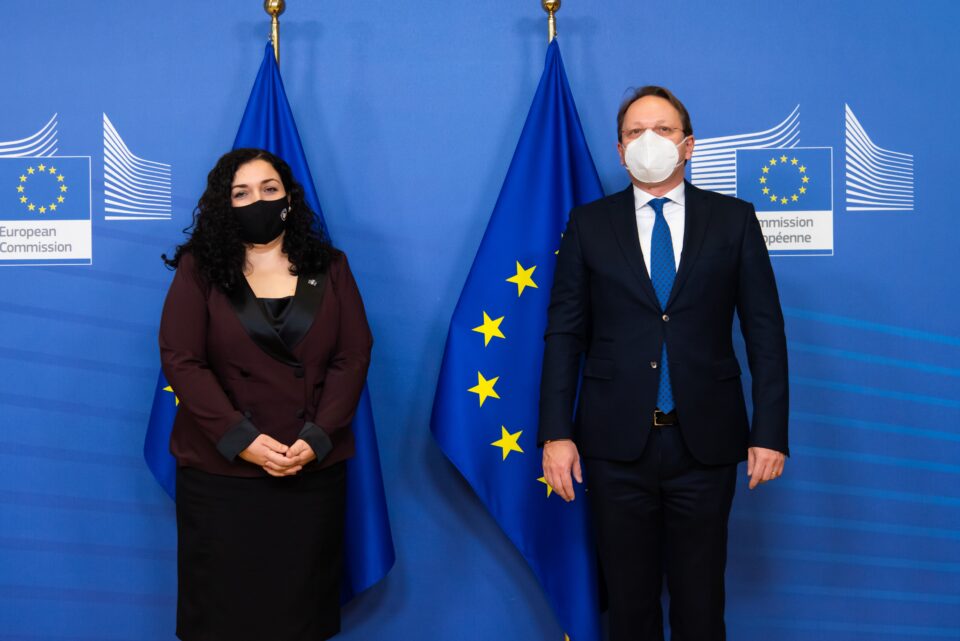 Osmani expressed her gratitude to the EU for the continued support to the Republic of Kosovo, in particular during the period of confrontation with the COVID-19 pandemic. Further EU support in provision of the vaccines for the citizens of Kosovo and the Economic Investment Plan were issues discussed at the meeting, it was stated in a press release.

She stated that the EU integration process is one of the main goals of the foreign policy of the Republic of Kosovo, thus confirming the will of the country’s institutions and of all citizens towards further advancement in this process.

“It is important to be aware that the lack of ambition or engagement of all parties involved in the European integration process, means that the support and trust of citizens in the path of EU integration may be damaged,” said Osmani.

It is added in the press release that Osmani reiterated that the Republic of Kosovo has met all the formal criteria for visa liberalization for the Schengen area during her meeting with Várhelyi.

Várhelyi pointed out that he had a good meeting with Osmani.

“We stressed the importance of Kosovo continuing to implement EU related reforms, including fight against corruption and organised crime, and to cooperate in the region, while drawing benefits from the Economic and Investment Plan”, wrote Várhelyi on his Twitter account.

At the meeting with Sassoli, Osmani thanked him for the proactive role of the European Parliament in supporting Kosovo on its path to EU.

“The European Parliament was and continues to be the most vocal institution in the EU regarding the Republic of Kosovo, seeking not only visa liberalization for the citizens of Kosovo but also in assisting the state of Kosovo through various initiatives. Kosovo has met the criteria, so the EU must keep its promise to Kosovo by liberalizing visas”, said Osmani.

Sassoli pointed out that he is glad to see that Kosovo remains on the parh of reform, which will lead to a more prosperous future.

“Fighting crime and corruption will bring you closer to the EU and improve the lives of all citizens. The EU is here to support,” Sassoli wrote on his Twitter account.

In relation to the dialogue with Serbia, Acting President Osmani stressed the need for the unification of the entire political spectrum of the country around this process, in order for it to be completed successfully. She called the EU to be loud in relation to Serbia, in order for this country to implement the agreements signed in Brussels.

Miroslav Lajčák said that he appreciated hearing Osmani’s views on her visit to Brussels, the situation in Kosovo, upcoming parliamentary elections and the Belgrade-Pristina dialogue.

During her stay in Brussels, the Acting President of Kosovo also met with members of the European Parliament who are part of the Kosovo Friendship Group: Rainer Wieland, EP Vice President, Lukas Mandl (EPP), Viola von Cramon-Taubade, rapporteur for Kosovo in the EP Ilhan Kyuchyuk of the Renew Group and Andrey Kovatchev, Vice President of the EPP.