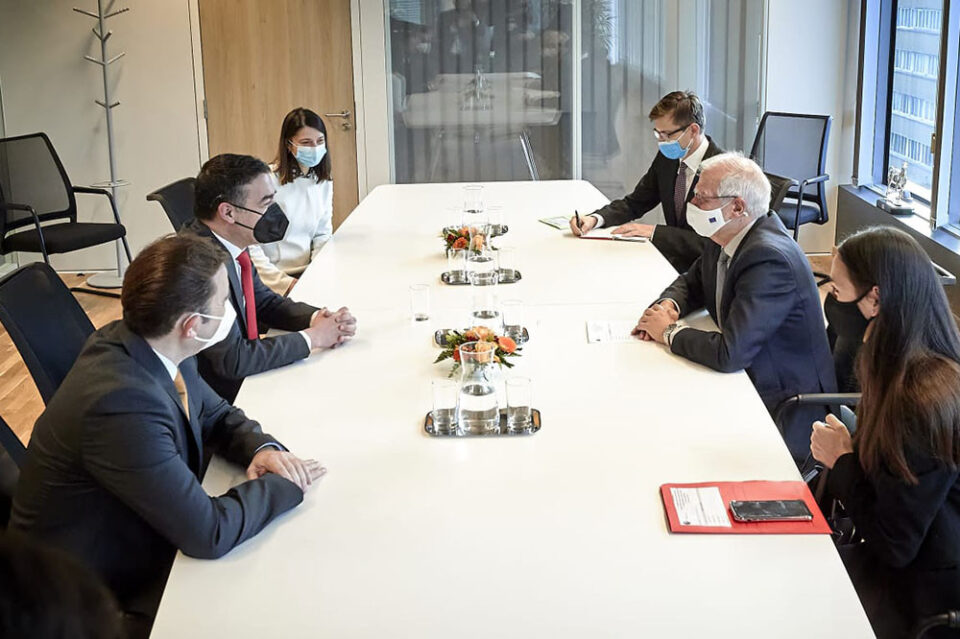 High Representative Josep Borell during the meeting with Osmani and Dimitrov; Photo: Twitter

According to a press release, he had a frank and open discussion with Osmani and Dimitrov on finding a solution to unblock accession negotiations.

They also discussed the privileged partnership between the EU and the Western Balkans in handling the challenges linked to the COVID-19 pandemic, including accession to vaccines.

Nikola Dimitrov said that North Macedonia is ready to continue to move forward.

„Constructive meeting with Josep Borell on maintaining the dynamic and credibility of EU – Western Balkans ties. Accession process that holds the core European values at its heart is the only way to make the region more European“, wrote Dimitrov on Twitter.

Foreign Minister of North Macedonia told that the EU credibility and perspectives of the enlargement process have an utmost impact and stimulus.

Today, Osmani and Dimitrov met with the EU Special Representative for the Western Balkans and Belgrade-Pristina Dialogue, Miroslav Lajčák.

„I was indeed impressed by Dimitrov and Osmani’s dedication and resolve to make the European future a reality for all people of North Macedonia“, Lajčák said.

During the meeting, they exchanged views on current affairs in the Western Balkans.

„Our region has indeed a very rich history, but it is time to show that the living generation can also make achievements we can be proud of today“, Dimitrov concluded.