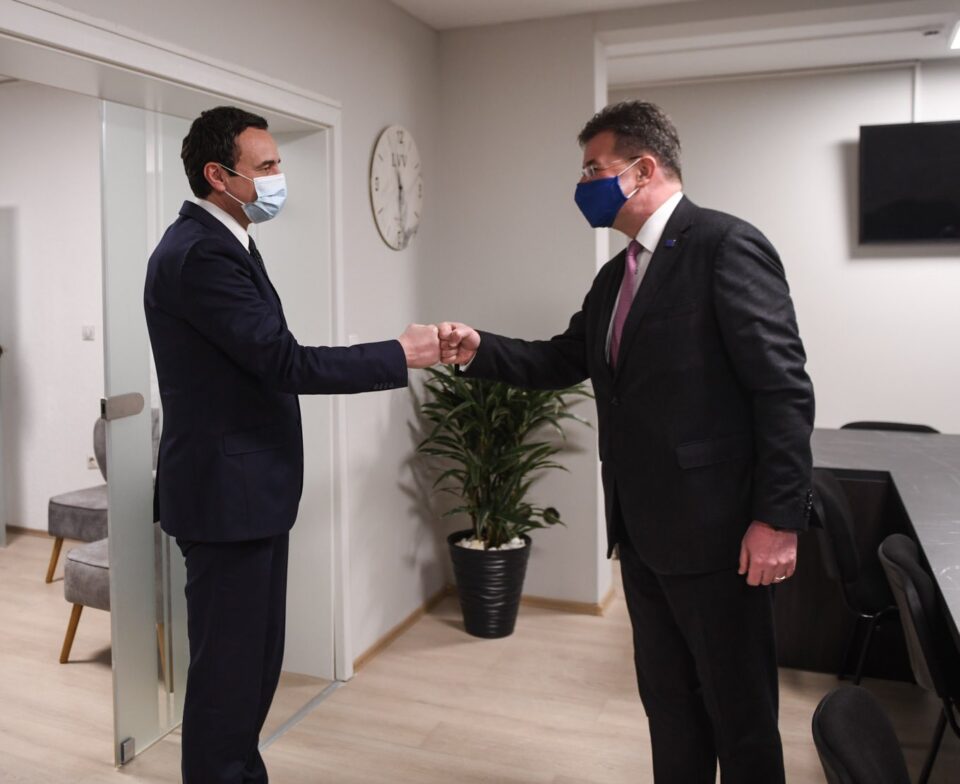 PRISTINA – EU Special Representative for the Belgrade-Pristina dialogue Miroslav Lajčák arrived in Kosovo yesterday and began his three-day visit with a meeting with Albin Kurti, whose Self-Determination party won the recent snap parliamentary elections in Kosovo.

After a one-hour meeting, Kurti reiterated his view about the dialogue with Belgrade not being a main priority of the next government he might head again, Kossev reports.

„No date is set, because we have to form a government and the election results must be confirmed. The new cabinet will have a foreign minister for all organisational activities. I’m not against the dialogue in priciple, I am for principled dialogue,“ said Kurti and added that the next government priorities included justice, new jobs and the fight against the coronavirus epidemic, KoSSev reports.

However, Lajčák reiterated the message sent by the European Union the day after the Kosovo elections – that the EU expects the dialogue to continue soon after the formation of the Kosovo government.

“Serbia and Kosovo have European ambitions and the European Union was very clear – normalization of relations is a precondition and that is what the member states expect, there is no detour,” said Lajčák.

In an interview for Serbian news agency Tanjug he underlined that Albin Kurti knows very well what is expected from him – the continuation of the dialogue and he is ready for that. Lajčák pointed out that an agreement can be reached within a few months, but added that it depends on the parties in the dialogue.

He added that he expects during his mission and from talks with the two sides to know when it will be possible to resume negotiations.

KoSSev states that Lajčák underlined that the goal is to reach a comprehensive agreement that will resolve all open issues between the two sides, including “agreements on new issues”, but also already reached agreements that have not yet been implemented “such as the Community of Serb Municipalities”.

His visit came after several months of pause in Brussels negotiations between Belgrade and Pristina, the fall of Kosovo’s government, and the following early elections.

Kosnett: The US supports a collaborative, EU-led dialogue process

After the meeting with Kurti, Lajčák also met with KFOR Commander and US Ambassador Philip Kosnett.

“At today’s meeting with EU Special Representative Miroslav Lajčak, we reaffirmed U.S. support for a collaborative, EU-led dialogue process. Our goal: a comprehensive settlement and deeper Euro-Atlantic integration that benefits all Kosovo and Serbian citizens”, wrote Kosnett on his Twitter account.

At today’s meeting with EUSR @MiroslavLajcak, reaffirmed U.S. support for a collaborative, EU-led dialogue process. Our goal: a comprehensive settlement and deeper Euro-Atlantic integration that benefits all Kosovo and Serbian citizens. pic.twitter.com/Sc0ddcv40K

Osmani: The dialogue process should be reviewed

Lajčák began the second day of his visit to Kosovo with a meeting with the acting President of Kosovo Vjosa Osmani.

Vjosa Osmani pointed out that she told Lajčák that the current part of the process should be reviewed, so that Pristina would be ready to continue the talks, respecting its interests, emphasizing that the dialogue process should result in reciprocal recognition, within the current borders of Kosovo, FoNet reports.

“We must be sure that the mandate we receive from the parliament is respected, the red line set by the parliament. It is not allowed to negotiate the borders of Kosovo. There is nothing to negotiate about the status of Kosovo, we expect it to end with recognition,” said Osmani.

“The dialogue is not a responsibility of only one political party but of all parties”, Lajčák highlighted.

After Pristina, Lajčak will visit Belgrade on March 3rd, where he will meet with Serbian President Aleksandar Vučić, and Montenegro on March 4th and 5th.

Merkel and Macron to host a Serbia-Kosovo Summit on Friday