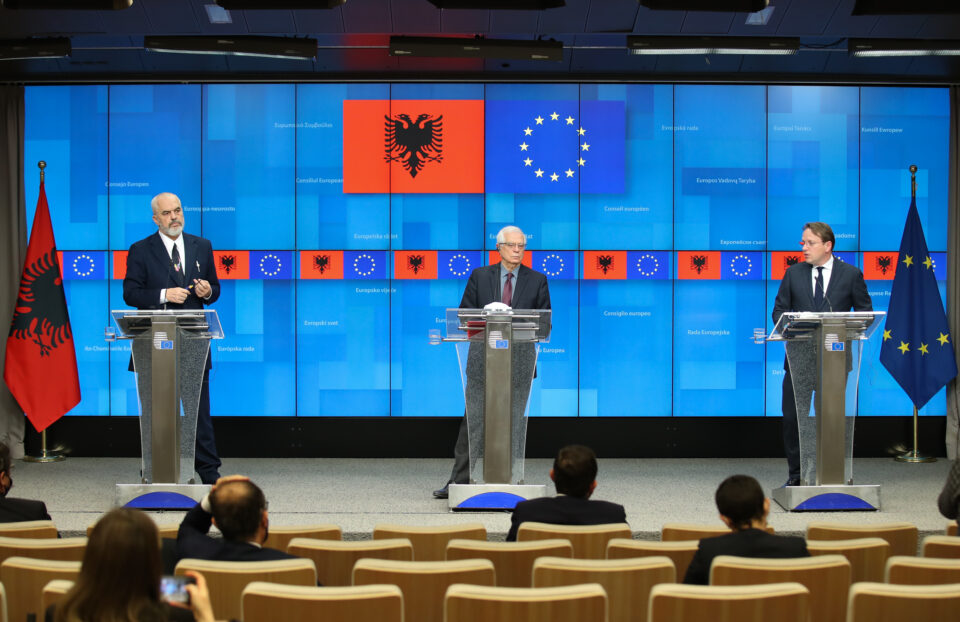 Albania and the European Union the eleventh meeting of the Stabilization and Association Council; Photo: European Council

BRUSSELS – Albania and the European Union held the eleventh meeting of the Stabilization and Association Council (SA Council) on Monday.

Through a statement to the media, the SA Council assessed the challenges that Albania has had to cope with and its path towards the European Union.

“The SA Council welcomed the historic decision by the Council of the European Union in March 2020 to open accession negotiations with Albania. The SA Council positively noted the European Commission’s 2020 Albania Report, which assessed that Albania increased its efforts and delivered further tangible and sustainable results in the key areas identified in the Council Conclusions,” was written on the statement, further arguing that Albania has made progress in reform areas, including the rule of law and the judiciary.

“The SA Council took note of and reviewed progress in reform areas including the rule of law and the judiciary, respect for fundamental rights, public administration, economic policy, education and employment, connectivity, and the green agenda. The SA Council commended Albania’s determination in the pursuit of its EU reform agenda,” the statement further reads.

The SA Council took positive note on the vetting process and the resumption of work of the Constitutional Court and the High Court.

“Particular emphasis was given to the process of re-evaluation of judges and prosecutors (“vetting process”) as well as to the Constitutional Court and the High Court, both of which have resumed functioning,” the Council writes.

The meeting had a particular focus on the parliamentary elections that Albania is going to hold on April 25, and the Council called on all parties to respect recommendations of the OSCE/ODIHR.

“The SA Council took note of progress made in the practical preparations for the forthcoming elections. In this regard, the SA Council agreed on the need for further follow-up on all the aspects covered by the OSCE/ODIHR recommendations, as well as Venice Commission recommendations as regards future elections,” the statement concluded.

The meeting was chaired by the High Representative of the European Union for Foreign Affairs and Security Policy, Josep Borrell, while the Albanian delegation was led by Prime Minister Edi Rama.

“When it comes to fight against COVID-19, the EU continues to stand by Albania. We provided significant support on recovery through the Economic and Investment plan for the Western Balkans. We also to ensure access to vaccines, through COVAX, because we care”, wrote Varhelyi on Twitter.

High Representative Borell told that Albania is a key partner of the European Union and a reliable security partner and in many respects a role model in the region.

“Albania is now consistently 100% aligned with our European Union foreign policy decisions. In doing so, it sends a strong signal of your commitment to the European Union accession and serves as a positive example for the region. Because we cannot say the same thing for all the countries in the region”, Borell said, adding that the EU is Albania’s strongest partner.

The SA Council welcomed the historic decision by the Council of the European Union in March 2020 to open accession negotiations with Albania, adding that the looked forward to holding the first intergovernmental conference as soon as possible after the approval of the Negotiating Framework.

During the meeting, they took note of and reviewed progress in reform areas including the rule of law and the judiciary, respect for fundamental rights, public administration, economic policy, education and employment, connectivity, and the green agenda.

The SA Council also highlighted Albania’s continuous 100% alignment with the EU’s Common Foreign and Security Policy, acknowledging that this sends a strong signal of Albania’s strategic orientation and commitment to its goal of EU membership and serves as a positive example for the entire region.

Lajčák: I expect the continuation of the Belgrade-Pristina dialogue

Plenković: EU-WB Summit in Zagreb will determine the next decade of relations