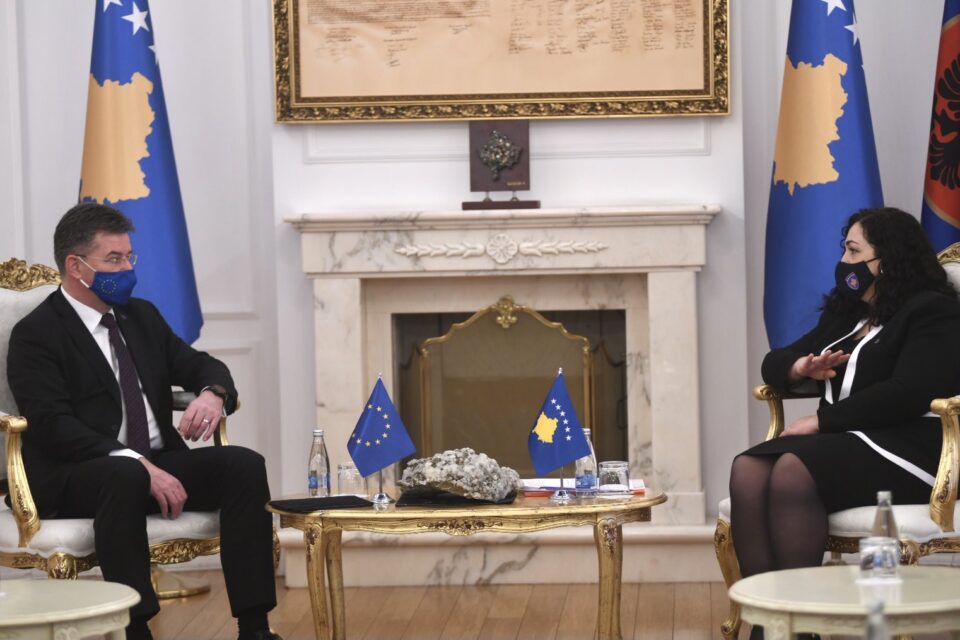 PRISTINA – During the second day of his visit to Kosovo on March 2, EU Special Representative for the Belgrade-Pristina dialogue Miroslav Lajčák met with the acting President of Kosovo Vjosa Osmani and said that “there are no obstacles to reaching a comprehensive agreement between Kosovo and Serbia during the mandates of Albin Kurti and Vjosa Osmani”.

At a joint conference with Osmani, he reiterated that the dialogue process should be concluded within a few months, not years.

“We are not rushing or slowing down this process. We are here in Kosovo and Serbia to decide how fast they want to continue. We are here to facilitate the dialogue,” he said and added that there is no need for the next ten, five or three years if there is determination and will of the parties.

However, Osmani said that the dialogue should be revised, but also that there should be no change in the Kosovo constitution.

“Kosovo can no longer make concessions in the dialogue,” Osmani pointed out.

She added that she had made it clear on behalf of Kosovo’s institutions that for them the dialogue process should be reviewed, and that would, among other things, help Kosovo to be prepared and respect its own interests and the interests of its citizens in the process that should result in mutual recognition within the current borders and with the current Constitution of Kosovo.

According to KoSSev, Lajčák arrived in Pristina with five messages, the first of which is to congratulate the democratically elected winners of the elections, while other messages are directly related to the dialogue with Belgrade.

The second message concerns the “closer” partnership between the EU and the US regarding the issue of the dialogue and with the arrival of the Biden administration. The third message expresses the EU’s support for the mandate of Kurti and Osmani and its readiness to support their priorities.

The fourth message also concerns the joint European-American support for the continuation of the dialogue with Serbia, about which, as Lajčák stated, he had a “long and very detailed” conversation during a one-hour meeting with both Kurti and Osmani.

The last message concerns the political unity in Kosovo on the issue of the dialogue, because the dialogue, as Lajčák said, is not the responsibility of one party or only the government, but also of all other political actors, civil society and citizens. That is why Lajčák met with all other parties in Kosovo during the rest of his visit.

Lajčák thanked Hoti for the good cooperation during his term

EU Special Representative also met with the Acting Prime Minister Avdullah Hoti and thanked him for the good cooperation during his term in office and his commitment to the dialogue and the European future of Kosovo.

I also met today with the Acting Prime Minister @Avdullah. I thanked him for the good cooperation during his term in office and his commitment to the Dialogue and the European future of Kosovo. pic.twitter.com/pcFLXkbque

Hoti also thanked Lajčák for the cooperation so far in mediating the dialogue process with Serbia and wished him success in finalizing this process.

The Serb List announced that the main topics of the meeting were the recent parliamentary elections and the continuation of the Belgrade-Pristina dialogue, reports KoSSev.

After the meeting with the political representatives of the Kosovo parties, Lajčák stated on his Twitter account that he spoke with them about the need to support the dialogue, which, as he stated, is in the interest of all citizens of Kosovo, and that he is “happy because they are committed to the dialogue.”

With the leaders of Kosovo’s political parties, I spoke about the need to support the Dialogue. This is in the interest of all citizens of Kosovo. And I’m happy that they are committed. pic.twitter.com/AVkfNGUhdv

“I enjoyed our exchange on the important role of women in politics and on the dialogue”, said Lajčák.