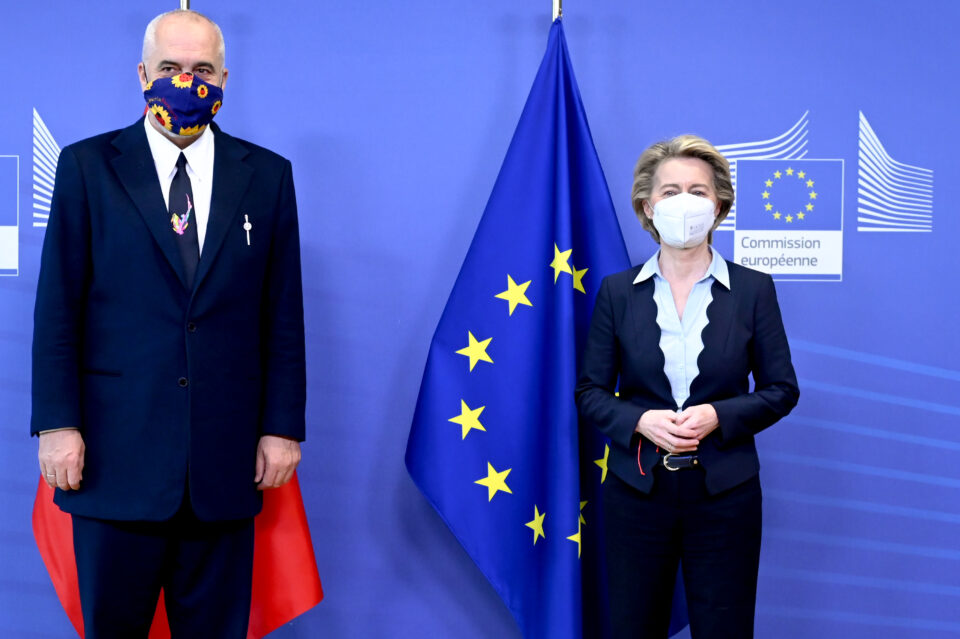 BRUSSELS – The President of the European Commission Ursula von der Leyen stated after the meeting with the Prime Minister of Albania Edi Rama in Brussels on Monday that Albania’s future is Europe and that accession negotiations should start.

She reconfirmed that all the conditions have been met by Albania, Radio Tirana International reports.

I was happy to meet with @ediramaal.

Albania can count on the EU’s support to rebuild after the earthquake & tackle the pandemic. I hope to visit Albania soon.

We discussed accession negotiations. Our position is clear: Albania’s future is 🇪🇺 and negotiations should start. pic.twitter.com/eEsCAynrXl

The head of the Socialist parliamentary group in Albania Taulant Balla stated that the European Parliament will discuss and approve in the coming days the report prepared by the Rapporteur for Albania Isabel Santos.

“The Council of the European Union is asked to set a date and hold the First Intergovernmental Conference with Albania in the report”, wrote Balla on his Twitter account.

Albania and the European Union held the eleventh meeting of the Stabilization and Association Council (SA Council) in Brussels on Monday. The meeting was chaired by the High Representative of the European Union for Foreign Affairs and Security Policy Josep Borrell, while the Albanian delegation was led by Prime Minister Edi Rama.

Through a statement to the media, the SA Council assessed the challenges that Albania has had to cope with on its path towards the European Union.

“The SA Council welcomed the historic decision by the Council of the European Union in March 2020 to open accession negotiations with Albania,” reads the statement.

The President of the European Parliament David Sassoli wrote on his Twitter account that Albania is implementing key reforms for integration into the European Union, after the meeting with the Prime Minister Edi Rama.

“Excellent meeting with the Prime Minister of Albania Edi Rama. Albania is delivering key reforms on the way to EU accession. I therefore expressed the EP’s support for the timely start of the first intergovernmental conference”, he said.

Albania is delivering key reforms on the way to EU accession. I therefore expressed @Europarl_EN‘s support for the timely start of the first inter-governmental conference.

The EU also stands ready to help in the fight against COVID-19. pic.twitter.com/2MlBEpI5GL

Albania’s Chief Negotiator for EU integration Zef Mazi said that the EU representatives, Borrel and Várhelyi praised Albania’s progress in all areas, while emphasizing that all conditions have been met for holding the first intergovernmental conference.

“The 11th meeting of the Stabilization and Association Council, the highest meeting between Albania and the EU was held today. With all the analyses that were made today, it was communicated with clarity that Albania has made progress in all areas, both political and reform in justice, economy, agriculture, social field, etc. EU representatives at the meeting praised Albania and encouraged the continuation of reforms”, said Mazi, Radio Tirana International reports.

Read more: Stabilization and Association Council: Albania has made progress in reform areas