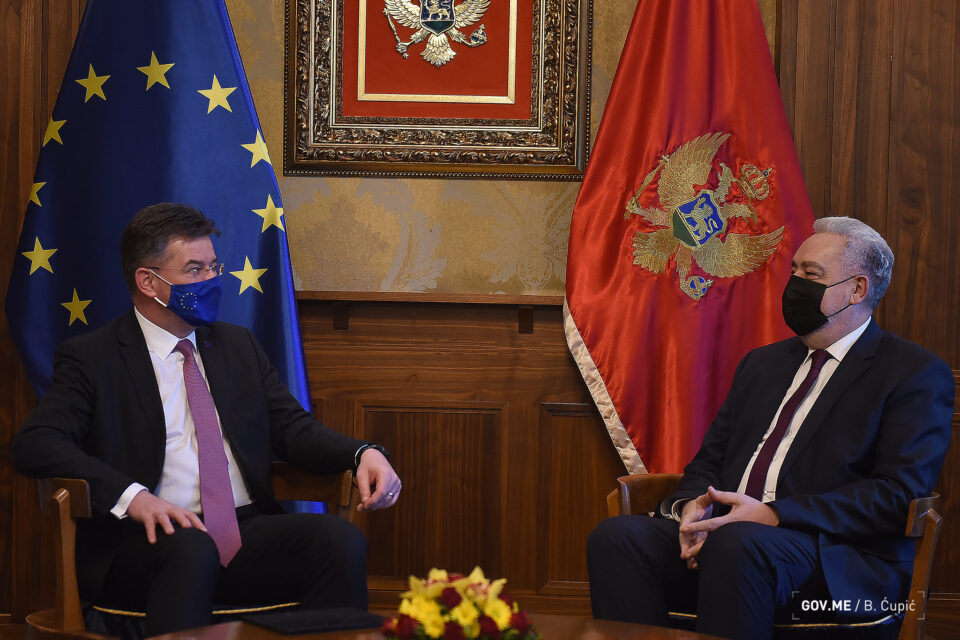 PODGORICA – The European Union expects Montenegro to firmly stand on the European road as the leader in the integration process within which it has advanced the most, the bloc’s special envoy for the Belgrade – Pristina dialogue on the normalisation of relations and other Western Balkans issues, Miroslav Lajčák has said in Podgorica on Thursday, FoNet reported.

„The European Commission (EC) has said that by the end of its current mandate, one country could end negotiations and that Montenegro is the best candidate for that,“ he said after the meeting with Montenegro’s Prime Minister Zdravko Krivokapic.

Lajčák added Montenegro had a new experience last year – the democratic change of power.
„I want to praise that mature democratic process of taking over power; it was responsible by everyone,“ he added.

Brussels expects Montenegro to maintain a policy of co-operation and harmonization with EU policies and positions, including the harmonizing with the opinion of the Venice Commission, said Miroslav Lajčák during the meeting with Montenegrin President Milo Đukanović, CDM reported.

President Đukanović recalled that the transfer of power in Montenegro confirmed that there was a new capacity for democratic culture, and stressed the need to confirm in Montenegro and in the new conditions a full understanding of Montenegro’s role as a NATO member and the practice of not acting against European standards as long as Montenegro was in partnership with the EU, President’s cabinet says.

Đukanović reiterated that the determination of European political forces in Montenegro was to support everything that leads the country to Europe and thus contribute to maintaining the dominance of pro-European thought in the Western Balkans.

Lajčák stressed the importance of respecting the country’s commitments in the negotiation process and in partnership with the EU. He welcomed the mature and responsible reaction towards the state shown by the previous government after the election results.

Lajčák concluded that regular communication with European partners was important for the integration path of Montenegro and the region, and welcomed the contribution made by the President of Montenegro in such communication, the cabinet points out.

The meeting was also attended by the head of the EU Delegation to Montenegro Cristina Oana Popa.

Majstorović: EU would “shoot itself in the foot” by not opening negotiations with Macedonia

North Macedonia once again taking lockdown measures due to COVID-19