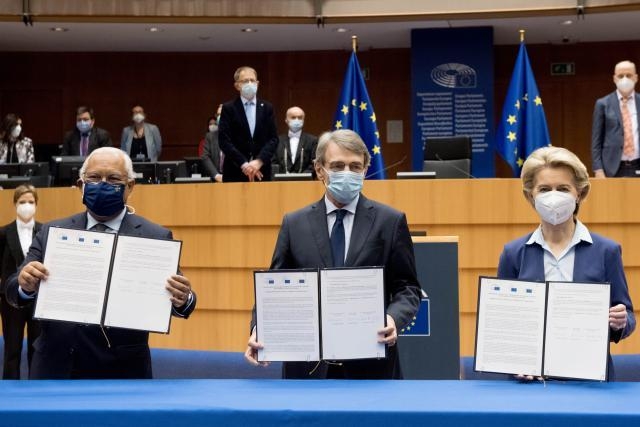 Antonio Costa, David Sassoli and Ursula von der Leyen at the signing of the Joint Declaration on the Conference on the Future of Europe; Photo: European Commission

BRUSSELS – Today, European Parliament President David Sassoli, Prime Minister of Portugal António Costa, on behalf of the Presidency of the Council, and Commission President Ursula von der Leyen have signed the Joint Declaration on the Conference on the Future of Europe, the European Commission stated in a press release.

It is added that this paves the way to launching a series of debates and discussions that will enable people from every corner of Europe to share their ideas to help shape Europe’s future.

Sassoli pointed out that today marks a new start for the European Union and for all European citizens.

“The Conference on the future of Europe will be a unique opportunity for all European citizens and our civil society to shape Europe’s future, a common project for a functioning European democracy. We call on all of you to come forward to participate with your voice to building what will be tomorrow’s Europe, what will be your Europe,” said Sassoli.

Costa highlighted that the convening of the Conference on the Future of Europe is a message of confidence and hope for the future that we send Europeans.

“Confidence that we will overcome the pandemic and the crisis; hope that together we will build a fair, green and digital future Europe,” said Costa.

Von der Leyen stressed that today, they are inviting all Europeans to speak up.

“To say what Europe they want to live in, to shape it and join forces to help us build it. Citizens’ expectations are clear: they want to have their say on the future of Europe, on matters which affect their lives. Our promise today is equally clear: we will listen. And then, we will act,” said von der Leyen.

The Conference sets itself the goal of giving citizens a greater role in shaping EU policies and ambitions, improving the Union’s resilience to crises, be it economic or health-related. It will create a new public forum for an open, inclusive, transparent and structured debate with Europeans around the issues that matter to them and affect their everyday lives.

It is stated in a press release that the Joint Declaration gives a non-exhaustive list of possible themes for the Conference. It mentions health, climate change, social fairness, digital transformation, the EU’s role in the world, and how to strengthen democratic processes governing the EU. These topics concur with overarching EU priorities and the issues raised by citizens in opinion polls. Ultimately, participating citizens will decide what topics the Conference will discuss.

The Joint Declaration sets out the scope, structure, objectives and principles of the Conference. It sets the scene for citizen-led events, to be co‑organised with civil society and stakeholders at all levels, national and regional Parliaments, the Committee of the Regions, the Economic and Social Committee, social partners and academia. Their participation in the process is essential, to ensure the broadest outreach and engagement

The Conference is invited to reach conclusions to provide guidance for Europe’s future direction.

Stano: Kosovo to form the Community of Serb Municipalities

Balkan Futures discussion: How should EU approach the region?

Pahor in Kosovo: Changing borders in the Balkans should not be discussed https://t.co/A6U1SejInF

Reply Retweet Favorite
[OPINION] Why regional cooperation should be considered as a necessity for all, read in a new op-ed by Tanja Miščev… https://t.co/Lv1UPK6ULI

Reply Retweet Favorite
The EU Ombudsman will investigate and assess the sustainability of priority gas infrastructure projects in the West… https://t.co/plSgUqSBRg