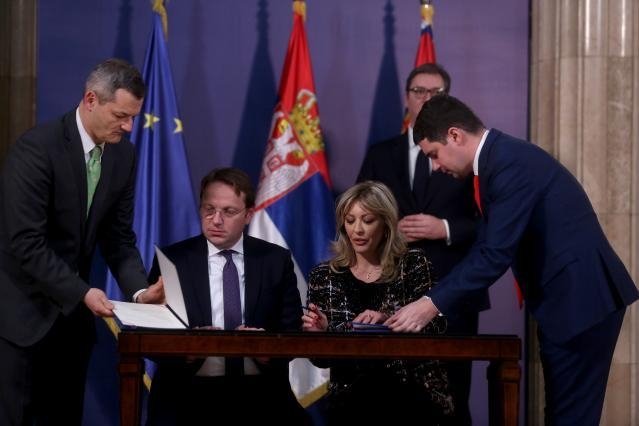 Visit of Commissioner Varhelyi to Serbia, with Minister Joksimović and President Vučić in the background; Photo: European Union

BRUSSELS – European parliament has adopted Reports on the 2019-2020 Commission Reports on Albania, Kosovo, North Macedonia and Serbia. Report on Serbia was supported by 538 MEPs while 69 was against it.

While members welcomed the fact that EU membership continues to be Serbia’s strategic goal and that it is among the priorities of the new government, they expect a clear commitment from Serbia, both in words and deeds, to fulfil its obligations towards EU membership in a visible and verifiable way.

Members noted that all parliamentary parties support Serbia’s EU integration process and encouraged the Serbian authorities to communicate more actively and unambiguously their commitment to European values in the public debate.

However, the EP Report on Serbia attracted a lot of attention because it highlighted unresolved affairs such as Jovanjica, Krušik, Savamala and Telekom Srbija.

The report stressed the importance of injecting more dynamism into the accession negotiations with Serbia but not opening any further negotiating chapters until Serbia has made the necessary reform commitments.

“Members called on Serbia to continue to strengthen the alignment and implementation of its legislation with the EU acquis. They regretted that the pace of alignment has been significantly slower than the government had originally planned, pointing to limited progress on Chapters 23 (judiciary and fundamental rights) and 24 (justice, freedom and security)”, reads the report.

It is added that they considered that normalisation of relations with Kosovo and genuine respect for fundamental rights will be essential and will determine the pace of the accession negotiations.

The report called on the new government to work on effective and verifiable structural reforms and to address shortcomings in the areas of rule of law, fundamental rights, freedom of the press, the fight against corruption and the functioning of democratic institutions and public administration. It called on Serbia to improve its fight against organised crime and to switch from an approach based on individual cases to a strategy aimed at dismantling large and internationally spread organisations.

“Members noted with concern the continuing political influence on the judiciary and the need to strengthen the guarantees of accountability, professionalism, independence and overall efficiency of the judiciary, including, where necessary, by revising the current system of recruitment and human resources management. The quality of the legislative process should be further improved by increasing transparency and social and political dialogue”, reads the report.

Members regretted the deterioration of press freedom and the increase in intimidation and even hate speech against members of the parliamentary opposition, independent intellectuals, NGOs, journalists and prominent personalities, including by members of the ruling parties.

Economy and the environment

Members welcomed Serbia’s progress in developing a functioning market economy. They called on Serbia to continue its efforts to boost competitiveness and sustainable and inclusive growth through structural reforms, in particular in the energy sector and the labour market, as well as by improving transparency and predictability in the regulatory environment.

The report called on Serbia to increase the sustainability of its energy sector by diversifying its energy sources, launching a low-carbon energy transition and moving towards renewable and cleaner energy while removing non-compliant coal subsidies. Members expressed concern about the high levels of air pollution in Serbia and urged the authorities to take swift action to improve air quality.

Serbia is urged to align itself with EU standards and policy objectives on climate protection and environment as well as energy efficiency.

Members welcomed Belgrade’s active and constructive participation in the dialogue with Pristina and the good regional cooperation between Serbia and Kosovo in the fight against the spread of the COVID-19 pandemic.

The report encouraged Serbia to sustain its efforts at all levels aimed at reconciliation and strengthening good neighbourly relations. Lastly, the report stressed the importance of alignment with the EU Common Foreign and Security Policy (CFSP), which should progressively become an integral part of Serbia’s foreign policy as a condition for the accession process.

Vajgl: Macedonia must look to the future