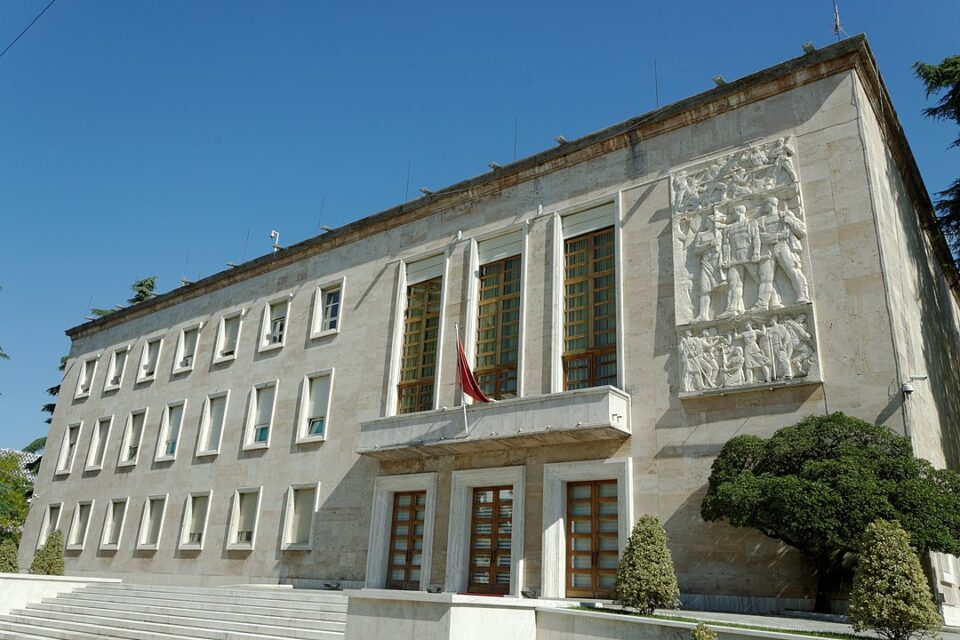 The facade of the Kryeministria, Tirana; Photo: Wikimedia Commons

As is the case with other Western Balkan countries, Albania is heading into another election, scheduled for 25 April, with the issue of prevalent corruption being unresolved. The record of the ruling Socialist Party (SP), which is seeking a third mandate, remains a mixed bag at best for some observers, while the others are much more critical and see the situation worsening in recent years. There are, however, doubts that the main challengers to the Socialists would do a better job.

Ever since it adopted a judicial reform package in 2016, the main focus of the international observers in Albania has been on the re-evaluation of all judges and prosecutors, the so-called “vetting”, as well as on the setting up of specialised anti-corruption bodies, known as SPAK. These steps, it is expected, will prepare the country for a more efficient fight against corruption.

The reactions from the EU institutions to the reforms could best be described as mild applause. As of October 2020, when the European Commission released its Report on Albania, SPAK bodies have been established, while the vetting at that point was completed for 286 out of 805 magistrates, which the Commission assessed positively. It should be noted, however, that originally the vetting process was supposed to conclude this year, which has become impossible with the current pace.

European Parliament also made its opinion known in its Reported adopted last week, when it commended “the progress made in implementing the comprehensive judicial reform, underpinned by the unprecedented vetting process and the establishment of the relevant institutions and specialised bodies”. Both the EC and the EP still noted that corruption remains prevalent and that tangible results are needed.

These assessments beg the question of whether too much focus is being put on institutional reforms and too little on the actual track record. Our portal posed the same question to the EP Rapporteur for Albania Isabel Santos in last week’s interview.

“Of course, these reforms and the establishment of bodies like the SPAK will give results in the medium and long run. We cannot expect results overnight,” Santos said.

It seems as though many citizens of Albania and the Western Balkans are getting frustrated with waiting for the long-term results for so long. Especially since the dry statistics usually pale in comparison to media reporting on affairs that grab the attention of the public much more easily, such was the case of the demolition of the National Theatre in Tirana last year. In addition, there are assessments that things are actually moving in an opposite direction.

Only yesterday, Transparency International and Institute for Democracy and Mediation released a publication that paints a much bleaker picture of the anti-corruption efforts in Albania, assessing that the state capture in the country has increased significantly between 2008 and 2019, a period encompassing the rule of both the Democratic Party (until 2013) and the Socialist Party.

“The last decade has seen a strengthening of the partnership between politics, business and organised crime which has reached its zenith in the last few years,” read the conclusions of the publication, which analysed “grand corruption cases” and tailor-made laws in recent years.

Crucially, the analysis concluded that these trends continued unabated despite EU-sponsored reforms that sought to establish a professional public administration and an impartial and professional judiciary.

“In the case of judicial reform, its slow pace and the vacuum created by the comprehensive vetting of judges and prosecutors have stalled some investigations and prolonged others”, the publication stressed.

Fight against corruption in the campaign

With the elections less than a month away, it seems that the opposition has quite enough material to campaign on the government’s more than a shaky record on the fight against corruption. Blerjana Bino, Co-Founder of Center Science and Innovation for Development, confirms that this is the case.

“The Democratic Party and other parties on the opposition in their electoral speeches, public appearances, and meetings with constituencies highlight cases of corruption pointing to the Government’s failure to fight small and grand corruption,” says Bino for European Western Balkans.

DP leader and the candidate for Prime Minister Lulzim Basha stated earlier this month that after the April 25 elections, “the real war on crime and corruption will begin”.

“We shall start the real war and the real national effort against corruption, organized crime and traffic of narcotics. For the past 8 years this has not happened,” Basha said at an event that was also attended by the new chairman of the German CDU party, Armin Laschet, who also highlighted corruption as the biggest challenge for Albania.

“According to the DP, once they come to power, they will not allow any offshore operator in tenders, competitions, or concessions. Basha also says that there will be no new public contract for those companies that have not completed 70% of the existing public contract. In their anti-corruption electoral program, the DP plans the set-up of an Anti-Corruption Agency to coordinate efforts to fight corruption and prepare corruption files”, says Blerjana Bino.

On the other hand, she says, anti-corruption is not a prominent narrative of the SP’s electoral narrative.

“Socialist Party’s electoral narrative in Government for eight years now focuses on crisis management (2019 earthquake, COVID-19), vaccines, return to normality in the upcoming months with massive inoculation of population, and attacks on the inability of the opposition to govern,” Bino says.

In a speech that officially launched his bid for the third consecutive term, an elusive feat for his predecessors, Prime Minister Edi Rama somewhat vaguely stressed the value of the reforms that were implemented and the risks of their reversal.

“SP’s mandate makes all the reforms irrevocable; the opposite would mean losing all the efforts and sacrifices we have already made, and it would certainly make Albania return to where it should never return,” stated Rama, also talking about the economic growth and rise of wages.

According to the Executive Director of the Institute for Political Studies from Tirana, Afrim Krasniqi, it is not that the SP is not talking about corruption – the problem is that all parties have an inadequate approach to the issue.

“In the current electoral process everyone is talking about the fight against corruption, but the discourse is wrong in content and in terms of addressing it. In content, because the parties accuse each other of corruption by denying their responsibilities, so they do not see it as it is, a fundamental structural, political and social problem. In terms of addressing it, because for the parties the solution is offered mechanically only if we win, corruption disappears, as well as everyone speaks in the name of a new justice, which will fight all the corrupted people”, he says.

He adds that, due to the fact that the Socialist Party of Prime Minister Rama holds all powers to the central and local government after the opposition’s boycott of the 2019 elections, the majority avoids the anti-corruption debate by explaining it as a social phenomenon and a feature of transition.

“The Democratic Party and its opposition allies are clear when they label senior officials and financial oligarchs as responsible for the state of corruption, but not so clear when they should offer solutions to the problem”, he says.

A weak case for optimism

According to the current polls, SP is in the lead, but the DP and the Socialist Movement for Integration put together, are not that far away. The two opposition parties decided to form a new coalition should they win.

Both of our interlocutors, however, are not optimistic about either electoral outcome in terms of a more effective fight against corruption.

“I believe that the level of corruption in Albania is related to the level of corruption in the political parties themselves, in the vertical and clientelistic system of their activity, with the great influences of the oligarchs on all parties and the media, as well as in the old culture of our justice system of not having impunity, and delays in establishing new justice institutions after the 2016 constitutional reform,” says Afrim Krasniqi.

He assesses that the third term for Prime Minister Rama would be demotivating for the vital need for concrete anti-corruption measures, while a political rotation of recycling former senior officials before 2013 or 2017 would create opportunities for new reforms, but still wouldn’t guarantee that they will focus on serious anti-corruption measures.

Blerjana Bino assesses that any chances of curbing corruption will require a radical transformation of political actors and policy processes, including strengthening checks and balances, limiting the influence of big money and organized crime in politics and ensuring participatory policy development.

“I do not yet see any political actor genuinely committed to these. Most of the time, it is simply an issue of formality and ticking the box”, she says, underlying that she does not see any profound transformation after the general elections of 25 April 2021.

“The Government is becoming even more arrogant and powerful with eight years in power; the opposition does not inspire, and there is no significant third alternative”, she concludes.

The lack of optimism when it comes to the political actors leaves only the international and domestic pressure, including the mobilization of citizens and civic engagement, as the driving force for decreasing the levels of corruption in Albania. In this, the country is, once again, not at all different from the rest of the region. As the collective experience has shown, these pressures can lead to limited results, but only after much more energy and time is spent than if the political elites had been truly focused on the issue.

EWB Interview, Angelina Eichhorst: It is clear that the WB6 are part of Europe