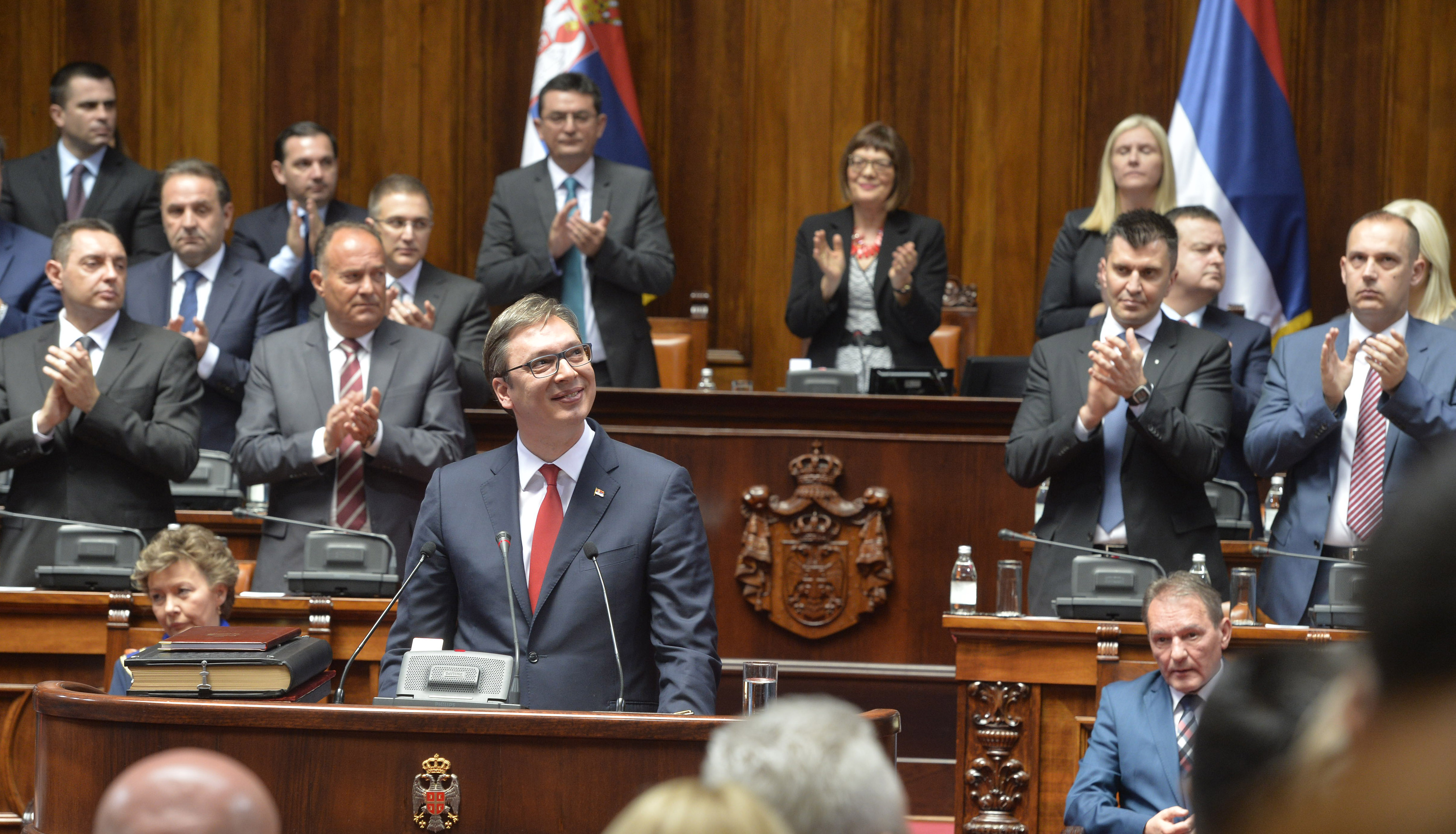 European Parliament’s criticism is not induced by (the issue of) Kosovo, rather that MEPs do not want to see another Orban in the EU. The European Parliament Report on Serbia is therefore comprehensive and highly critical.

To comprehend the nature of power, of governance in Serbia, the democratic backsliding (yes, any progress can become reversible), changes in and to our political culture, European institutions needed time. After all, even Freedom House didn’t categorize our country as a “transitional or hybrid regime” prior to 2019. True to the point, EP “regrets… that there has even been backsliding on issues that are fundamental for EU accession”.

And it is really not about Kosovo. We might be very wrong, but for the EP at least, the time of “buying time” by promising concessions that never materialize may well be over. The 100+ paragraphs raised in the European Parliament’s (EP) report on Serbia present a detailed look into the country’s political reality.

It is also important to note, as criticism ramps up from the ruling coalition, that with this report, the EP has not stepped out of its mandate. For several years now, EP’s presence and contribution to the enlargement policy has been evolving. After the 2019 elections, there is a different EP, with a more prominent role for green and liberal political groupings balancing what has, for years been European People’s Party (EPP) dominance.

A more critical, or perhaps more sober assessment of Serbia’s overall effort and achievements on the proverbial “European path” has been with us since at least 2019 Progress Report. What is new is para 24, and mentioning by name four of the “cases with a high level of public interest” – Krušik, Jovanjica, Telekom Srbija and Savamala (affairs). If Croatia’s experience serves as any example, no country can join the EU without previously resolving cases of such magnitude.

Their mentioning presents public embarrassment for Belgrade, and it is no wonder some effort has been invested in keeping them out of the final version of the document. However, they are not going anywhere; the EP will continue to insist on their timely and complete resolution, as will civil society. And they are all equally important – “unlawful demolition of private property in the Savamala neighborhood”, to which the EP has referred back in 2018 is still part of the reports.

Another (highly critical) paragraph concerns “unacceptable verbal attacks and cases of hate speech” (para 20) against MEPs who have been representing the EP in relations with Serbia, most notably, Ms. Tanja Fajon.

Now leader of Slovenia’s social democrats, she has been the subject of a smear campaign for months –perhaps because she represents an opposing political group; or because she knows the Western Balkans’ context well. With the European Commission (EC) and the EP now poised to monitor decision makers’ narrative as well, future verbal attacks at any of MEPs will be taken most seriously.

A lot has been written, or ascribed to EU’s poor communication; and anti-EU rhetoric employed by decision makers in Serbia. In paras 8 to 10, the report seems to contain a comprehensive realization of this fact and allocates blame accordingly: “public discussion must be based on facts”; “encourages Serbian authorities… to communicate more actively their commitment”; and, most importantly in our view, “expresses concern that publicly financed media outlets, often quoting office-holders, contribute to the dissemination of anti-EU rhetoric in Serbia”.

Writers of the report stopped one step short of mentioning them by name, but this may present an opening into a wider inquiry, one that would produce unpleasant conclusions for public broadcasters, whose airwaves are being dominated by Euro-sceptics and Euro-scepticism.

We also note that in the context of the pandemic, this Eurosceptic content is often intertwined with dangerous, anti-science messaging; it is not uncommon to see anti-vaxxers and conspiracy theorists of all colors in prime-time, confusing and misleading citizens. Even if this is not the fault of public broadcasters, it is aired by media that hold a national frequency.

Particularly revealing are remarks on the “Inter-Party Dialogue” (“on improving the conditions for holding parliamentary elections, facilitated by the EP”). The “IPD” is of utmost importance, being the only maneuver left to put a temporary halt to polarization and political fragmentation. What makes it so revealing is that the EP provides us with a sketch for democratic elections: “IPD should be concluded well in advance of the forthcoming elections (…) “leave sufficient time to implement necessary… changes” (in order to) “create a level playing field”.

This ties in to para 13, where the EP shows it fully understands the reality of 2020 elections in Serbia (“the dominance of the ruling party, including in the media, was of concern; regrets the long-term trends of pressure on voters, media bias and the blurring of lines between the activities of all state officials and partisan campaigning; points out, in this regard, the role of state-sponsored disinformation campaigns aiming to shift opinions vis-à-vis elections”).

And while the EP “regrets the decision by parts of the opposition to boycott the elections”, it also notes that “the newly constituted Serbian Parliament is marked by the overwhelming majority of the ruling coalition and the absence of a viable opposition – a situation which is not conducive to achieving political pluralism in the country” (para 16).

Recent attacks on civil society – KRIK, CRTA, and others – understandably take significant part of EP’s comments on Serbia’s parliament. However, in para 38, it is also noted that National Assembly “met only 44 days after the declaration of the state of emergency in March 2020, which undermined its position as the key institution of parliamentary democracy” and that it “did not begin its work in full for a long period after the declaration of final election result on 5 July 2020, despite a clear parliamentary majority”.

Since the Belgrade-Pristina dialogue has produced no new results – apart in the much-discussed and criticized parallel process led by the US – one remark warns Serbia against moving its embassy to Jerusalem. Given there has been little mention of it in state-run media, moving the embassy now with new administration in D.C. would present a surprise. As expected, full support is extended to Lajcak and his team.

The EP is also at the forefront of criticizing China’s “increasing presence and influence”, first with regard to the “lack of transparency and environmental and social impact assessment of Chinese investments and loans”; then, in the context of Serbia’s foreign policy alignment and its failure to agree to the condemnation of the new security law (para 89; the “Hong Kong national security law”); and lastly Serbia’s “growing dependence” (para 99) on “equipment and technology” for defense and security purposes, “including a mass surveillance system in Belgrade and mass personal data collection without appropriate safeguards”.

There are, however, several other remarks that may not spell China, but are all about it – when referring to “disproportionate visibility given by Serbia to third countries” (para 11) or “high levels of air pollution… in large cities and industrial areas such as Smederevo, Bor and Kolubara” (para 85). (Concern over Russia remains, but is less prominent and nothing new was said.)

The report of the European Parliament is the clearest warning to Belgrade so far, that Brussels is very aware of the reality of the political situation in Serbia and the nature of the ruling regime. It is not clear, however, when and how its key messages will be taken up by decision-makers in the Member States (MS). In this regard, speeches of the ambassadors-representatives of the MS in the EU; envoys for the Western Balkans; and lastly, the Quint should be closely followed.

Further progress in the enlargement has long been conditioned by Chapters 23 and 24; we will see whether the lack of progress in the IPD, one that could be clearly attributed to the authorities, would eventually lead to the suspension of any of the assistance programs, or to negotiations altogether.

There is however still room for Belgrade to avoid such a scenario, but not by giving away further concession on Kosovo (hard to imagine happening before 2022) but by meeting opposition’s conditions for participating in future elections.

Miščević does not see opening of chapters as uncertain

Meta, Yee: Boycott does not lead to way-out