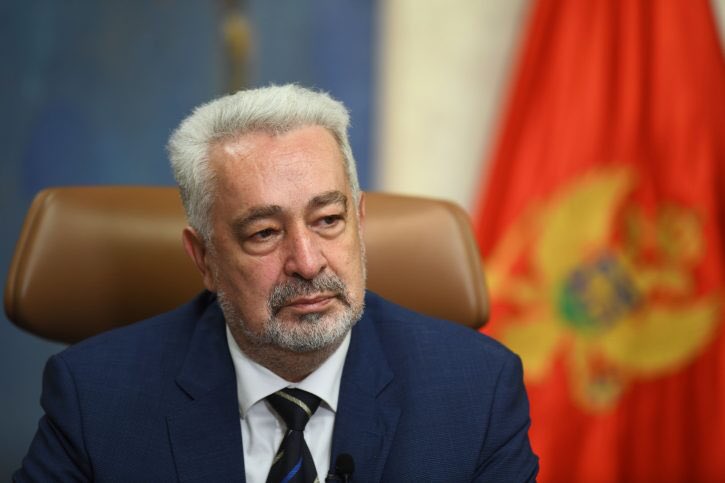 PODGORICA – Prime Minister of Montenegro Zdravko Krivokapić proposed the sacking of Minister of Justice, Human and Minority Rights Vladimir Leposavić on Monday after the Minister expressed doubt about the classification of 1995 Srebrenica massacre as a genocide. Most of the MPs supporting the Government said they would not vote for the dismissal in the Assembly, revealing the fragile relations within the ruling majority.

In a press conference held yesterday, Krivokapić stated that the situation caused by Leposavić was an “attempt to topple the Government from inside”, accusing the opposition Democratic Party of Socialists (DPS) but also “many representatives of the ruling parties”, Vijesti reported.

Krivokapić denied that the decision was a result of a diplomatic pressure. According to Vijesti, the Prime Minister asked the Minister of Justice to resign and offered him a position of an Ambassador, but Leposavić refused it.

The Government is supported by the minimal majority of 41 out of 81 MPs, most of whom have already declared they would vote against the dismissal.

Leaders of the pro-Serbian Democratic Front (DF), which has 16 MPs, announced that they do not support Leposavić’s dismissal. Milan Knežević, one of the leading DF members, said that the situation showed the crisis of the Government and that Prime Minister Krivokapić was the one working against it.

Socialist People’s Party (5 MPs) and an independent MP Marko Milačić, who also support the Government, said they would not support Leposavić’s dismissal either.

The Democrats, party led by Speaker of the Assembly Aleksa Bečić, also announced that it would not support the dismissal if there is no agreement within the ruling majority. The party will not vote together with DPS to dismiss the Minister, its MP Boris Bogdanović said, at the same time condemning Leposavić’s comments.

Democratic Party of Socialists and URA, member of the ruling majority, have still not explicitly announced their positions. Should the Minister be dismissed with the votes of the opposition and only a handful of ruling MPs, which now seems to be the only option for the dismissal to succeed, it would significantly shake the position of the Government.

Officials of Serbia, including President Aleksandar Vučić, have already expressed their views of Krivokapić’s decision, assessing it negatively.

Speaking for pro-government television Pink last night, Vučić said that it was more important to them (Montenegrin Government) that people in Brussels and State Department, rather than Belgrade, are “ecstatic”. He also said he would not interfere in the internal issues and stressed that it was the choice of the Government.

Leposavić argued last month that the UN war crimes tribunal in The Hague, which classified the massacres of Bosniaks from Srebrenica as genocide, had no legitimacy because he claimed it had destroyed evidence about the trafficking of the organs of Serb civilians in Kosovo, Balkan Insight reports.

But shortly after his comments were reported, he issued a statement saying that he did not deny the Srebrenica genocide and would not resign. Opposition parties and one civic initiative launched an online petition for Leposavić’s resignation, arguing that his statement undermined the international reputation of Montenegro.

The comments were condemned by the EU.

Leposavić was also criticised, as the Minister of Justice, by the Prime Minister over the set of prosecutorial laws that the ruling majority submitted in February, which were then criticised by both the EU and the opposition and withdrawn from the procedure. DF leader Milan Knežević announced that there will be progress with the laws next week.