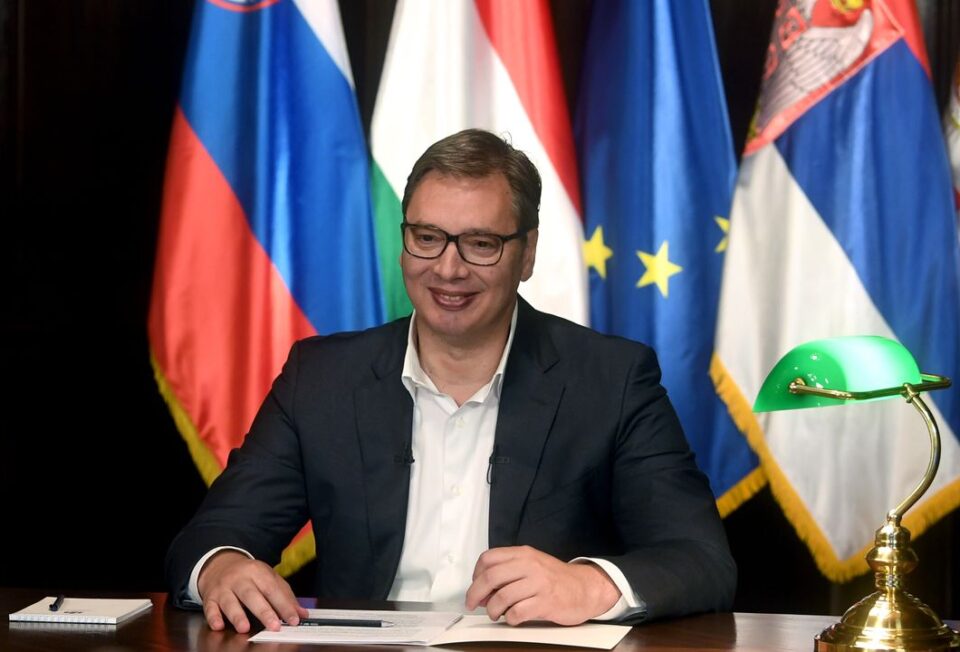 BELGRADE – Statements and press releases of Serbian President Aleksandar Vučić were the main source of media headlines when it came to events and the relationship between the European Union and Serbia, which made him the main creator of narratives about the European Union, according to the latest publication by the Centre for Contemporary Politics “Media Reporting in Serbia on the European Union 2020: Love from China and Slaps from Brussels”.

It is stated that the pro-government media did not search for information outside official institutions, so the main source of information was the President of Serbia Aleksandar Vučić, and the role of Aleksandar Vučić as the main source of information and as the creator of the narrative about the European Union was most noticeable when it came to the assistance that arrived in Serbia intended for the fight against the COVID-19 pandemic.

Zoran Gavrilović, director of the Bureau for Social Research (BIRODI), pointed out for EWB that this finding supports the thesis of what the function of the media is in Serbia and who has control over them – they are a means of promotion and propaganda of Aleksandar Vučić, i.e. a means of revenge against those who criticize the President of the Republic.

“This is already a clear trend since 2016. BIRODI media monitoring shows that this is especially true for televisions with a national frequency that dominate the formation of public opinion, because it informs more than 60% of citizens, especially the part of the population that went to the polls,” said Gavrilović.

He added that the essence of creating public opinion is in the fact that the President of Serbia imposes topics and discourses through the media, i.e. narratives in accordance with his political needs, which he comes to through public opinion research.

“Another reason why Vučić is the main creator of the narrative about the EU is the collapse of the negotiating team, because the team has not had a leader for two years, Minister of European Integration of Serbia Jadranka Joksimović decided to keep quiet in the media, and not to be a leader and promoter of EU integration,” explained Gavrilović.

Researcher at the Belgrade Centre for Security Policy (BCSP) and coordinator at the prEUgovor coalition, Jelena Pejić Nikić stated that the President of Serbia and the ruling parties are in the center of political power and media attention, so this finding of the publication is not at all surprising.

“The president could respond to criticisms such as his excessive appearance in the media with a goal of promoting of his own party ahead of parliamentary elections in which he does not personally run, or the very poor practice of him and other politicians to comment on trials and publish information from investigations. On the other hand, it is the Government that is leading the accession process and which should analyze the findings and take political responsibility for the bad assessments from the report,” Pejić Nikić pointed out.

She added that we should hear about Serbia’s European integration from EU officials and representatives of various EU institutions, from the Minister for European Integration and other ministries and institutions that (should) implement reforms on the road to the EU,  most often with the funds provided by the EU.

“The voice of experts from the negotiating team, from civil society, who are closely following the reforms, which in many important areas have twisted into their opposite – setbacks, should be heard more,” Pejić Nikić emphasized.

Different narratives about the EU and China

The publication states that the headlines that marked the news about the donations and aid of the European Union were moderate and can be summarized as giving general information, while on the other hand, the sources, narratives and even sentiments were completely different when the aid arrived from China.

“When all this is taken into account, it can be concluded that the main reason for the differences between the narratives about EU aid and aid from China were the appearances and statements of President Vučić. Only when these differences became noticeable in official Brussels and when negative reactions followed, gratitude for the help that the EU provided to Serbia became more present in the media, so President Vučić gave more statements,” the publication reads, while it is added that the media closely followed the statements of President Vučić on other topics related to the European Union.

The publication shows that this is the case with informing citizens about the European Union’s reports on Serbia, where “pro-government media appear in the role of transmitters of the interpretation of state officials, most often the President of Serbia, which made him the main source and interpreter of information of the report itself.”

Gavrilović states that this is another finding that speaks about the nature of the work of the media in Serbia.

“Instead of holding the government responsible and being the guardians of the public interest, and EU integration implies that, the pro-government media have the function of a fig leaf, covering up what EU actors are saying about the situation in Serbia. It should be reminded that this government came to power on a wave of 24 cases of corruption, which the EU insisted on. It would be worthwhile for this government to learn a lesson and not turn its head away from the cases that the European Commission and the European Parliament point out to,” Gavrilović stated.

He added that EU integration is impossible to postpone, but it is possible to “crash”.

Pejić Nikić pointed out that the publication’s finding which indicates that the pro-government media see the meetings of statesmen of the region and the EU only through the prism of glorifying the President of Serbia and strengthening the narrative that Vučić is in the company of the powerful, defending Serbia from the EU – is very interesting.

“It is good to follow the meetings of statesmen, to show the political and not only the technical side of the process, but the focus should not be one-sided and out of context, in the service of dominant narratives in favor of capturing the state instead of promoting European integration,” she concluded.

The research analysed the question of which topics are playing the central role in the media coverage of the EU, as well as the question on their content and dominant narratives. The research included the analysis of 18 web pages of media outlets, the ones with the highest readership and the others that have a significant impact on public discourse. The research covered the period from January 1 to October 31, 2020.

Blinken: Kosovo should engage in dialogue with Serbia without delay