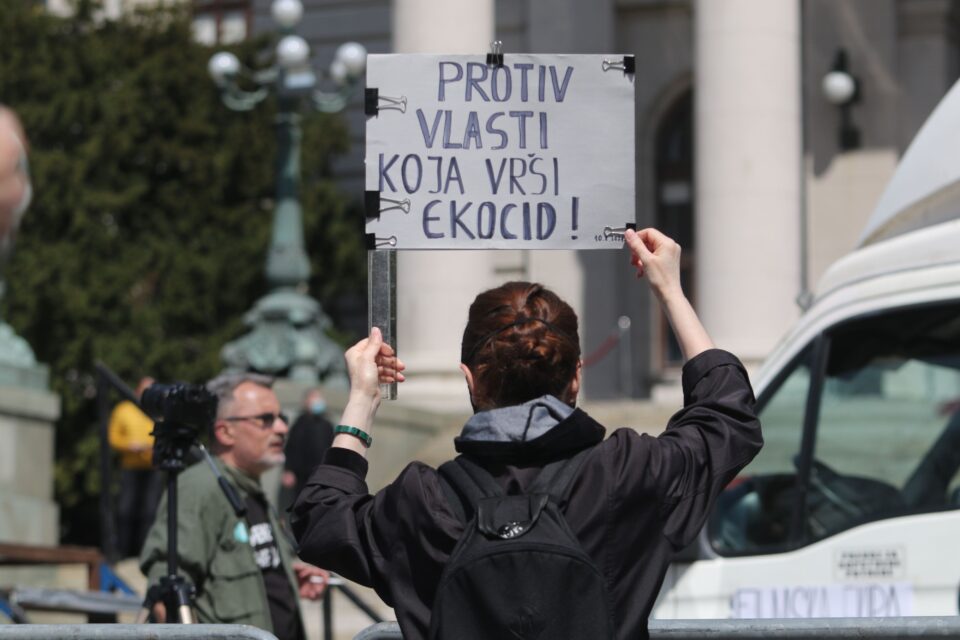 BELGRADE – Several thousand people protested in front of the Serbian parliament on Saturday against the lack of government action to prevent water, land and air pollution by industries such as the mining sector. The protest was organised by environmental activists.

The organisers dubbed the protest “Ecological Uprising”. They demanded the introduction of a moratorium on the construction of small hydroelectric power plants, the suspension of deforestation in Serbia, as well a more intensive afforestation, N1 reported.

They called for an end to the misuse of money for ecology, for authorities to stop ignoring environmental impact studies, such as the construction of mini-hydropower plants on the environment, and for citizens to be better informed about environmental issues.

The organisers also demanded respect for the Constitution and the law, including the right to a healthy environment, as well as the removal of those in charge in that area due to harmful acts and omissions.

During the protest walk through the central city streets, the citizens stopped at the representative office of the company Rio Tinto, which they accused of threatening the environment in western Serbia, and in front of the building Serbian Radio and Television.

Prime Minister of Serbia Ana Brnabić said that there were many speakers who politicized the event.

She stated that the gathering was an example of “disrespect and irresponsibility“, because most people were without protective masks.

She mentioned that ecology is an “extremely important” topic and that it shows how much Serbia has changed.

“This topic shows that jobs and pensions are no longer a priority in Serbia because when you start dealing with the environment, those are the problems of the first world”, said the Prime Minister of Serbia.

Don’t Let Belgrade D(r)own (NDMBG) and Enough was Enough (DJB) were among the few opposition organisations in Serbia which invited their supporters to attend the protest.

Minister: Environmental problems are nothing new, there is no instant solution

Serbian Environmental Protection Minister Irena Vujović stated that environmental problems in Serbia did not arise overnight and therefore there is no instant solution, but that the ministry and other competent departments in the Government are dedicated to finding a solution – responsibly and transparently, adding that first results are expected this year.

Vujović stated that it is positive that there is an increasing degree of awareness about the necessity of environmental protection, which was not the case in previous years, the Ministry announced.

She said that “this year will be marked by the largest investments in this area yet, which will significantly change the ecological image of Serbia.“

All the issues, from air quality, illegal and unsanitary landfills, nature protection, but also the lack of infrastructure, primarily the sewerage network and wastewater treatment plants, have existed for decades and they will be resolved much faster in time to come, the Ministry added.

„This year, we are embarking on large investments, because we are strongly determined to solve the decades-old problems we have in this area. We will implement projects for improved air quality, and we will also systematically solve the problem of illegal landfills. We will also build eight new regional waste management centres, which will cover more than 50 cities and municipalities. Large investments will also be made in the construction of wastewater treatment plants and sewage networks,“ announced Minister Vujović.

Reynders: Digital Green Certificates for travel should be extended to third-country nationals

Hoxha with McAllister: Kosovo is part of the European perspective of Western Balkans