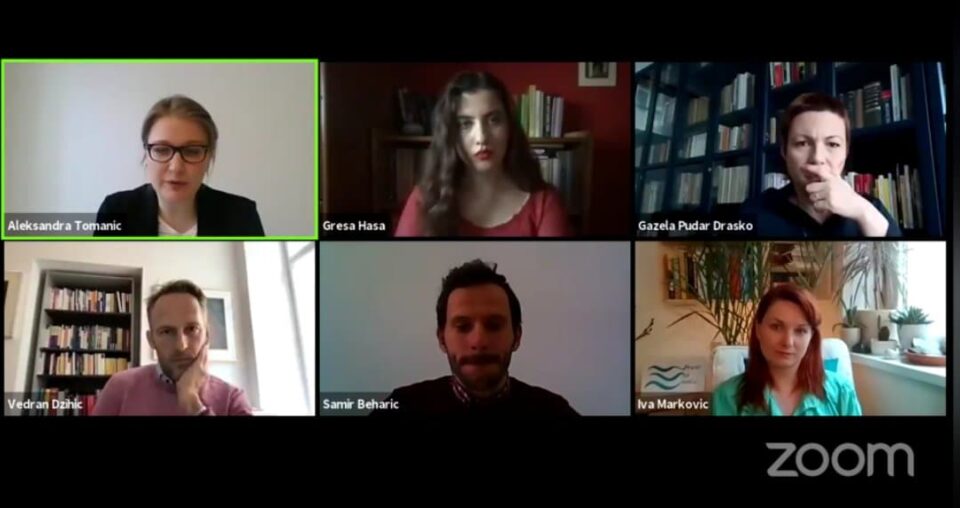 The first public discussion and presentation of the initiative, "Lighting up the Western Balkans: Why democratic change will come only through citizens"; Photo: Screenshot

WESTERN BALKANS – “The bottom-up approach is the best way to activate and motivate the citizens and the most effective way to make a change,” it is concluded at the first public discussion and presentation of the initiative, “Lighting up the Western Balkans: Why democratic change will come only through citizens”.

The first public event, organized as part of the Engaged Democracy Initiative (EDI) process, that took place on Thursday, 15 April, presented the aim of EDI.

Its goal is to involve local movements and organizations, researchers, social businesses, engaged citizens and journalists in a hierarchless and horizontal regional network (rhizome) for supporting, promoting and pursuing values of open and democratic societies across our region.

Aleksandra Tomanić, Executive Director of the European Fund for the Balkans points out that the goal of EDI – connecting a local with regional initiatives, is not an easy goal. Therefore, as she says, the purpose of EDI is to provide a structure.

“With EDI, we are building on existing regional solidarity that is there despite the decades that politicians have tried to ruin it. The solidarity is mainly shown in disasters times, and we are looking to find ways to transpose this solidarity into disaster-free times,” Tomanić says.

She explains that no process or perspective will make societies automatically democratic, adding that EDI is an ambitious task.

Vedran Džihić, Executive Board of the Institute for Democratic Engagement Southeast Europe, highlights that the point of the EDI is to look towards the places where there are energies, fights and struggles.

But why democratic change needs to come bottom-up and why is it the best way?

Samir Beharić from the Center for Education and Socializing Jajce in Bosnia and Herzegovina explains that the bottom-up engagement is maybe not the only way how to deal with issues on the ground, but it is one of the best ways.

He explains that the bottom-up approach teaches young people that change throughout their action on the local ground is possible, but not only possible – it teaches them critical thinking.

He adds that this is one of the reasons why the bottom-up approach is the best way to activate and motivate the citizens.

“My experience shows that the most effective way to make a change is to have locally-owned initiatives. Young people should rock the boat, question everything and have a say to move the democratic process forward,“ explains Begarić.

However, the COVID-19 pandemic has brought certain struggles to the regional initiatives.

Iva Marković, from the Right to Water, Serbia, explains that pandemic times are pushing initiatives and local movements to explore all the other ways of approaching and connecting with people, and teaches them to find ways of building trust without physical contact, which is, as she explains, almost impossible.

“What made the trust between people is a direct and spontaneous contact, through which you share the values. Pandemic is not only preventing circulation of people, but it is also filtering who is moving around,” notes Marković.

On top of this, people from the Western Balkans became more sceptical. She explains that in the region, people have lost their trust in institutions – state institutions, as well as the informal institution.

“When someone shows up, raising their voice and rocking the boat, we become suspicious – who are they, what are their intentions,” says Marković, explaining that scepticism is a prevailing problem in the Western Balkans.

However, as the biggest challenge, she sees building an affirmative narrative.

“We are always defending the rights or fighting for something. There is always this defensive position. Transforming that into an affirmative narrative would be the next step, especially for the environmental cause. We have the ideal and the story on how do we want things to look. We do not want only to defend those ideals but to promote them,” says Marković.

Gresa Hasa, Co-founder of the Shota magazine in Albania, explains that another world is possible, but it has to be feminists.

“The only promise for us to go towards an equal and just society will be through feminism. There cannot be radical social change without the involvement of women, Roma or LGBTI+, because real change can only happen from bottom-up, and they are right there, at the bottom,” she says.

To do that, Hasa believes that the first step would be thorough communication.

That communication is crucial when it comes to connecting initiatives thorough the region, agrees with Beharić, explaining that without the international community and the media, the case with the segregated schools in Bosnian and Herzegovina would have never be won.

“That support was necessary for spreading the message and raising the awareness through the different channels,” he concludes.