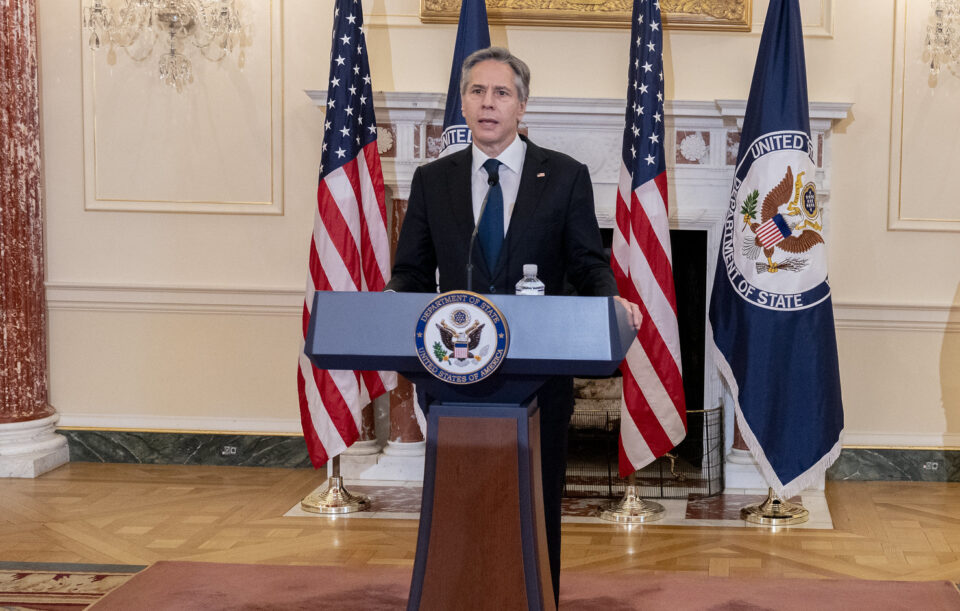 Recent letters of the new Secretary of State of the United States Antony Blinken to the President of Serbia, Prime Minister of Kosovo and Presidency of Bosnia and Herzegovina have been the first signals of the American foreign policy in the region following the change of administration in Washington. In the case of Belgrade-Pristina Dialogue, the US has handed over the reins to Brussels once again, while in BiH it supported limited and step-by-step political reforms.

“The United States’ long standing goal has been to see Serbia and Kosovo reach a comprehensive agreement on mutual recognition. This will require flexibility, forward thinking and a willingness of all sides to compromise”, Secretary Blinken wrote in his letter to President of Serbia Aleksandar Vučić, released recently by the pro-government media in Serbia, which mostly focused on the fact that Blinken wrote a postscript by hand,  saying that he remembered “good conversations” with Vučić and “looked forward to renewing them”.

While most of the interlocutors of Danas daily assessed that Blinken’s handwritten message was little more than a diplomatic curtesy, it also reminded of the fact that Blinken and Vučić know each other from the time of the second Obama administration, in which Blinken served as the Deputy Secretary of State. Just like in their 2016 conversation, following the visit of then Vice President Joe Biden to Belgrade, Blinken supported Serbia on its path to EU membership in this letter.

He did the same thing in the letter to the Kosovo Prime Minister Albin Kurti, urging him to engage in the “US-supported EU-facilitated Dialogue with Serbia” in a letter Kurti’s Office released last week. Securing a comprehensive normalisation agreement with Serbia centered on mutual recognition, Blinken wrote, is essential to Kosovo’s ability to move forward on its EU accession path.

There are no signs of the new administration wanting to run any negotiating process parallel to the Brussels-mediated Dialogue, which was the case in 2020, when Vučić and then Prime Minister of Kosovo Avdullah Hoti signed a series of pledges in the Oval Office. They have so far mostly resulted in Isreal recognising Kosovo, with Pristina opening its Embassy in Jerusalem.

“In my understanding, the letters are a clear signal the Biden administration ended the Trump-Grenell policy of undermining the EU on its own turf. A return to transatlantic cooperation, but with Washington leaving the lead role to the EU”, says Bodo Weber,  Senior Associate of the Democratization Policy Council, referring to the last year’s efforts of former US Ambassador to Berlin and Special Envoy for the Belgrade-Pristina Dialogue, Richard Grenell.

The first sign that Washington is once again ready to cooperate with the EU rather than compete with it, which is how Trump’s moves were seen by some analysts, was the January phone call between President Biden and Chancellor Angela Merkel, in which the Western Balkans was explicitly named as one of the common foreign policy priorities. Apart from Kosovo, it is often stressed that Bosnia and Herzegovina is the second “unresolved issue” in the region, which became even more evident this week, when the alleged Slovenian proposal for the country’s dissolution reached the public.

Secretary Blinken’s letter to the Presidency of BiH, sent in March, does not fit the narrative of a need for a change of borders, but rather of reforms to make Bosnia and Herzegovina more functional. Blinken reminded that the US “remains the closest friend and the strongest supporter” of the country.

He called for “limited but significant constitutional, electoral, legal and economic reforms”, so that the institutions of the countries will be strengthened. In particular, Blinken called for a constitutional reform so that the ruling of the European Court for Human Rights in the case Sejdić-Finci could be implemented. More than ten years ago, the Court ruled that the electoral system was discriminatory, preventing anybody not identifying as Bosniak, Croat or Serb  from standing for election to the Presidency and the House of the Peoples.

Somewhat controversially for the supporters of more robust constitutional reforms, Blinken explicitelly assessed that the previous reform efforts failed because they had tried to achieve to many things at the same time, and that limited, step-by-step reforms would do the trick. This point of view was welcomed by the Serb Presidency Member Milorad Dodik, who was quick to point out that there was no call for so-called “Dayton II”, which is how some call a step towards a significant centralisation of the country.

Bodo Weber reads the letters to, on the one side, Belgrade and Pristina and, on the other, to Sarajevo, differently.

“On Kosovo-Serbia, the letters stress the sovereignty and territorial integrity of Kosovo, and the recognition of Kosovo by Serbia as the key element of a solution to the status dispute in the negotiations on a final, comprehensive agreement. This way, the US returns to the principles that made up the original framework of the political dialogue, in line with the EU, that is its most important actor, Germany”, Weber says.

On Bosnia, however, the letter seems to breath the spirit of the Trump administration, he interprets, seeing the proposal for a limited reforms in the fields of election rights as a continuation of this approach.

“It is aiming at any deal that can be agreed with local nationalist leaders, at the price of de facto serving those nationalist agendas, leading towards further ethnic or even ethnoterritorial division, in collision with official EU and US policy”, Weber says.

He sees the June 2020 Mostar deal, which enabled the holding of the first local elections in that city since 2008, as a part of that approach, which now also includes the negotiations on so-call election law reform, including limited constitutional reform.

“It seems like the Biden administration has not yet settled on its future Bosnia policy, as the Blinken letter fails to reflect that dangerous reality”, Weber concludes.

The letters still come at an early phase of the Biden’s term, which was not the case with his predecessor, who seemed to intensify his efforts as the elections drew nearer. For Politika daily journalist Boško Jakšić, this is a sign of increased US engagement in the region.

“Through tripartite diplomacy, Secretary Blinken made it known that the United States intends to intensify its engagement in order to resolve the dispute over Kosovo, and finally bring BiH out of a state of political paralysis. It remains unclear how Belgrade and Pristina will interpret his call for “flexibility”, while the demand for limited constitutional changes in BiH is a welcome announcement of the necessary reforms of a fossilized system. The “offensive” on three fronts confirms that the United States wants to be present in the Western Balkans and not to leave the region to Russia and China”, Jakšić says for EWB.

The next phase EU-mediated Dialogue is expected in May, as announced by President Vučić, but there are still no signs of a serious breakthrough. On the other hand, the reform process in BiH does not seem to be accelerating, with the country bound to be focused on the alleged proposals for its dissolution apparently coming from the parts of the EU. US is yet to demonstrate that it can move the processes further