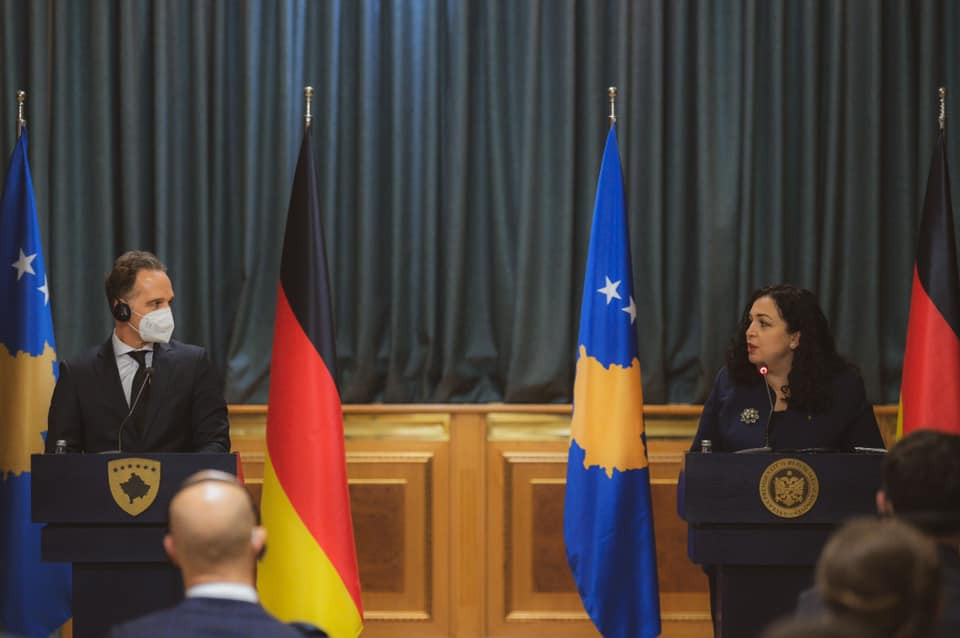 PRISTINA – Recognition of Kosovo from Serbia will be one of the elements of the Belgrade – Pristina dialogue said German Foreign Minister Heiko Mass, adding that compromises are needed to reach a final solution, Gazeta Express reported.

“Of course, recognition of Kosovo will be one of the elements of a solution. It is normal to have compromises in dialogue on normalization”, Maas said during his official visit to Pristina.

German Minister said that redrawing borders in Western Balkans “belongs to the past” adding that Germany opposes such ideas.

According to Maas, the change of borders idea is dangerous and unrealistic.

“I want to emphasize that ideas on drawing lines in maps we consider as unrealistic and very dangerous”, Heiko Maas told during a joint press conference with Kosovo President Vjosa Osmani.

He emphasized that the EU should fulfil its promises and wave visas for Kosovo citizens.

According to him, Germany supports Kosovo-Serbia Dialogue facilitated by the EU Special Representative Miroslav Lajčak.

“One of the obstacles for the regional development in bilateral relations between Kosovo and Serbia and I have emphasized unreserved support for the dialogue on normalization between Kosovo and Serbia, facilitated by the EU. I have heard about topics that are important for people in Kosovo and I will forward these to Lajčak. The new Government has an ambitious program on fighting organized crime and corruption which are in accordance with the expectations of the citizens of Kosovo. I assure you that Germany is beside you”, Maas said.

Kosovo President Vjosa Osmani stressed that the Dialogue between Kosovo and Serbia needs a reset, and Pristina will not enter adventures about changing borders.

According to Osmani, Kosovo institutions are reviewing all agreements reached in the dialogue with Serbia and she expects the dialogue to be concluded with mutual recognition.

Foreign Minister Maas is visiting Kosovo and Serbia today and tomorrow. His talks will focus on rapprochement between the two states, as well as on cross-border cooperation in the fight against the COVID-19 pandemic and its economic and social consequences.