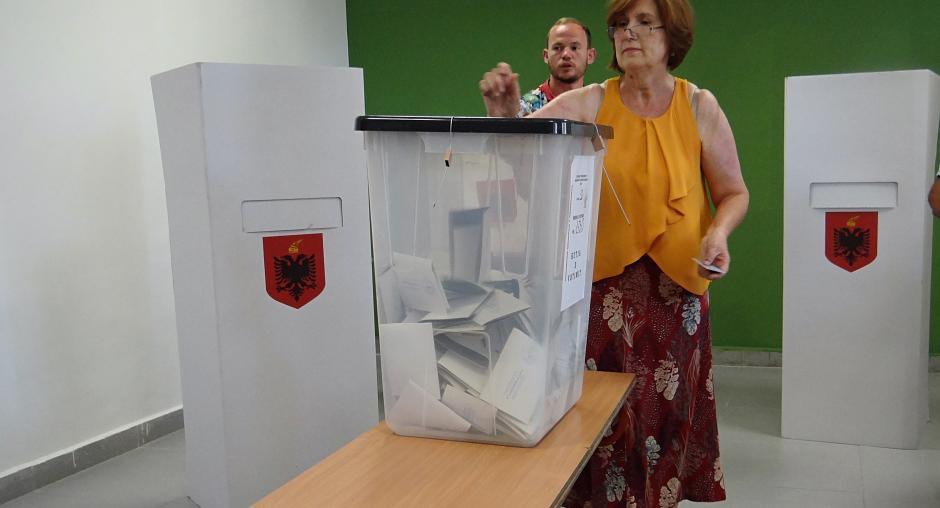 The tensions on the political scene in Albania have reached their pinnacle this week, as the campaign for the elections on 25 April wrapped up.

On 21 April, a local politician from the ruling Socialist Party was killed in the town of Elbasan in an armed clash between supporters of rival parties in Albania’s election campaign.

“Taulant Balla, head of the ruling Socialists’ parliamentary group, blamed the opposition centre-right Democratic Party for the fatal clash. He claimed the opposition sent an armed paramilitary group to the town. Gazment Bardhi, Secretary General of the Democrats, said the clash occurred after a team from his party came across a group of people distributing cash and collecting ID Cards”, Balkan Insight reported.

Earlier in the week, a young man was shot in his knee inside the electoral office of the opposition Democratic Party in the central Albania town of Kavaja.

In the wake of these events, the US and EU ambassadors appealed for a peaceful electoral process on 25 April. Chairmen and Ranking Members of both US Senate and US House of Representatives Foreign Affairs Committees released statements, urging authorities to ensure that voters are able to cast their ballots free from bribery, intimidation, and violence.

US Ambassador to Albania Yuri Kim assessed this to be “an extraordinary show of support for democracy in Albania”.

In an extraordinary show of support for democracy in 🇦🇱, the leaders of both 🇺🇸 House & Senate committees responsible for foreign relations have issued statements (one yesterday, one today) regarding 4/25 elections. Albania’s friends in Washington are with you as you vote!

The elections on April 25 come after a long period of political tensions and instability, marked by the decision of almost all opposition MPs to give up their seats in the parliament in 2019 amid anti-government protests, which were followed by the boycott of the local elections. This election campaign, in which all relevant political actors are participating, was supposed to be a step towards a normalisation of the political climate in the country.

According to Gerta Meta, Executive Director of Society for Democratic Culture in Albania, voter expectations have generally not been met as it has been a tense campaign with cases of extreme clashes on the ground, such as those in Kavaja and Elbasan.

“It is alarming to observe this aggressiveness, when voters expected to hear clear, accurate and understandable statements from politicians. The politicians choose this aggressive tone on purpose, as they have no real arguments to put forward. The campaign discourse is deepening the polarization of the public”, Meta says for European Western Balkans.

Erjon Tase, Executive Director of the Academy of Political Studies, stresses that elections in Albania continue to be held in a climate of political standoff and polarisation which undermine public confidence in the legitimacy of their votes.

“The recent incidents this week are a warning of the tensions that exist between those who have intensified after eight years in power and an impatience the opposition to return to power”, he says.

OSCE Office for Democratic Institutions and Human Rights (ODIHR) also noted the “atmosphere of political volatility and deep mistrust between the major political forces” in its interim report released two weeks ago, before the most notable cases of violence had even taken place.

A test for the level of democracy

ODIHR interim report also emphasised that the conduct of these elections is widely viewed as a test of Albania’s democratic progress in the ongoing accession talks with the European Union.

“In March 2020, the Council of the European Union opened accession negotiations with Albania. Nevertheless, it introduced further conditionality by requiring additional institutional reform, including the implementation of ODIHR election related recommendations, before Albania would be granted its first Inter-Governmental Conference, a key step in continuing the process”, the report reads.

On 5 June 2020, the ruling and opposition parties reached an agreement on limited reforms to the Electoral Code, mostly on “technical issues” such as the composition of the Central Electoral Commission, electronic voting and party financing.

However, the ruling Socialists then went on to unilaterally change some elements of the electoral system, including the way in which coalitions are registered, which some interpreted as tempering with the rules in favour of the ruling party. The Venice Commission and ODIHR described the process as “extremely hasty”, and preceded by a due consultations.

Even without the electoral violence, it is not a given that Albania will “pass the test”. Reports on the vote buying, which became a hotly contested issue in the wake of 2017 elections, have resurfaced once again, though its scope remains unclear.

Media reporting, one of the main issues with the election campaigns across the Western Balkans, was criticised by the ODIHR report.

Our interlocutors also point out at some other potential shortcomings of the campaign.

“Based on the monitoring of the implementation of the provisions of Electoral Code related the use of public resources, conducted by the Academy of Political Studies, it is noted that the ministers, elected local leaders and directors of public entities have continued to focus the electoral campaign on the promotion of the investments of infrastructure, reconstruction of buildings damaged by the 2019 earthquake”, Erjon Tase says for EWB.

And the interim Report released by the Society for Democratic Culture stresses that the implementation of the provisions of the Electoral Code on the control of prohibited activities of central and local officials the whole electoral process risks of becoming an “mission impossible”.

The jury is still out on whether the “test” will be passed, which, in the end, is a political assessment. The participants, however, seem to have provided arguments for those who would argue that the progress has been insufficient.

An unprecedented third term for the Socialist Party?

Currently, most of the polls are showing the Socialist Party, headed by Prime Minister Rama, ahead of the coalition led by the Democratic Party, though the difference has been in single digits for weeks, and enters the margin of error if the opposition Socialist Movement for Integration (SMI) is also included in the opposition’s tally.

Rama could realistically retain the office of the Prime Minister, which would make him the only person to win three consecutive elections in Albania since the fall of the communist regime. Democratic Party would, in this scenario, extend its stint in the opposition to 12 years in total.

“After staying in opposition for eight years, and recently outside of parliament and local government, the opposition is certainly hungry to return to power. That is why there is a lot of impatience from her and at the same time commitment to ensure a victory”, says Erjon Tase.

Asked whether this means that the results will be smoothly accepted by all sides, he says that it certainly depends on the way the election process will take place and the further decision-making of the CEC and other judicial structures.

“For the good of the country and the European integration process, I would very much like to see, like many other Albanians, an acceptance of the result by all parties and cooperation towards any for any government that will come out of the election”, he concludes.

Gerta Meta says that contesting the election result in Albania is a negative precedent in the history of electoral processes due to the lack of prudence and responsibility of the political class.

“The agreement and acceptance of the election result between the electoral subjects is a guarantee for the development and consolidation of democratic institutions as well as for the achievement of a political consensus to successfully finalize the justice and electoral reform”, she stresses.

The voting on Sunday and the following days will show whether Albania, despite the questionable results in the first part of the “test for democracy”, can at least stick the landing.

Fajon: Electoral conditions in Serbia must be equal for all