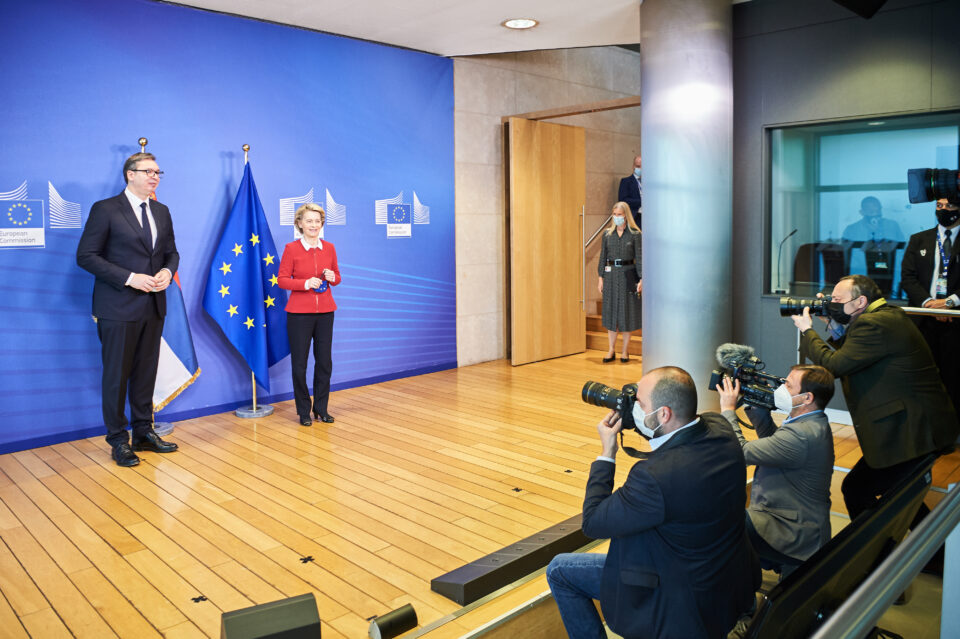 BRUSSELS – President of European Commission Ursula von der Leyen and High Representative of the EU Josep Borrell called for positive developments in the rule of law reforms in order for Serbia’s EU accession to be furthered. Other topics included the Belgrade-Pristina Dialogue, fight against COVID-19 and infrastructure projects, which were especially emphasised by President Vučić.

Following the meeting with Vučić, von der Leyen tweeted that they had discussed fight against COVID-19, economic recovery, accession process, where the EU needs to continue to see positive developments in rule of law, Belgrade-Pristina dialogue, as well as Belgrade-North Macedonia railway, which the EU is ready to support.

Glad to meet @predsednikrs. We discussed:

• Fight against #COVID19
• Economic recovery
• Accession process where we need to continue to see positive developments in Rule of Law
• Belgrade-Pristina dialogue
• Belgrade-North Macedonia railway which we are ready to support pic.twitter.com/Hi4i6Mol9V

High Representative Josep Borrell also emphasised the significance of rule of law reforms, during his press conference with Vučić.

“We discussed several important issues in the accession negotiations, which must be more dynamic, but this can only happen if we make greater progress on reforms, i.e. their implementation, and I stressed to President Vučić that the EU expects Serbia to fulfill the reform agenda, especially on the rule of law and freedom of the media”, Borrell said, N1 reports.

He also commented on the proposal for the traffic connections between Serbia and North Macedonia.

“Today, there is one specific program to which President Vučić attaches great importance, for good reasons, it is the Corridor to the border with North Macedonia. Greece also said that it is ready to support that, and I think that is good news, and I welcome President Vučić’s decision to work with the EU on this important project”, Borrell stated.

Vučić said that Serbia, together with the EU, will build high-speed railways between Belgrade and Niš, but also from Niš, through Leksovac, Vranje, Preševo (cities in southern Serbia) to the border with North Macedonia. He said that this had been one of his best visits to Brussels, announced much better results in the implementation of reforms and expressed expectation that the EU would have a fair and impartial approach towards Serbia.

Belgrade-Pristina Dialogue was also one of the topics of the meetings, and Vučić said that Serbia wanted to be constructive and create an atmosphere for a compromise.

Last night, Vučić met with the Special Representative for Belgrade-Pristina Dialogue Miroslav Lajčak, whom he informed that Serbia would attend the next meeting in the context of the Dialogue once it gets the invitation. Prime Minister of Kosovo Albin Kurti is scheduled to visit Brussels on Thursday.

“Discussed acceleration of accession negotiations with Serbia, based on solid progress on EU reform agenda. Looking forward to the next Inter Governmental Conference in June”, Várhelyi wrote on Twitter.

Vučić is also scheduled to meet with the European Council President Charles Michel this evening.