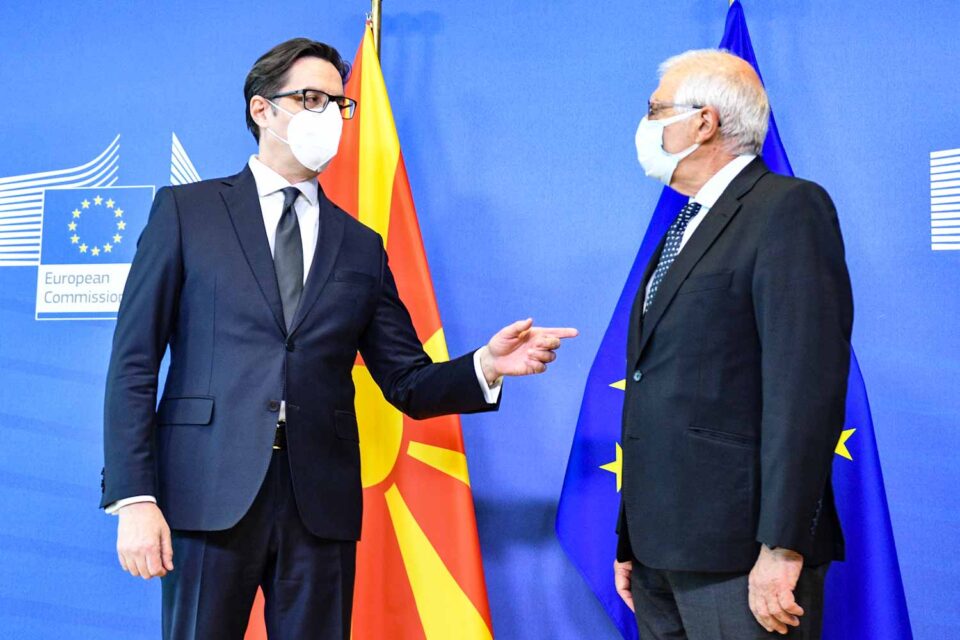 BRUSSELS – President of North Macedonia Stevo Pendarovski met with the EU officials in charge of the Western Balkans today, stressing the importance of his country’s advancing to the next phase of accession negotiations, which includes the adoption of the Negotiating Framework by the Council and holding the first Intergovernmental Conference.

Pendarovski’s visit comes the day after the visit of President of Serbia Aleksandar Vučić, who also met with the EU’s highest officials. Prime Minister of Kosovo Albin Kurti is also scheduled to visit Brussels on Thursday.

At the meeting with the Commissioner for Neighborhood Policy and Enlargement Negotiations Olivér Várhelyi, Pendarovski discussed the possibilities for North Macedonia to move forward in European integration, in the context of the upcoming meetings within the European Union to be held in May and June this year, as well as bilateral issues related to good neighborly relations, reads the press release. At the meeting, opinions were also exchanged on overcoming the problems with Bulgaria. Pendarovski and Várhelyi stressed the importance of holding an Intergovernmental Conference soon.

At the meeting with the High Representative Josep Borrell, Pendarovski welcomed the solidarity of the European Union during the COVID-19 and thanked for the overall support and assistance in dealing with the pandemic, and expressed the expectation that by the end of August, the vaccines that North Macedonia should receive through the mechanisms within the Union will arrive.

Pendarovski also met the President of the European Parliament, David Sassoli. They stressed the “extremely important continuous communication of institutions of North Macedonia with the European Parliament, which lays a solid foundation for significant progress in the implementation of the Stabilization and Association Agreement, as well as the process of integration and accession to the European Union”, the press release reads.

Expressing satisfaction with the strong and principled support of the EP in that direction, President Pendarovski stressed that the adoption of the negotiating framework and the holding of the first Intergovernmental Conference in the near future, is his country’s key priority.

Borrell and Várhelyi on elections in Albania: Political forces to respect the outcome, investigate irregularities