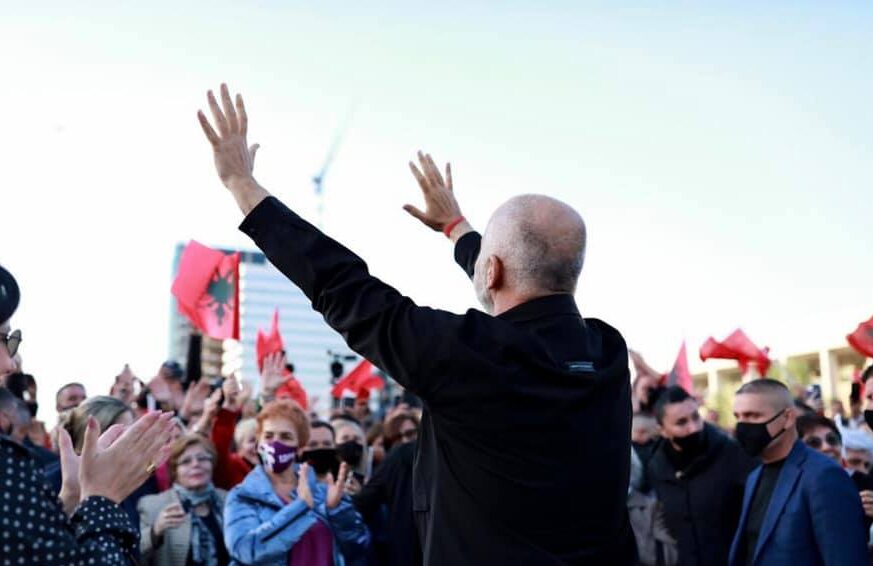 Parliamentary election in Albania was competitive, but the ruling party enjoyed the advantages of the incumbency. The opposition failed to attract enough undecided voters and has focused on the irregularities of the process in the days after the voting. Nevertheless, the elections have been orderly enough for the international community to congratulate the winner and call for a smooth formation of new institutions.

More or less, last week in Albania played out similarly to how electoral processes across the Western Balkans have been playing out for years, with occasional exceptions. The incumbent party prevailed, and the opposition will have to take a look at how to make itself more appealing to the voters, while the election observers, civil society, and the citizens will once again have legitimate expectations for a more fair race next time around.

Just several days after the election in Albania, Freedom House published its annual Nations in Transit report, which once again classified all six countries of the region as hybrid regimes, in which “leaders continue to allow somewhat competitive elections”, despite them not being free and fair. Consequently, a change can be achieved through the ballot box “if enough voters are willing to support new leadership”, though this requires unusual circumstances, Freedom House reminded, pointing at recent cases of Montenegro and Kosovo.

There weren’t enough voters in Albania this time. The Socialist Party of Albania (SP), led by Prime Minister Edi Rama, practically retained all votes it won in 2017 election and will have a working majority of 74 MPs out of 140,  the same as four years ago. The coalition around the Democratic Party (DP) improved its result, winning 59 seats compared to 43 in 2017, but this still was not enough for a majority, even with the opposition Socialist Movement for Integration (SMI), which saw its vote share cut in half and its MPs reduced from 19 to only 4.

Much like his Western Balkan opposition colleagues in recent years, leader of the Democratic Party Lulzim Basha used his first speech following the closing of the polls not to congratulate his opponent, but to highlight the unfairness of the process.

“We entered the battle not against political opponents, but against a regime that did everything to break the race, with tens of thousands invalid votes,… millions of euros spent to achieve the largest vote purchase, they stole citizen data and used criminals to commit an electoral massacre”, Basha said.

Indeed, the number of invalid votes was a record high, surpassing 80,000, while the difference between the SP on the one hand, and DP and SMI on the other, was less than 40,000. The calls for the matter to be investigated have come from multiple sides, including the President of Albania Ilir Meta, former leader of SMI, who announced his return to the party when his mandate expires.

In a post-election interview, PM Rama, in turn, stated that the opinion polls had predicted a very similar result to the actual outcome, which removes doubts of any serious irregularities. He also called on the opposition to concentrate on self-reflection, rather than the accusations against the ruling party.

The Election Observation Mission deployed by the Office for Democratic Institutions and Human Rights (ODIHR) still highlighting some of the irregularities in the very first paragraph of its Preliminary Report.

“The ruling party derived significant advantage from its incumbency, including through its control of local administrations and from the misuse of administrative resources. This was amplified by positive coverage of state institutions in the media. Allegations of vote-buying by political parties were pervasive during the campaign and a high number of investigations were opened in this regard”, ODIHR noted.

The Observation Mission pointed at the example of government ministers appeared at “inspection visits” of key facilities such as vaccination centers, wearing facemasks or t-shirts with “No. 12” (the SP ballot number). Prime Minister Rama also inaugurated several major infrastructure projects during the campaign period, a practice that has become all but a part of an electoral tradition in the region. On the other hand, President Meta was also found to have used a confrontational tone during the campaign, in contrast to his formally non-partisan role.

Executive Director of the Institute for Political Studies from Tirana, Afrim Krasniqi, is even more critical in his assessment of the process.

“The government massively used state resources in the campaign and built a system of political patronage over the totality of the Albanian citizens, a scandal that is under investigation by the prosecution”, Krasniqi says for European Western Balkans, adding that these arguments will take their toll on the future majority-opposition relations.

He says that the success of the Socialist Party lies in the use of widespread poverty and intimidation to collect votes through electoral machinery and preventing the undecided part of the electorate from going to the polls.

“To forestall this, the ruling majority conducted a negative campaign, leading to high political polarity and to the refusal of the undecided part of the voters to become part of the election campaign”, Krasniqi adds.

He, however, also says that, on the other hand, the main party of the opposition, the Democratic Party, despite an increase in the number of votes, failed to meaningfully expand its support base and to appeal to the undecided electorate.

“This was mainly due to the protracted lack of internal reform, the negative impact of leaving the parliament and abandoning local elections, as well as because of its leadership, with Mr Basha widely failing in his attempts to profile himself as a credible and effective alternative to Rama”, Krasniqi says.

Following the defeat, the calls for Basha, who has led the party since 2013, to resign, have started to come from the membership, and a former MP has already announced his candidacy for the chairmanship of the Democratic Party, now set to remain in opposition for a total of 12 years.

Looking ahead: Reforms needed, but will they materialise?

Despite the irregularities mentioned above, it soon became clear that the process was at a level acceptable for the international community, with the Ambassador of the United States to Albania, Party of European Socialists (of which PS is a member), and multiple leaders, including French President Emmanuel Macron, Spanish PM Pedro Sánchez and Greek PM Kyriakos Mitsotakis congratulating Rama.

Everything currently points in a direction where there will be some cases and investigations of election irregularities, but the new institutions will be formed smoothly in September 2021, according to the already determined schedule.

Opposition voters can at least find comfort in the fact that, unlike in other parts of the region, for example in Serbia, the opposition in Albania will still have a strong presence in the parliament and an opportunity to use that to its advantage.

“It is of crucial importance that the DP concentrates on strengthening its role as the opposition in the country, holding the government accountable and continuing its efforts for better governance. In addition to this strong opposition, Albania now needs a proactive and very well-organized civil society and independent media to counter the power of an already very powerful government in its third term”, says Blerjana Bino, Co-Founder of Center Science and Innovation for Development.

She adds that the election is deemed as a milestone in Albania’s path towards EU membership and the acceptance of the results is paramount for the European integration process and next steps such as the first inter-governmental Conference.

“At the same time, a proper investigation by relevant authorities of alleged electoral crimes such as vote-rigging, vote-buying, intimation of votes, massive personal data breach, and other issues must be carried out in full transparency of the public. In this way, citizens can rebuild trust in the process and Albania can ensure genuinely free and fair elections”, Bino concludes for EWB.

Afrim Krasniqi, in turn, believes that the serious and functional reforms will require wider talks and consensus, which is unlikely to happen in the face of deep tension and mistrust between the government and the opposition.

“The ruling majority will remain fragile and not in a position to undertake far-reaching reforms. The ruling majority has no impetus for internal reform and will have to pay a price for electoral compromises with business groups and young oligarchs who funded the campaign and delegated their people to the winning electoral lists”, he concludes.

For those who have lowered their expectations to meet the region’s current lackluster democratic standards, the elections in Albania probably went reasonably well, not counting the violence and a murder case that marked the closing weeks of the campaign. For everybody who, on the other hand, was unsatisfied with the status quo and hoped for a robust improvement, including in the electoral process, there are currently not many encouraging signs.

Project Assistant and Reporter at the European Western Balkans

.@NATO strongly supports the sovereignty and territorial integrity of a stable and secure🇧🇦 in accordance with the… https://t.co/Q117wWTQfg