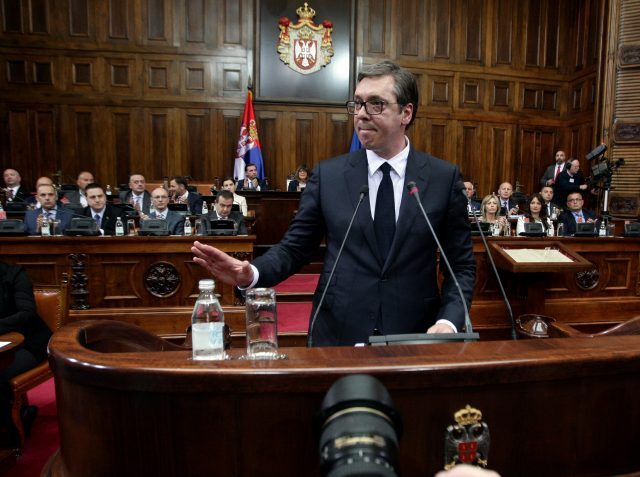 BELGRADE – President of Serbia Aleksandar Vučić stated that he will not sign the law on same-sex unions, which is in the process of preparation, deeming it unconstitutional, while the supporters of the law have been arguing that this is not the case. Analysts believe that the majority of Vučić’s voters oppose the law.

“I don’t know what the Assembly is planning when it comes to the law on same-sex unions. But, as the President of Serbia, I am obliged to protect the Constitution and I cannot sign that law”, Vučić said in last week’s interview for Blic, commenting on the proposed piece of legislation expected to enter the parliamentary procedure in June.

The President of Serbia can veto a law adopted by the parliament, but the parliament can override the veto with an absolute majority of votes.

In the current political environment of Serbia, in which Vučić is also the President of the highly-disciplined and hierarchical Serbian Progressive Party, which on its own has 170 out of 250 MPs and virtually no opposition, it is hard to imagine the parliament and the President genuinely disagreeing on any major issue.

“The drafting of the law and the launch of the legislative procedure would not have started at all if Vučić had not given his consent”, political scientist Boban Stojanović says for European Western Balkans.

President’s justification of why he thinks the law is unconstitutional has also raised eyebrows.

“Vučić explains that Article 62 of the Constitution states that a man and a woman enter into marital relations of their own free will in front of state institutions and that by signing the mentioned law he would violate the highest legal act of the state”, Blic reported.

“The Constitution refers to the Family Law, which defines marriage as a legally regulated union of a man and a woman. Therefore, I would not be able to sign the law on same-sex unions and I would return it to the National Assembly”, Vučić said for Blic.

However, as the primary initiator of the law, Minister for Human and Minority Rights and Social Dialogue Gordana Čomić has explained on multiple occasions so far, that the law does not regulate the legal institution of marriage nor the adoption of children, but other issues of same-sex couples such as inheritance and hospital visits.

The director of “Belgrade Pride”, Marko Mihailović, stated that LGBT activists are “confused” by the message of the President of Serbia.

“We think that it is quite strange that the President of Serbia, who also holds a law degree, raises the issue of the unconstitutionality of the law, which is absolutely not true. This law cannot be unconstitutional because this is not a law on same-sex marriage”, said Mihailović.

Asked how she comments on Vučić’s statement, Minister Čomić pointed out that Vučić also said that there is a possibility of changing the Constitution in this area.

Vučić was indeed asked by Blic if the ongoing process of changing the Constitution in the field of the judiciary can also be used to change the definition of marriage, to which he replied that he “did not exclude that possibility”.

If the Constitution were to change in this area, as well as in the area of the judiciary, it would have to be confirmed by the citizens in a referendum. There are still no indications that such a referendum for the changes in the field of the judiciary, which are a condition for Serbia’s EU accession process, will be held soon.

According to political scientist Boban Stojanović, there is no other explanation for Vučić’s statement than his attempt to excuse himself from the issue of the law, which is dominantly rejected by his majority-conservative base of supporters.

“The opinion polls have probably shown him that his voters are against it. I am not sure that the law will be adopted at all, it all depends on Vučić’s assessment of whether he will be politically damaged or not”, Stojanović says.

It is nevertheless the obligation of Serbia to introduce this law, through the analysis of the judgment Oliari and Others v Italy, where the European Court of Human Rights (ECtHR) has established the legal precedent regarding the necessity of the recognition of same-sex relationships within the Council of Europe (CoE) member states, a recent policy paper reminds. Serbia has also been urged by European Parliament to regulate the position of same-sex couples in its most recent Resolution.

In Stojanović’s opinion, this is why Vučić chose Gordana Čomić, a former member of the Democratic Party known for her support for women and minority rights to be in charge of the adoption of this law, in order to present it to his voters as an initiative coming from an independent official, and not himself or SNS leadership.

Delays, controversial criteria for election of new members of Board of Agency for Prevention of Corruption

Pendarovski: There is no EU government that opposes opening of negotiations

Žbogar: We expect EU to open the negotiations with North Macedonia in June