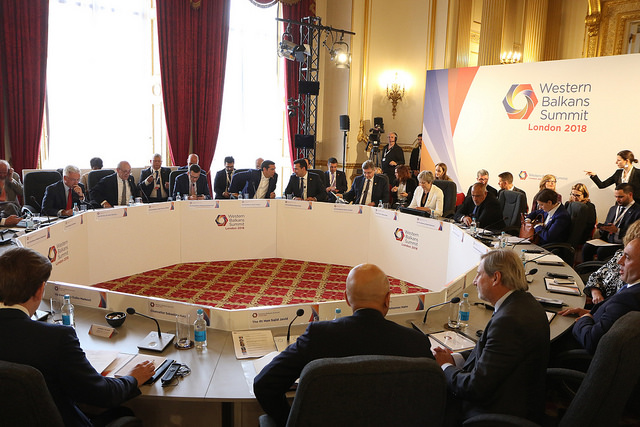 GENEVA – Corruption is both a cause and consequence of a criminal culture that permeates the Western Balkans, and the way that corruption is linked to politics suggests a degree of organized, systemic corruption, and elements of state capture, in a number of countries in the region, find the new reports on the anti-corruption practices in the region.

The two new reports have been released this week as part of the ‘Infrastructure of Integrity’ series by the Global Initiative Against Transnational Organised Crime, looking at the phenomenon of ‘organized corruption’ in the Western Balkans and monitoring implementation of the anti-corruption pledges that governments of the region made in the framework of the Berlin Process.

A report entitled Western Balkans Anti-Corruption Pledge Monitor lists the pledges that were made and tracks what progress has been made since 2019. It is one of the few if only, comprehensive evaluations of the implementation of the 2018 Berlin Process anti-corruption pledges.

A second report entitled Political Economy of Organized Corruption and Anti-Corruption looks at the factors that enable organized crime to flourish in the region and the impact that this has.

It points out that while significant progress has been made in putting in place appropriate anti-corruption legislation, institutions and strategies, the effective use of these measures and bodies is too often lacking. The result is what the report calls ‘organized corruption’ – a symbiosis of organized crime, criminal methods and high-level corruption, which creates a crooked ecosystem that enriches and protects those with access to power.

“Organized corruption is not only about systemic illicit financial gains and undue influence in decision making but also about systemic ‘buying’ and ‘influencing’ of social support to gain or stay in positions of political and economic power” explained the lead author the report Uglješa (Ugi) Zvekić.

John Penrose MP, the United Kingdom Prime Minister’s Anti-Corruption Champion and Mark Shaw Director of the Global Initiative against Transnational Organized Crime welcomed the growing focus on anti-corruption under the auspices of the Berlin Process and said that “we hope that these reports will help inform delivery of ongoing and future anti-corruption initiatives, such as the Illicit Finance and Anti-Corruption Roadmap.”

Delays, controversial criteria for election of new members of Board of Agency for Prevention of Corruption

EWB SCREENING / Marko Dašić: The Washington agreement is not dead, the United States does not support border changes

Number of Western Balkan immigrants in Germany on a sharp rise

Open Call: Executive Director of the European Fund for the Balkans