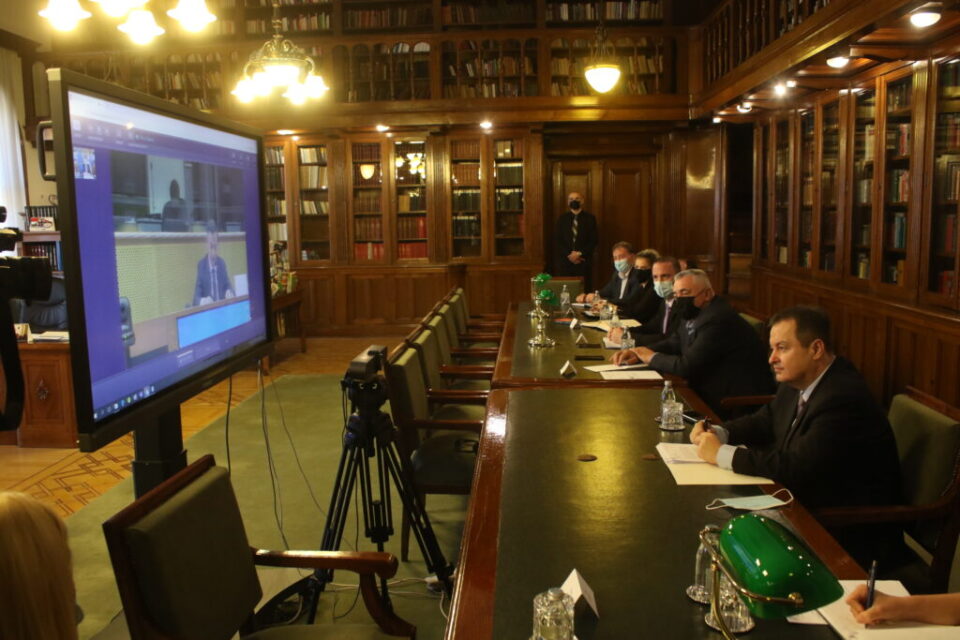 BELGRADE / BRUSSELS – Facilitators of the Inter-Party Dialogue in Serbia, MEPs Vladimir Bilčik and Tanja Fajon and former MEPs Knut Fleckenstein and Eduard Kukan, concluded the first set of individual online meetings with the ruling and opposition parties in Serbia last week. By the end of May, the facilitators will once again meet with Speaker of National Assembly Ivica Dačić and try to formulate an agenda for the continuation of the Dialogue, with a view of the possible arrival to Belgrade in June, Dačić announced.

Facilitators are still scheduled to meet with Prime Minister Ana Brnabić and with the Government Working Group in cooperation with ODIHR. They will also hold meetings with civil society organizations in Serbia.

Following the meetings with parliamentary groups in April, facilitators have now met with the extra-parliamentary opposition that boycotted the 2020 elections, which presented them with its demands.

“The consultations have given us important insights into the current political situation of the country and ideas regarding the areas on which we will focus our future work,” said EP facilitators in a joint statement.

Media reporting remains the most important issue for the opposition politicians, who stress that the television channels with national coverage are biased towards the ruling party and demand more coverage and appearances. A recent study by BIRODI, a think tank, indeed showed that from December 2020 to April 2021, President Aleksandar Vučić alone appeared for 41 hours in the prime-time news slots of the national television channels and cable channel N1, with mostly positive coverage, while the opposition as a whole appeared less than 7 hours, with mostly negative coverage.

Other issues include preventing the pressures on voters employed in the public sector, as well as holding local elections,  particularly Belgrade elections which must take place by April 2022, separately from the elections on the national level.

There are already indications that the Government will insist on amending the existing laws regulating the accession process as the central part of the Dialogue’s outcomes, which is not among the main demands of the boycotting oppositions.

Former MP Đorđe Vukadinović, who participated in the meeting together with the representatives of People’s Party, stated that the MEPs would probably ask the four groups to prepare for joint participation in the Dialogue with the ruling parties.

Speaker of Parliament Ivica Daćić also said on Friday that he had informed the facilitators about the outcomes of the parallel dialogue launched by the ruling parties with the opposition which rejects EP mediation. Both processes are expected to run in parallel.

Analysts have previously assessed for our portal that the so-called “second lane” of the Dialogue serves to undermine the process led by the European Parliament and that most of the participants are satellite parties of the ruling coalition, which did not have major complaints about the electoral conditions and participated in last year’s election, failing to cross the 3% threshold.

In a separate press release, EP facilitators commented on the rejection of EP mediation by some parties, which was how the ruling parties justified the organisation of the parallel dialogue.

“We naturally regret this attitude but underline that the Inter-Party Dialogue is a voluntary process and based on the commitment, willingness and ability of the participants to achieve consensus in order to improve the political climate ahead of the next elections”, the EP facilitators said.

The Inter-Party Dialogue was originally launched in 2019, following the announcement of the leading opposition parties that they would boycott the 2020 parliamentary election due to the lack of conditions for free and fair elections in Serbia. Limited reforms agreed during the first phase of the Dialogue failed to prevent the boycott of the elections, leaving the Serbian parliament without a viable opposition.

The second phase of the Dialogue was launched in March 2021, with the aim of reaching an agreement between the parties before regular presidential elections and Belgrade local elections, which need to take place by Spring 2022. Snap parliamentary elections were also announced by President Vučić.