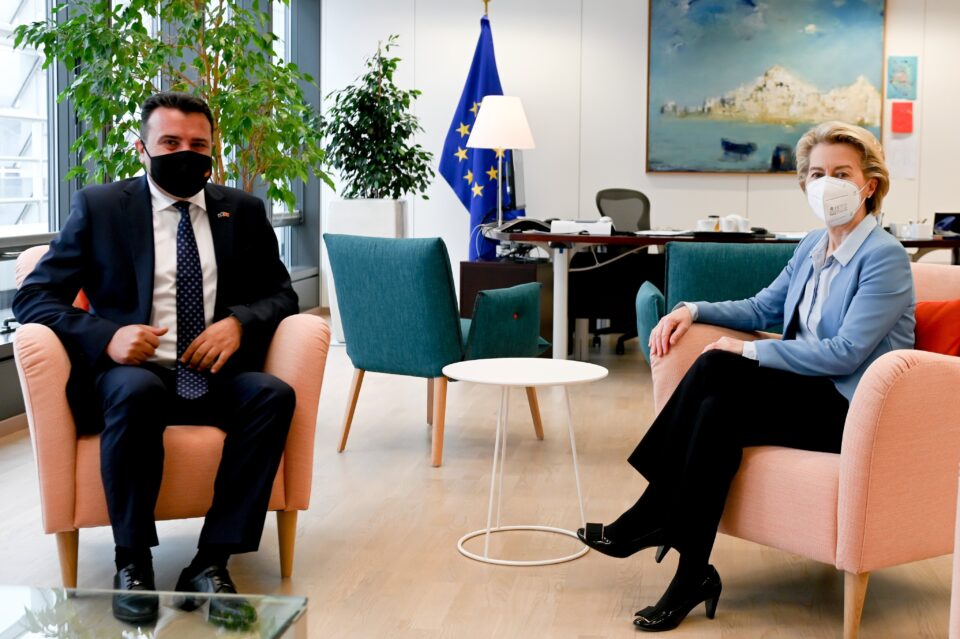 At the meeting with von der Leyen, which was attended by the Deputy Prime Minister for European Affairs Nikola Dimitrov and Foreign Minister Bujar Osmani, Prime Minister Zaev expressed expectation for active involvement of the EC in finding a solution to unblock the negotiation process of the EU with North Macedonia.

Zaev also stressed that the Macedonian language and the Macedonian identity imposed as issues by Bulgaria should not be the topic of talks and the engagement of Brussels, the Government’s press release reads.

“Macedonian identity, in addition to being a matter of pride, is also a matter of facts, science, tradition and national symbol of our people. It is not and will not be the subject of negotiations. European values ​​are a guide for us, but the protection of identity is also a European value,” said Prime Minister Zaev at a meeting with President von der Layen.

Zaev added that North Macedonia has implemented all reforms and that all EU criteria for opening the membership process have been met.

The EU stands by North Macedonia in this difficult time, including by sharing vaccines.

I reconfirmed our strong support for opening accession negotiations with North Macedonia. pic.twitter.com/PNmBDDEzyp

“North Macedonia has made steady progress and the EU looks forward to helping support flagship projects in the field of green energy and transport, through our Economic and Investment Plan for the Western Balkans”, von der Leyen tweeted

In his meeting with Zaev, Commissioner Várhelyi stated that the EU is committed to the Western Balkans and that today, after two and a half years, a strategic debate on the Western Balkans is being held in the Foreign Affairs Council of the EU, in which unblocking the European path of North Macedonia is the number one priority. He said that Brussels is making every effort and supporting all ideas for solutions in order to unblock this process.

Zaev said that the Technical Government in Bulgaria may be an opportunity for a solution soon, but we expect the other side to be encouraged for openness, readiness and commitment to a solution.

Zaev also met with Special Representative for Belgrade-Pristina Dialogue and other Western Balkan issues Miroslav Lajčak, and is scheduled to meet with High Representative Josep Borrell and President of the European Parliament David Sassoli.

Grenell: I hope that Kosovo and Serbia will soon find a solution