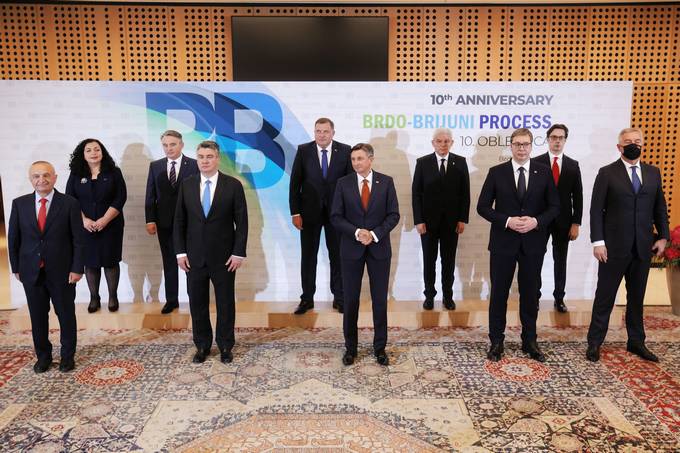 Meeting of the Brdo-Brijuni leaders, 17 May 2021; Photo: President of Slovenia

BRDO – At the summit in Brdo near Kranj in Slovenia, the leaders of the Brdo-Brijuni Process, which gathers Western Balkan states, Croatia and Slovenia, adopted a Declaration confirming their commitment to the enlargement of the European Union, following the joint meeting.

The Declaration stated that the absorption capacity of the EU was sufficient enough to accept Western Balkans as new members and that the leaders advocated the acceleration of the enlargement process, including the opening of accession talks with Albania and North Macedonia as soon as possible.

The leaders also welcome Slovenia’s intention to hold an EU-Western Balkans Summit during its Presidency of the Council.

The process of the adoption of the document, however, faced disagreements.

“There were certain disputes, misunderstandings. Let’s say that the agenda of Kosovo President Osmani was somewhat more ambitious and that due to Serbia’s opposition, some parts simply had to be lowered. I see that as a completely acceptable price of a document that is good,” said President of Croatia Zoran Milanović who, along with Slovenian President Pahor, hosted the meeting, Radio Free Europe reports.

President of Serbia Aleksandar Vučić stated that the proposal of Serbia, in which the countries would support the principle of not changing the borders “in accordance with the Resolution of the United Nations”, was not accepted. Vučić said last week that he had proposed this amendment to the Declaration, but that it was rejected due to the fact that Kosovo would be regarded as a part of Serbia according to that phrasing.

Due to this disagreement, the regional borders were only mentioned in the context of their decreasing importance in the view of future EU integration.

In addition to the Presidents of Slovenia, Croatia, Kosovo, and Serbia, the summit included their counterparts from Albania and North Macedonia – Ilir Meta and Stevo Pendarovski, as well as the members of the Presidency of Bosnia and Herzegovina, Milorad Dodik, Šefik Džaferović and Željko Komšić.

“We, the leaders of the Brdo-Brijuni Process, are advocating for a common strategic vision of Europe, whole, free and at peace. We underline our commitment to peace and stability, including good neighborly relations”, the Declaration adopted by the leaders reads.

It stresses that the Western Balkans are part of Europe, and without it, European integration cannot be finished.

“With the European Union membership, the borders between the Member States become less significant, which provides broader space for coexistence of a plurality of national identities”, the document reads.

Enlarging the EU with the entire Western Balkans is the EU’s political, security and economic interest, a geopolitical necessity and paramount political precondition for the stable, prosperous and sustainable future of Europe.

Through a more ambitious and purposeful enlargement process, the EU should more actively engage with all Western Balkans to encourage them to meet the well-established necessary conditions for EU membership as soon as possible.

The Declaration highlighted the areas of rule of law, democratization and the economy as the necessary reforms that need to be implemented “faster and more efficiently”.

“The absorption capacity of the EU is sufficient enough to accept Western Balkans as new members”, the Declaration underlined.

The leaders stated they strongly advocated the opening of membership talks with Albania and North Macedonia as a matter of urgency, as well as the removal of the Visa regime for the entire region (with Kosovo being the only country without visa-free access to the EU).

“We welcome Slovenia’s intention to hold an EU-Western Balkans Summit during its Presidency of the Council of the European Union, and its intention to involve the Western Balkans in the Conference on the future of Europe, that has started on May 9, 2021”, the Declaration reads.

The leaders reaffirmed their commitment to the Brdo-Brioni process on its 10th anniversary.

“Since its establishment, the Brdo-Brioni process has significantly contributed to the strengthening of good neighborly relations and regional cooperation. In addition, it has become a platform for honest and open conversations between leaders”, the Declaration reads.

Pahor and Milanović confirm difficulties in phrasing the document

President of Slovenia Borut Pahor stated that the President of Serbia tried to start a discussion on changing the borders which would prevent the recognition of Kosovo’s independence, FoNet reports.

Noting that Vučić and the President of Kosovo, Vjosa Osmani, met for the first time today, Pahor stated that the dialogue on the normalization of relations between Belgrade and Priština continues.

“Vjosa Osmani came with a very ambitious agenda, but we managed to reach some kind of compromise,” Pahor said.

President of Croatia Zoran Milanović stated that they managed to “lead the ship into the port without injuries”.

“We are here to help the countries of the region to get closer to the European Union because that is also in the interest of Croatia and Slovenia,” Milanović said, announcing that the next summit of the Brdo-Brijuni process would be held in Pristina or Belgrade.