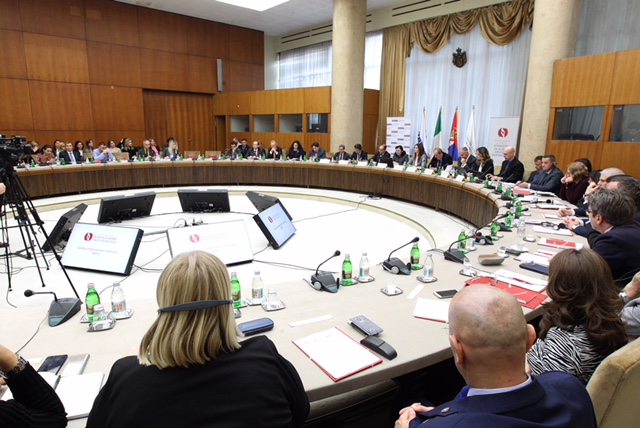 “Releasing governance from the state capture and democratic backsliding caused by the slow progress in squeezing out the corruption and allowing private interests to acquire a hold on government, can only be achieved by an alliance of stakeholders acting in concert”, concludes the 2020 Regional Anticorruption Report published by the Southeast European Leadership for Development and Integrity.

The report “Western Balkans 2020: State-capture risks and policy reforms”, released in April, reflects the overall corruption environment in the Western Balkans in an objective and quantifiable manner, by using the Corruption Monitoring System (CMS) as a methodology that ensures comparability of data across countries and registers the actual level and trends of corruption, as well as the public attitudes, assessments, and expectations in relation to corruption.

It emphasises some of the priority issues relevant to potential efforts for stemming common sources of corruption and provides a model for the advancement of integrity governance and the squeezing out of corruption in the Western Balkans.

As explained in the report, the Western Balkans have made progress in the past two decades in tackling corruption, which represents the heart of the European integration process and advanced anti-corruption standards have been adopted. Yet, there are still challenges because of which corruption still represents a not-negligible issue of this region.

”Slow and patchy anticorruption progress has allowed private interests to acquire a hold on Western Balkan governments resulting in state capture”, notes the report. It explains that although none of the countries is close to full state capture “there are critical impairments in the functioning of democratic and economic checks and balances”.

The report highlights a high level of monopolisation pressure at the national, sectoral or institutional level and ineffective anticorruption policies, rising the corruption pressure and acceptability of corruption among the citizens of the Western Balkan, weak implementation of the reforms adopted to enhance the integrity of the public administration and strong influence of the executive and legislative power over the judiciary as problems that are causing the proliferation of the corruption in the Western Balkans. Besides that, there are significant problems related to media freedom in the region that have contributed to its democratic backsliding.

„There is a decline in editorial independence, a weakening of public service media and inadequate accountability of media regulators in the region“, notes the report and adds that journalists and activists face pressure and intimidation and financing is being discontinued.

To find the way out, all stakeholders must take part. To release governance from this grip there must be an alliance of stakeholders acting in concert: reform-minded policy-makers, civil society and international partners, chief among which is the European Union, the report concludes.

„Higher expectations of starting accession negotiations might have contributed to the more positive results“, notes the report, but adds that the results are still far from good.

According to the report, monopolisation pressure in Albania is alarmingly high, especially in the sectors which are typically vulnerable across the regions – telecommunications and pharmaceuticals, but besides those, non-specialised wholesale trade, and retail sale of automotive fuel in specialised stores are sectors in which only Albania exhibit monopolisation pressure.

As noted in the report, Bosnia and Herzegovina displays the highest level of corruption pressure and this corresponds to a higher level of acceptability of corruption than the rest of the Western Balkan countries. It is explained that in BiH there is a non-negligible level of monopolisation pressure government and that it is especially concerning that this country has high private interest bias scores in the area of anticorruption, organised crime and money laundering. At the same time, the judiciary’s response to corruption is poor, particularly regarding cases of high-level corruption and organised crime.

“The regulatory environment is confusing, with incompatible provisions of both old and new laws coexisting, whereas regulation is not consistent across the whole national territory”, explains the report and adds that problems are also long-term unemployed youth and persistent account deficit from which the national economy suffers.

„Albania, North Macedonia, and Bosnia and Herzegovina add 2%, 6%, and 12% respectively to their already large pools of anticorruption sceptics who have lost any hope that a culture of democracy and rule of law is feasible in their countries“, explains the report and adds that „this calls for specific actions to engage local communities in anti-corruption, but also points to the urgent need of external anchoring and support from the EU“.

As the report explains, the anti-corruption policies in North Macedonia are deemed ineffective. It is noted that the strength of this framework is questionable as the implementation of different policies and laws is weak and selective in practice.

Also, when it comes to public sector integrity although in all of the Western Balkan countries the legal framework has been strengthened and new institutions set up or existing upgraded, the report pointed out that the practical results in North Macedonia are weak.

„In North Macedonia, the regulations still allow impunity for offenders and unfair use by the authorities of the disciplinary process“, explains the report.

As the report stated, in the Western Balkans, Kosovo is among those with the highest level of monopolisation pressure at the national, sectoral or institutional level, which calls for some changes.

„This calls for more thorough scrutiny of legislation, procurement concentration and the work of specialised regulatory bodies in critical sectors in all the Western Balkan countries, especially in Albania and Kosovo“, explains the report.

Important issues addressed by the report are ineffective antimonopoly law, the lack of public sector integrity since officials and those occupying senior positions are still highly vulnerable to undue political influences, and a dysfunctional judiciary.

„The implication of judges and prosecutors in numerous corruption affairs is generally perceived as one of the key problems of the judicial system in the country“, explains the report and adds that „both public and professional opinion consider political interventions in the judiciary in Kosovo as too obvious“.

Besides that, according to the report, when it comes to the hidden economy, Kosovo is the worst affected in the region with the highest hidden employment share and with 60% of the employed in the main job claiming to have no healthcare insurance.

„Still, it should be noted that Kosovo has achieved notable progress compared to 2016, when the percentage of cases with no health insurance coverage was 10% higher“, concludes the report.

A considerable level of monopolisation pressure, increased level of corruption pressure, high private interest bias scores at the area of anti-corruption, organised crime and money laundering prevention, dysfunctional budgetary inspection and ineffective legal framework regarding the public sector integrity are some of the problems that the report points out when it comes to the corruption in Montenegro.

Besides that, the report notes issues that cause the absence of the independent judiciary. Although the legislative framework has been improved, some parts have never been consistently implemented in practice.

„The process of electing judges is accompanied by numerous allegations of abuse of office, breach of procedure and conflict of interest“, explains the report and adds that „there are no sufficient guarantees of independence and impartiality of those members of the Judicial and Prosecutorial Council who come from the ranks of eminent lawyers, given that some of them are former representatives of political parties and the executive branch“.

Furthermore, the report draws attention to significant problems related to media freedom which is marked by an oversaturated market. That leaves individual outlets vulnerable to political and economic pressure.

According to the report, Serbia ranks worst across all Western Balkan countries by most of the factors enabling state capture – the ineffectiveness of anticorruption policies, lack of integrity, lack of impartiality and selective enforcement biased to private interests, especially on its critical proxy: private interest bias. Besides that, the problem is also a lack of public service integrity.

„The legal framework allows for too discretionary and potentially unfair dismissals of senior civil servants with political influence on senior managerial appointments is highlighted as an issue of serious concern by the EC“, explains the report.

Furthermore, the report noted the poor results in the fight against corruption and the need for a judicial reform that would strengthen the independence of the judiciary against political interference.

It also mentions the absence of media freedom, by drawing attention to the fact that all national television frequencies are either directly controlled by the government or owned by those with close ties to the people in power. This situation is a consequence of the country’s lack of publicly accessible data or registers on final beneficiary ownership of media cases.

„Overall, the political pressure and questionable ownership exert a significant negative effect on the media independence“, concludes the report.

Pahor in Kosovo: Changing borders in the Balkans should not be discussed