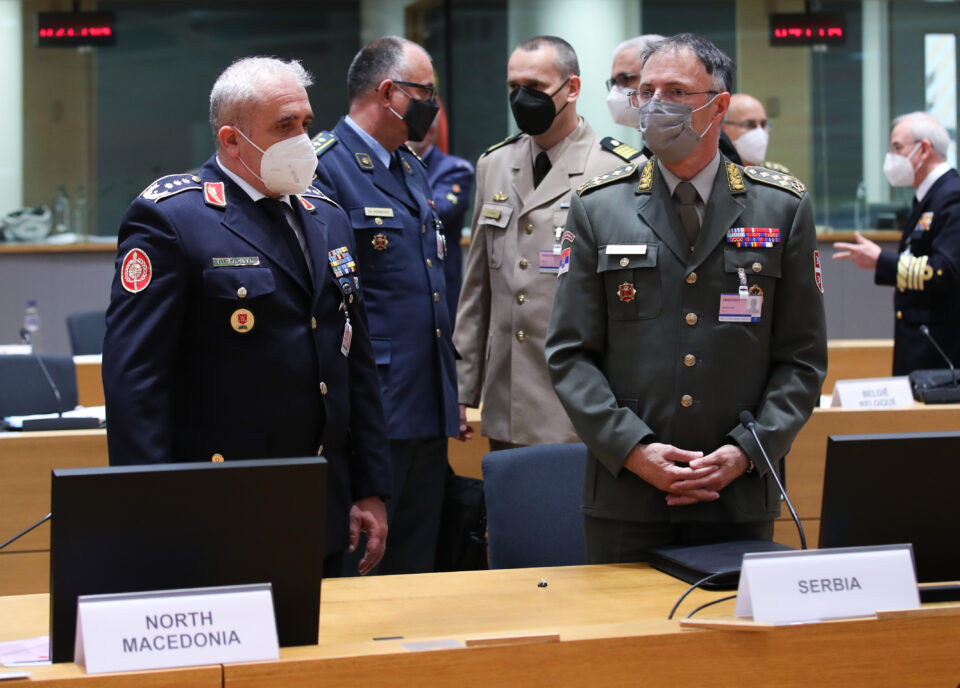 Chiefs of Defence of North Macedonia and Serbia at the meeting; Photo: European Union

BRUSSELS – European Union Military Committee held a meeting yesterday for the first time in 2021, with the presence of Western Balkan representatives. Among other things, the situation with EU military missions in Bosnia and Herzegovina, Libya, and Somalia was discussed, and the Member States were called upon to provide adequate resources, personnel, and logistics to the missions.

The meeting, which was held at the level of the Chiefs of Defence, was also attended by representatives of partner countries, including Serbia, North Macedonia, Montenegro and Bosnia and Herzegovina.

The meeting discussed the contribution of the partner countries to the training missions and operations of the European Union, in which members of the Serbian Army also have significant participation, it is stated in the Army’s announcement.

Representatives of the Serbian Army have so far been engaged in the EU naval operation EUNAVFOR-ATALANTA and the military mission established to strengthen EUTM-Somalia state institutions in Somalia, the EUFOR RCA military operation and missions in the Central African Republic, as well as in the “EUTM MALI” mission established to train the military and security forces of Mali.

At the meeting, the Chief of the General Staff of Austria Robert Brieger was elected chairman of the EU Military Committee from June 2022, as the successor of General Graziano.

The meeting was also attended by the Chairman of the NATO Military Committee, Air Marshal General Stuart Peach, during the part of the discussion on the relationship between the EU and NATO. CHODs recognised the need to take advantage of the concomitant developments of the EU Strategic Compass and NATO 2030 initiative, as a framework for improving the cooperation between the two organisations.

The meeting of the Military Committee was opened by the EU High Representative for Foreign Affairs and Security Policy, Josep Borrell.

“The number of emerging crises and new security threats is growing. Cyber, space, new technologies, climate change and other trends are having profound security and geo-political consequences. This requires the EU to do more and to do more together. As the demand for EU engagement is rising, its supply must keep pace”, the statement reads.

Borell initiated a discussion with the CHODs on greater flexibility and better equipment of the EU in dealing with future crises.