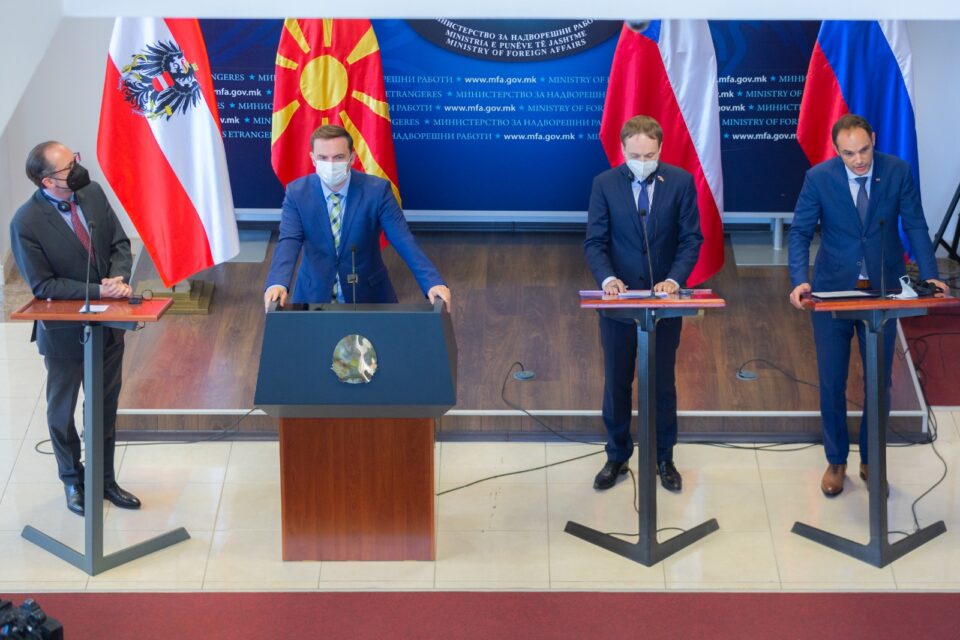 SKOPJE / TIRANA – Ministers of Foreign Affairs of Austria Alexander Schallenberg, Slovenia Anže Logar and the Czech Republic Jakub Kulhánek visited North Macedonia and Albania over the weekend, stressing that there should be no further delays in the countries’ accession processes.

The meeting with the Foreign Minister of North Macedonia Bujar Osmani focused on the dispute with Bulgaria, which is currently blocking the country’s EU accession process.

He highlighted the importance of the visit 30 days in advance to the meetings on European level, which, he said, should implement the decision of the Council from March 2020, which formally opened accession talks with Skopje and Tirana.

He said he believed bilateral issues should not block the accession process, but that “we must deal with the issues and therefore fully support the efforts of the Portuguese presidency, together with the ministers here and in Sofia.”

“This is a crucial time now, a crucial moment. Please understand that I do not want to go into details, this is an ongoing process but I really support everything that the Portuguese presidency has put on the table as a proposal,” Schallenberg said.

The Portuguese Minister of State for Foreign Affairs Augusto Santos Silva and the European Commissioner for Neighbourhood and Enlargement Olivér Várhelyi visited Bulgaria and North Macedonia on Friday, presenting a draft solution aimed at overcoming the problem between the two countries, though no details of the proposal have been released thus far.

The foreign ministers next traveled to Tirana where, in a joint press conference with Foreign Minister Olta Xhaçka, they also confirmed their support to the country, Albanian Daily News reports.

“When the six countries of the Western Balkans become members we will have achieved the vision of the continent. Albania has done its homework and is ready to open talks. Laws and regulations must be enforced. This is a process that needs to start and we need to be honest about it. We stand by you today and in the future,” Schallenberg said.

On the other hand, the Slovenian Minister said that Albania had fulfilled its task, now it was the EU that must stand by its words.