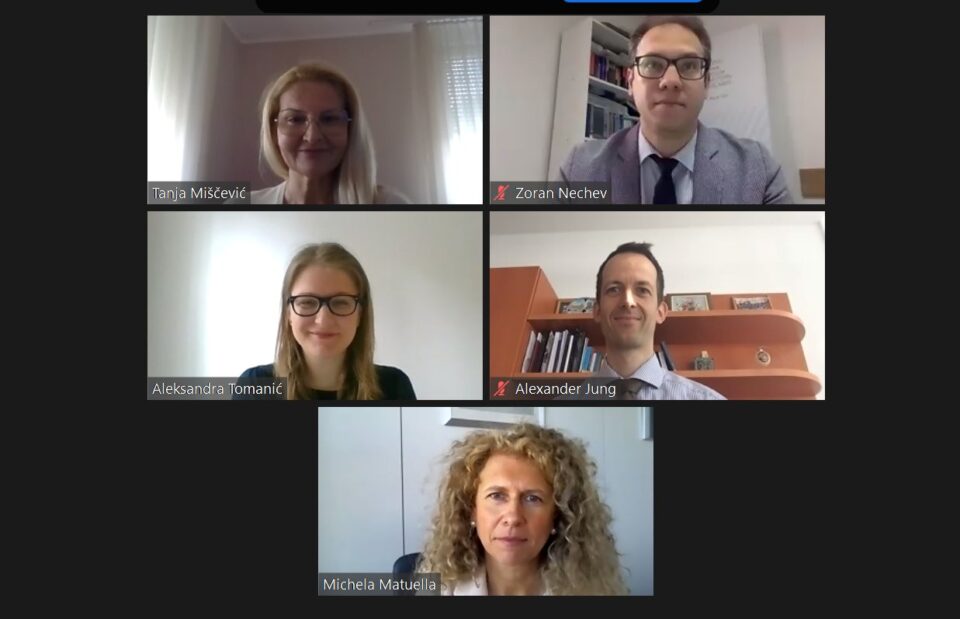 BERLIN – Civil Society & Think Tank Forum of the 2021 Berlin Process started today with a discussion on the achievements and the outlook of the Berlin Process, which is this year organized by the initiator of the process, the German Government.

The Forum was opened by a video message of the Minister of State for Europe at the German Federal Foreign Office Michael Roth, who said that the “Civil Society Forum is the essence of the Berlin Process”.

“By working together we can strengthen democratic societies and enhance the EU perspective”, said Roth, adding that violence against journalists in the Western Balkans was a concern, as was the democratic backsliding and polarisation.

Aspen’s @valeskaesch and Hansjörg Brey from @sudosteuropa are about to open this year’s Civil Society & Think Tank Forum! Thank you, State Minister Michael Roth, for the inspiration. pic.twitter.com/OqZvtzwxfO

The participants were also greeted, on behalf of the organisers, by Valeska Esch, Deputy Executive Director and Program Director Europe of the Aspen Institute Germany, as well as Hansjörg Brey, Executive Director of the Southeast Europe Association.

The opening remarks were immediately followed by the first panel discussion, Eight Years of Berlin Process: Achievements and Outlook, whose participants reviewed the intentions and expectations of the Berlin Process.

Michela Matuella, Acting Director for the Western Balkans at the European Commission’s DG NEAR, stated that the Commission had always seen the Berlin Process as an instrument for high-level political dialogue and had been supportive of it. She highlighted the regular meetings of the regional leaders as one of the biggest achievements of the process, which was a considerable change compared to pre-2014 atmosphere, when the first Summit was held in Berlin.

Tanja Miščević, Deputy Secretary General of the Regional Cooperation Council, also compared the current situation to the beginning of the process, saying that now there was much more local ownership from the Western Balkans than the region could have imagined in 2014.

“We should build upon that”, said Miščević, adding that 70% of the people in the region are very supportive of regional cooperation.

“Civil society should not be only a platform observing the reform process, but one of the most important regional players”, Miščević also said.

Alexander Jung, Deputy Head of Division 212 at the German Federal Chancellery, stressed that the Process had created many tables in the region, such as ministerial meetings, RYCO, closer connections between the civil society had.

Touching upon what Michael Roth had said in his opening remarks, Jung encouraged civil society organisations to find creative ways to engage in the process and remain critical towards national governments and EU institutions in order to push for the implementation of necessary reforms.

Aleksandra Tomanić, Executive Director of the European Fund for the Balkans, however, stated that there were still issues with the safety of journalists and even civil society in the Western Balkans, which also suffer from forms of state capture and other problems, including large emigration and air pollution.

According to Tomanić, the EU accession process of the Western Balkans was stuck. Michela Matuella, as the representative of the European Commission, on the other hand, highlighted the fact that the Commission was preparing to hold accession negotiations with four countries after a long period of time and that there were now new instruments for tackling the deficiencies in the rule of law.

The first day of the Civil Society Forum also features panels on reconciliation, the Green Agenda and the Connectivity Agenda, as well as working groups on various regional topics, whose policy recommendations as well as their expectations for this year’s Berlin Process Summit will be presented by designated rapporteurs and discussed with decisionmakers at the end of the Forum on Wednesday.