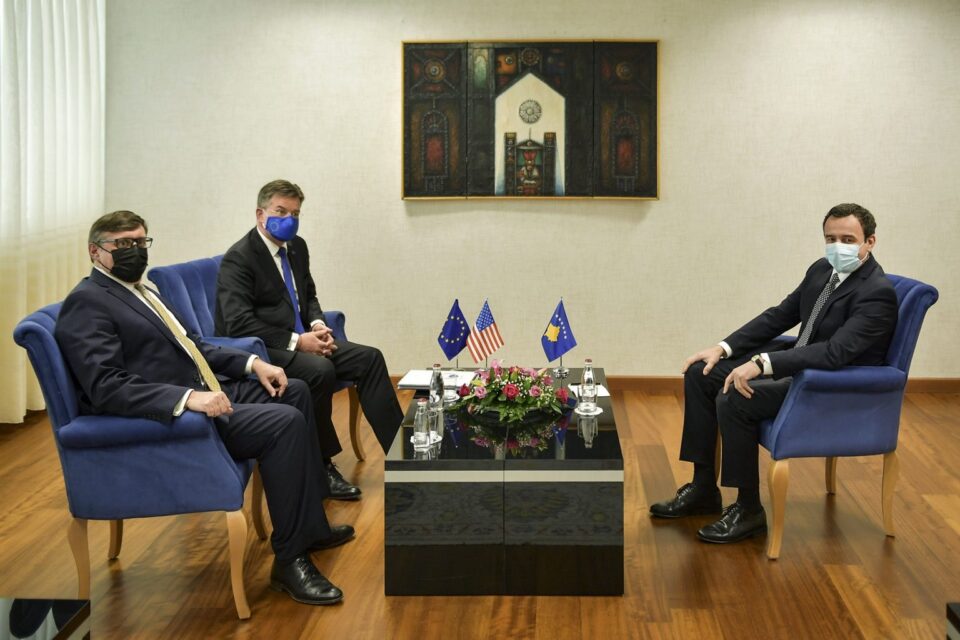 PRISTINA – The European Union and US envoys for Kosovo, Miroslav Lajčák and Matthew Palmer had a number of separate meetings with the authorities and opposition in Pristina, including President Vjosa Osmani and Prime Minister Albin Kurti and officials of the Serb List.

Both envoys had separate meetings with President Vjosa Osmani who told them that Pristina expects the dialogue with Belgrade to end in mutual recognition with full respect for territorial integrity.

KoSSev reported that during the joint meeting with Palmer and Lajčák, as the Office of the Kosovo President Vjosa Osmani announced that the dialogue process with Belgrade should end with mutual recognition of the two countries.

President Osmani underlined that for Kosovo, it remains essential that „territorial integrity, internal constitutional and state regulations and the country’s functionality are respected“ in this process. She also stressed that resolving the fate of the missing remains a priority.

„We expect that the process will end with mutual recognition, respecting these principles and that the agreement will be fully enforceable,“ Osmani said.

In a press release issued after the meeting with the American-European duo, the Cabinet of the Prime Minister of Kosovo highlighted that the dialogue should be „fair, principled and in the service of the people, overall peace and security.“

Kurti described the meeting as important particularly bearing in mind that it arrives ahead of the meeting in Brussels, scheduled to take place in mid-June, as well as after he met with opposition leaders, and before the parliamentary debate on the dialogue – i.e. „agreements reached in Brussels so far and the level of their implementation.“

Kurti also underlined the joint coordination of the EU and the USA in the renewal of the political dialogue, alleging that such „cooperation and coordination was welcome and necessary“.

Palmer: Kosovo-Serbia agreement is crucial in the attraction of more US investments

The Deputy US Secretary of State, Matthew Palmer, stated that a comprehensive agreement for the normalization of relations between Kosovo and Serbia is key in the attraction of more US and foreign investments in the country, as well as in the creation of more much-needed jobs for the citizens of Kosovo and the region, Euronews Albania reported.

While thanking the American Chamber of Commerce for promoting the economic partnership between both countries, Palmer said that the network of American Chambers across the region provides a productive framework in front of the current challenges, faced by the region.

Palmer also expressed his desire to hear from the members of the Chamber, regarding their opinions on the local business climate as well as the regional business climate; aspects, which are considered as high-priority for the agenda of the US in terms of promoting the regional economic integration and for the aim of decreasing the barriers preventing economic integration and the free circulation of people and capital.

He valued these aspects and deemed them as a framework for the integration of Kosovo into the European system, and ideally to the European Union, which is an objective of the US for the future of Kosovo.