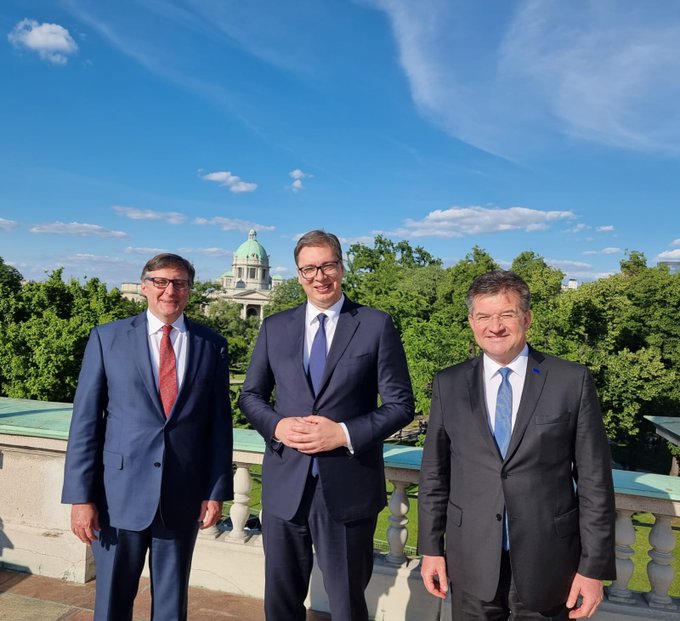 BELGRADE –  Special envoys of the EU and US, Miroslav Lajčák and Matthew Palmer met yesterday with the Serbian top officials. The topic of the meetings was preparations for the continuation of the dialogue between Belgrade and Pristina, which was announced for June in Brussels.

Before Belgrade, Lajčák and Palmer paid a two-day visit to Pristina to discuss the dialogue process with Kosovo officials.

President Aleksandar Vučić assessed that he had “good talks” with the EU and US envoys.

“The dialogue with Pristina will continue soon, and I believe in the possibility of reaching a compromise solution”, wrote Vučić on Instagram after the meeting.

Serbia officials to US Palmer: Belgrade committed to dialogue with Pristina

Ana Brnabić, Serbia’s Prime Minister, told Matthew Palmer, Deputy Assistant Secretary at U.S.Department of State – Bureau of European and Eurasian Affairs, and the US envoy for the Western Balkans, that one of her country’s foreign policy priorities was to intensify the cooperation with the US and that Belgrade remained committed to the dialogue with Pristina on the normalisation of relations, N1 reported.

“The boosting of the political dialogue and the highest-profile visits are in our interest, and I hope that we will have a chance to mark the 140th anniversary of Serbia-US diplomatic relations,” Brnabić said after meeting Palmer in Belgrade.

Regarding the dialogue with Pristina, she added that Belgrade “fulfilled all obligations and expected to see the same on the other side for the dialogue to have sense.”

Palmer, who came to Belgrade late on Wednesday after he visited Pristina, said the US strongly supported the dialogue under the European Union and its special envoy Miroslav Lajčák ’s auspices.

The US envoy also said that the media environment in which different opinions could be heard should be secured.

[EWB Interview] Hani: RYCO needs the governments’ support for the work that still lies ahead