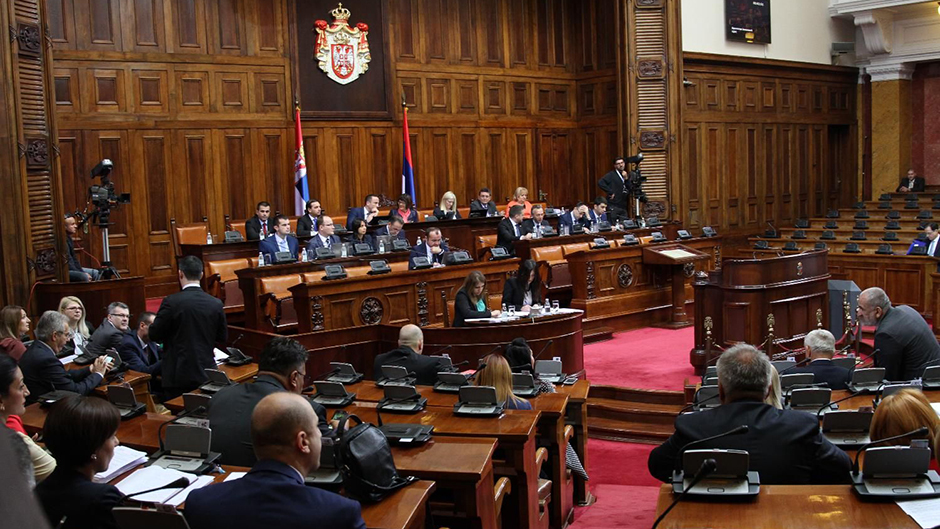 Session of the National Assembly of Serbia; Photo: FoNet

BELGRADE – National Assembly of Serbia voted last night to trigger the procedure for amending the Constitution in the field of the country’s judicial system, one of the conditions for its EU accession. The procedure now requires the Committee on Constitutional Affairs to draw up the amendments, which will then have to be confirmed by a two-thirds majority and by the citizens in a referendum. It is uncertain when both of these steps will take place, with the Assembly Speaker Ivica Dačić announcing that the referendum might take place in the autumn of this year.

Achieving a necessary two-third majority for triggering the process was an easy task for the ruling majority, given that the parliament was left without viable opposition following the partially boycotted 2020 elections. Due to this fact, a group of opposition parties assessed in April that the current parliament lacked the legitimacy to amend the Constitution and demanded the process to be postponed until after the new parliamentary elections.

The timeline of the constitutional reform remains uncertain, due to the fact that the referendum has to be called and confirmed by a sitting parliament. Serbia is scheduled to hold presidential and important Belgrade local elections by May 2022, while the snap parliamentary elections were announced by President Aleksandar Vučić following the last year’s boycotted elections, possibly at the same time as presidential and Belgrade elections. There is no legal requirement for them to take place until June 2024.

If, however, the parliament is to be dissolved by the spring of 2022, the process of amending the constitution, including the holding of an obligatory referendum, must be completed before that point in time. Speaker of the Assembly Ivica Dačić announced that the aim of the ruling coalitions was to complete the process by the end of 2021.

Responding to the opposition’s demands for the postponement, Dačić stated yesterday during an appearance on Radio-Television of Vojvodina that this was a requirement of Serbia’s EU accession process. He added that he personally preferred the current way in which the Constitution regulates the judiciary, rather than the proposed changes, but that the process would move ahead.

Constitutional reforms in the field of the judiciary have been one of the most important reforms Serbia needs to undertake in its EU integration process, but the original 2017 deadline has long passed. It was expected that the previous parliament, whose term lasted from 2016 to 2020, would decide on the issue, but this was postponed for unspecified reasons.

The aim of the constitutional reforms is to strengthen the independence of the judiciary. So far, the only publically available proposal of the amendments has been released by the Ministry of Justice of Serbia, in 2018. Ever since the Government of Serbia submitted the new proposal to the parliament to amend the Constitution in December 2020, the 2018 proposal has been regarded as the basis on which the Committee on Constitutional Affairs will draft its proposal.

The 2018 proposal has been met with criticism by a part of the expert community. They assessed that it did close one channel of influence on the judiciary by making the High Judicial Council and High Prosecutorial Council the sole institutions responsible for the election of judges and prosecutors, respectively. Currently, the parliament elects the judges who are taking office for the first time, as well as deputy prosecutors.

However, the experts also pointed that, according to the 2018 proposal, the ruling parties would de-facto remain in control of the election of judges by changing the composition of the High Judicial Council and High Prosecutorial Council, increasing the number of parliament-elected experts, and decreasing the number of judges and prosecutors. Finishing the Judicial Academy would also become a constitutional requirement for becoming a judge, with some arguing that this would enable the ruling parties, which will decide on the composition of the Academy, to remain in control over the judicial personnel.

“(The Government) has invested great efforts in drafting the amendments to the Constitution that look like as if they make the judiciary independent, but which essentially fail to do that”, assessed the Vice President of the European Movement in Serbia Vladimir Međak in a recent episode of EWB Screening.

As early as 2019, other experts expressed disagreements with the proposal of the amendments.

In 2018, the Ministry of Justice submitted its proposal to the European Commission for Democracy through Law (Venice Commission). After receiving proposals on how to improve the text in June 2018, together with the assessment that the public consultation process was “marred by an acrimonious environment”, the Ministry changed some of its proposals.

Following the changes, the Secretariat of the Venice Commission issued a Memorandum in October 2018, assessing that the changes were made in accordance with the recommendations of the Commission. This act caused controversy among the Serbian expert community due to the fact that it was the Secretariat, an administrative body, and not the Venice Commission experts, as in the case of June 2018 opinion, who made the assessment.

“NATO committed to building a strong partnership with Serbia”

Mogherini in Skopje: Confident that reform-oriented determination will continue