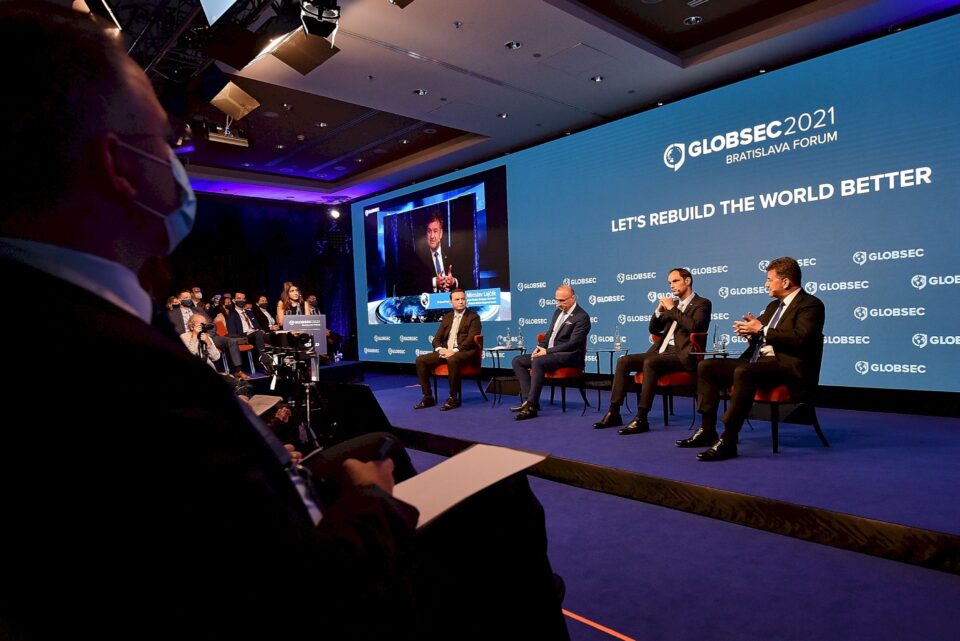 BRATISLAVA – Recent intensified communication and meetings between the EU and the Western Balkans show that the region is once again on the agenda. However, the EU still has problems with using the carrot of membership, concluded the participants of yesterday’s session “Geopolitical Europe at crossroads: Western Balkans in the post-COVID-19 era” organized in the context of GLOBSEC 2021 Forum in the capital of Slovakia.

Croatian Foreign Minister Goran Grlić Radman stated that “the Western Balkan belongs to the EU and belongs to Europe”. However, the EU seems not to stick with its promises, especially when it comes to North Macedonia and Albania.

Minister of Foreign Affairs of Slovenia, Anže Logar, said that, during the forthcoming presidency of the Council of the EU, his country would pay a lot of attention to the Western Balkans. It will address it as one of its priorities, which is also reflected in the planned EU-Western Balkans Summit.

According to Logar, the EU must think geostrategically and strengthen and maintain a high level of mutual trust with the Western Balkans region.

Logar and his counterpart from North Macedonia, Bujar Osmani, agreed that Skopje had met the required conditions, and it is now up to the European Union to pursue a credible enlargement policy.

Minister of Foreign Affairs Bujar Osmani emphasized that the Macedonian public prioritizes access to four freedoms, grants, loans, and education in the EU over the seat on the EU Commission or European Parliament.

Yet, due to the long wait for the start of accession talks, “the fuel for reforms and glue of different narratives” that have been keeping the integration process alive, weaken, Osmani said.

He believes the enlargement needs a restart, especially for North Macedonia and Albania and that would be the start of the accession negotiations.

The EU Special Representative for Belgrade-Pristina dialogue, Miroslav Lajčák stressed the EU is running away with the carrot of the membership every time the candidate countries get a little bit closer.

“Today we have a problem adopting the same language we adopted 15 years ago. That means we are no longer moving in the right direction … We don’t see the people, whose hopes are linked to the EU. We don’t see the image of the European continent, which also includes the Western Balkan countries,” said Lajčák, TAR reported.

He also stated that too much attention and importance is given to intergovernmental conferences, however, the political step on the North Macedonian accession was made already in 2020.

A controversial episode took place during the Q&A session, when Samir Beharić, Research Officer at the Balkan Forum, asked Special Representative Lajčák why should the Western Balkan leaders trust the EU promises, taking into account the EU failed to deliver visa liberalisation to Kosovo and accession talks with North Macedonia, to which Lajčák replied “if you don’t trust the EU, go somewhere else”.

The Special Representative said that the EU is never “begging” anyone to join and that it is a strategic choice of the regional governments. His comments sparked multiple negative reactions on Twitter.

The debate also touched upon the role of the third parties in the region, mainly China. Minister Logar stressed that it was expected of the candidate countries to align their foreign policy with the EU while having relations with third countries is their legitimate right. On the other hand, Minister Osmani said he was more worried about China from an ideological and hybrid threat perspective that might destabilize the region, even more, GLOBSEC summary reads.

The last topic discussed was Belgrade-Pristina Dialogue. Special Representative Lajčák said that Kosovo and Serbia do not have any other alternative than the EU integration process. What would help, according to Minister Grlić Radman is, nevertheless, a common and unified approach of the EU towards the recognition of Kosovo.