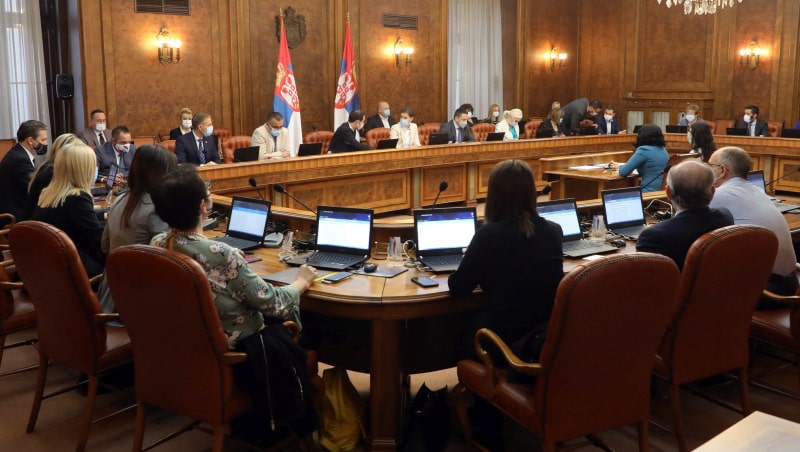 A session of the Government of Serbia; Photo: Vlada Republike Srbije

BELGRADE – Since the election of the new government in October 2020, which coincided with the annual report of the European Commission, Serbia has taken certain steps in reforms related to the rule of law and the state of democracy, but serious problems still exist, according to a new report published today by the Centre for Contemporary Politics (CSP).

The report analysed the Government’s performance in the area of ​​democracy and Chapter 23: Judiciary and Fundamental Rights. It is recalled that the Government elected in October, on several different occasions, was called upon to improve the situation in these areas by the top EU officials.

According to the report, most of the reform activities were of a formal and procedural nature, and many are in the implementation phase and have not been completed. Among the most important reform steps in the past eight months is the initiative to change the Constitution and several laws, as well as the establishment of working groups for electoral conditions and the drafting of various strategic documents. Some of them, such as the change of the Constitution, remain controversial in the eyes of the experts.

The report stresses that civil society organizations and professional associations have repeatedly warned that the National Assembly could rely on the text of constitutional amendments previously written by the Ministry of Justice 2018, according to which, instead of achieving full independence, only the channel of political influence on the judiciary might change.

CSP warns that there is reason to suspect that the level of awareness of the citizens of this important topic is very low.

It is added that there are serious problems that the Government still has not solved, which include the lack of progress in improving the election conditions when it comes to key problems – media imbalance, pressure on voters and abuse of public office.

Among other things, the report indicates that the Government does not plan to implement all reforms recommended by the OSCE, although it was called upon to do so by the report of the European Commission. So far, there is information that the Government is focusing only on “easier” and more technical areas, instead of the reasons why the opposition boycotted last year’s elections.

The report emphasizes that the problems of attacks on journalists and judges, as well as the capture of the media, have not been resolved, while the biggest corruption scandals, which are connected to the members of the Government, have not been investigated.

These are, among others, the “Savamala”, “Krušik”, “Jovanjica” and “Telekom Srbija” scandals. A judicial investigation into the potential involvement of members of the Government in these scandals was not conducted in any of these cases, and in the case of “Jovanjica”, it only includes the members of the police and security services.

The aim of the report is to provide a clear picture of the developments in the field of democracy and Chapter 23 for the period from the election of the new Government on 28 October 2020, to mid-June 2021, CSP stated.

The report is being published at a time when it was expected that Serbia could open new negotiation chapters with the EU, but, as announced, that will not happen. Serbia has not opened a new negotiating chapter with the EU since 10 December 2019, and the expert community connects this stalemate with the lack of progress, and even backsliding in the areas of rule of law and democracy, according to the report of the Center for Contemporary Politics.

However, at the same time, despite clear messages that these areas are crucial for Serbia’s progress towards the EU, the Report shows that serious problems continue to prevent significant improvements in these areas.

Read the full report on the website of the Centre for Contemporary Politics.